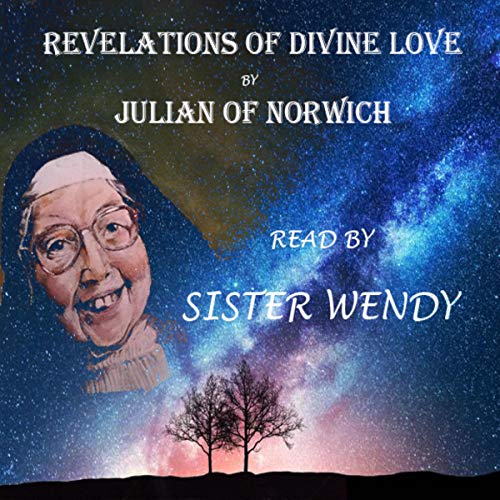 The Revelations of Divine Love

By: Julian of Norwich
Narrated by: Sister Wendy Beckett

Originally recorded in 1993, this is a remastered digital audio of BBC TV's Sister Wendy Beckett's narration of Dame Julian of Norwich's Christian Classic Revelations of Divine Love. This is an abridged version from the translation by M. L. del Mastro, published by Burns and Oates.

Sister Wendy said, "When I was at Oxford, I studied Julian in the original, and it made a great impression on me. My copy was a very small leather-bound book, and it had the lovely smell of sandalwood that old books sometimes have. Julian is forever associated in my mind with the smell of sandalwood, and I hope that a sandalwood smell comes across in this recording!"

Sister Wendy Beckett was a British religious sister and art historian who became well known internationally during the 1990s when she presented a series of BBC television documentaries on the history of art. Her programs, such as Sister Wendy's Odyssey and Sister Wendy's Grand Tour, often drew a 25 percent share of the British viewing audience. In 1997, Sister Wendy made her US debut on public television, and that same year, The New York Times described her as "a sometime hermit who is fast on her way to becoming the most unlikely and famous art critic in the history of television".

Julian of Norwich (1343-after 1416), also known as Dame Julian or Mother Julian, was an English anchorite of the Middle Ages. Revelations of Divine Love is the first written in English book by a woman.

What listeners say about The Revelations of Divine Love

Lovely to hear Sister Wendy's voice again. I was sorry to hear she had passed, and loved watching her on TV years ago. Julian of Norwich's words are timeless, and very uplifting. It is an abridged version (I imagine the full text might have been too long for Sister Wendy to read aloud!), but the adaptation is well done.

What a perfect match - Sister Wendy reading Julian of Norwich! Her obvious love for the text come over in almost every word. Where has this recording been?! I will be gifting this to my mother for her 80th.