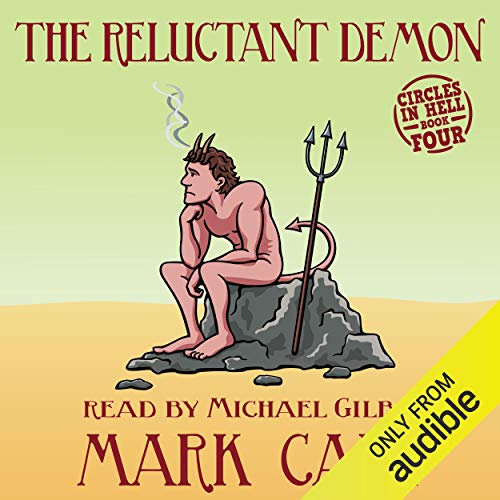 Satan has made a new demon, and he's a doozy, maybe the most powerful ever created. There's just one problem: this freshly-minted hellion isn't sure he wants the job.

In the wacky final volume of the Circles in Hell series, Steve Minion attends Beast Barracks, where he learns both the arcane and mundane arts of being a servant of the Devil. Strength, speed, and endurance are all part of a demon's physical makeup, but he must be taught to be sneaky, cruel, and ruthless and of course to ignore personal hygiene.

As Steve begins work as a full-fledged bad guy, he must confront the inevitable: demons exist to torment the damned, and Hell's former handyman-in-chief doesn't seem to have the stomach for the work.

Still, there's no alternative for our hero. Once a demon, always a demon, as the saying goes. Steve's stuck in his new role, but really, what good to anyone is a reluctant demon?

What listeners say about The Reluctant Demon

A truly brilliant series of books.
A great read with plenty of humour.
I really enjoyed these books.
Recommended 5star listening.

You must listen to this series!

What did you love best about The Reluctant Demon?

Great series. Funny, well written and very entertaining! Everyone will enjoy this series.

Who was the most memorable character of The Reluctant Demon and why?

I went through this book in one listen and am impatient to get to the next!

Well written. Great ending to the series. The only bad part is it's over. There is room for more to come and hopefully the author will return to the series or do some spin offs or shirts as the world is quite infinite. The narrator ranks amongst my favorites. The depth of voice and ability to create the voices and characters is truly spectacular. I received this book from the author narrator or publisher for free via audiobookboom in exchange for an unbiased review.

I have to admit I couldn't stop listening to this book I simply loved it.there are a few points that are kinda slow but all @ all its a great book

All 4 books are hilarious

I wish there were more books in this series. At first I wasn't sure about the narrator but now I couldn't imagine anyone else narrating it.

A satisfying conclusion to the Circles in Hell bks

This is apparently the last book of the series, and it shifts gears a bit as instead of a mystery or broken equipment, Steve has to deal with his new role as a demon in hell . The story progresses as we follow Minion through his attempts to become demonic. Favourite characters return, with some new ones added in, and there are still some wonderful plot surprises encountered.

Narration continued in the same vein as the previous 3 books. The tone and sound of characters remaining consistent with previous books.
Series can sometimes drop off as they progress, but |enjoyed this one as much as previous instalments. The entire series is worth listening to and this last book gives a nice satisfying conclusion .

This Audiobook was provided at no cost for an honest review.

hope this is not the final installment

(I received a free copy in exchange for an honest review.)

Oh, my. Listening to the second installment of this series (A Cold Day in Hell), I predicted a drop in interest after a few more windows into this uber-developed world. You know, like the Xanth series by Piers Anthony. But even with Mr. Anthony, it took about ten books for my adolescent mind to get bored by the whole thing.

So I’ve listened to four of Mr. Cain’s visions of Hell. I truly thought this beautifully envisioned world would suffer after we spent some time rolling around in this muck of an afterlife. Even though I’ve enjoyed the hell out of all three previous tales (pun intended), I even looked for a drop in writing quality, descriptions, unique turns of phrase…even a lessening of tiny little bombs of surprise and appreciation for vividly imagined characters.

But, I do believe I was wrong. And I am so glad to admit this mistake. Even though Mr. Cain drops us into Chaos, we have to remember that this version of the afterlife does play by some hard and fast rules. Yet, when we live inside Minion’s head for a while, just like him, we tend to forget all of those laws when day-to-day survival focuses on the tiny rules, the ones that Mr. Cain’s version of Hell compels its residents to follow to avoid misery. (Even though, this is hell after all and misery is just a part of it.)

I really do not like spoilers in reviews and avoid them as the populace of Hell avoids saying any words of Grace, so…

All I’m going to say is that Mr. Cain does a fantastic job of distracting the reader with the interesting minutiae of what it is like to survive in this Hell to the point that what should be a predictable end comes as a surprise where I smack my forehead saying, “Damn it, I should have SEEN that! Hell, Minion should have SEEN that one.”

Sometimes I believe a book would be just as good in either written or audible format. Sometimes I’m actually neutral in preference.

This is not one of those times. I believe that audible is the best format for these trips into the underworld. Mr. Gilboe has the perfect voice to transmit the oddities of Hell, a friendly voice keeping you company through a normal day of mundaneness, a beautiful distraction that pulls images from the imagination with little effort. Truly, there should be no other way to trip down Hell’s escalator than with Mr. Gilboe’s voice as an accompaniment. However, if we’re truly envisioning this version of Hell, it would not welcome us with Mr. Gilboe. The welcome message would be read by Gilbert Godfrey. But I hear he has a different position down there.

I am so happy that I stumbled on this author and this series. Each book was better than the previous one, creating in me a sense of old friends. Perfect pairing of story characters and narrator.

What did you love best about The Reluctant Demon?

The entire Circles in Hell series is funny. Follow the adventures and trials and tribulations of Steve Minion from Super of maintenence of Hell to a graduate of Demon Academy. If this the finale of the series, I'll miss the witty writing.

There are quite a few - Steve, the main character. Boo, his trusty sidekick, Steve's succubus main squeeze, on and on.

The graduation ceremony and the celebration afterwards.

Laugh out loud. Though this one was a bit ..."darker, reflective" on the part of Steve than the others in the series.

The series is enhanced tremendously by the narration talents of Michael Gilboe. Good choice for these.

Thank you for the opportunity to listen and review these audio books!

Great addition to the story. Most read.

I am eager to see where Minion goes now. If you're a fan then grab this one, if not then grab the first!