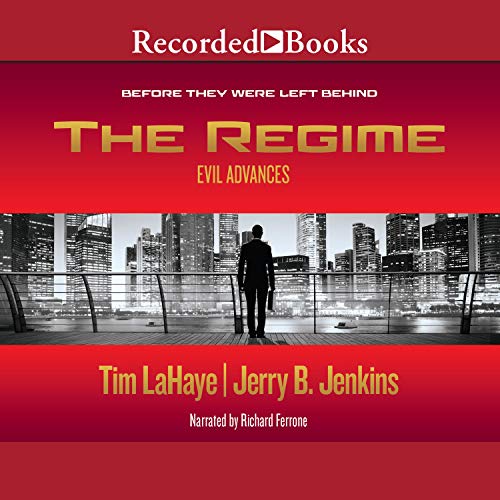 The Left Behind series is one of the greatest successes in the history of publishing, with each of the 12 original novels and the first prequel all cracking the New York Times best seller list. All together, more than 60 million copies of the books are in print, meaning they comprise the fastest-selling adult fiction series of all time. Phenomenally popular authors Tim LaHaye and Jerry B. Jenkins gave their devoted fans what they wanted, more, when The Rising began the Before They Were Left Behind series, the thrilling saga that leads to the events of the original books. Now The Regime propels the story forward.

As the Antichrist continues to rise, Rayford, Buck and Chloe live their lives unaware that the globe is hurtling toward the Rapture. But when events in Israel heat up, the drama intensifies, and humankind steps ever closer to the seven years of Tribulation.

"Among the best-selling fiction books of our times, right up there with Tom Clancy and Stephen King." (Time)

What listeners say about The Regime

Great story, but a different narrator

I very much enjoyed the story, but I didn't appreciate the change of narrators. The new guy pronounced names differently and hardly changed voices and accents for different characters like John Sondericker used to.

I have listened to the entire left behind series to this point and love how jack narrates the books. Very disappointed in the different narrator used in this book. If the story wasn't so good I would have stopped listening to this book. It sounds like this guy is chewing on something because you hear an annoying sound as he talks. Not sure why the change but the story is worth the displeasure of the audio.

I'm not sure what I like the most be it the action or the more details about the players in the original series. If it could be better, I would have the same guy who read the original books. But Frank Muller,having been nearly killed, and is now under intense medical treatment and.is facing a long term battle. I hope he is doing well and I'm truly sorry for his losses. This series makes you think, even if you're beliefs are not the same as the author. This book gives you cause to evaluate what your priorities are. Which is more important to you, your pride, your power, your prestige, your family and most importantly what is inside your heart and mind because what's in those places, decides what your life is truly about.

What I love most about this series is the character development. As the series progresses, you are invested in the characters as if they are friends, or enemies, you have known for years.

before they left behind series

book was great. looking forward to reading next book. always like the left behind books.

The noises this guy makes while talking is disgusting. I think he needs to drink water or something. His reading is pretty good, besides the gross noises. Although he makes the girl voices sound pathetic.

Loved the story.....not so much the narrator

Hats off to LaHaye and Jenkins for a great series! I was very impressed with the story and the conversations in regards to salvation and the bible references are spot on. I loved the character development throughout the story, but was not impressed with the narrator. While his expression and character voices were very good, there was an intermittent sound in the narration that sounded like he was eating something. Whether he was or not, it was detracting from the experience. I would have stopped listening, had the story not been so riveting. Luckily, I found the next installment with a different narrator. I plan on reading the Left Behind series on my Kindle, unless I can find them with another narration.

Half In / Half Out

Had good writing and some progression in the back story of Carpathia and his rise into power. I feel like the Carpathia in the Left Behind series was smoother and maybe this was a polishing period? Lot's of come to Jesus moments that had me somewhat annoyed, so I can imagine hearing it daily and weekly what that'd do. It's a technique to bend people to your will in a sense. IDK, parts of that were just fodder for the story.

The whole series is awesome as a truck driver I get to listen to a lot of books and the left behind series I listen to over and over. Jack Sondereker does the best performance of the 3 that perform these books but Richard Ferrone does great and his voices and inflection keep you tense for the next word