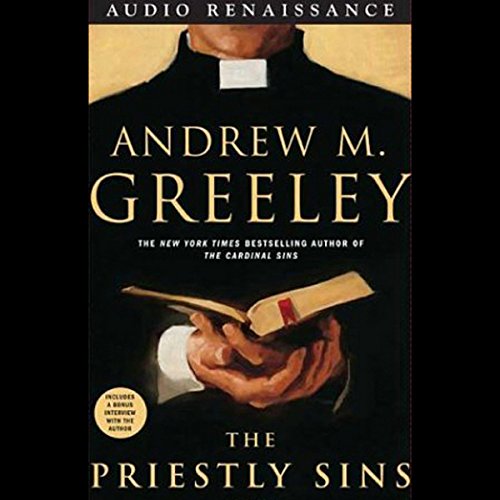 The Priestly Sins tells the story of Father Herman Hoffman, a gifted and innocent young man, who becomes swept up in "the Crisis" after witnessing child abuse in his first parish appointment. Soon, he is vilified for denouncing a priest who has been "cleared." He suffers the harsh fate of a whistle-blower when his Archdiocese has him committed to a mental health center. After his release, Father Hoffman is exiled by the Church to Chicago were he begins his graduate studies in immigrant history. There he encounters the legendary Monsignor Blackie Ryan, who helps him regain his confidence and demand a parish of his own. Reluctantly, the Church hierarchy assigns him to a dying parish. With zeal and charm, he revives the local church. His brief idyll is shattered by a subpoena to testify in a court hearing. If he speaks he will have to once again take on the establishment that is determined to destroy him. He faces exile not only from his parish but from the priesthood itself.
©2004 Andrew M. Greeley Enterprises, Ltd. (P)2004 Audio Renaissance, a division of Holtzbrinck Publishers, LLC

I have been a fan of Father Andrew Greeley for nearly 15 years. Starting with The Cardinal Sins on through The Priestly Sins I have thoroughly enjoyed Father Greeley's wit, his unapologetic view of the Catholic Church, and his continued love of that same church. There was a time when I stopped reading Father Greeley's books because they became to schmaltzy for my tastes, but The Priestly Sins is a return to the early Father Greeley. In this novel he takes on the abuse scandals that have plagued the Church in the last few years. While Father Greeley does not hold back in speaking out against the scandals, the abusive priests, and the Church hierarchy, neither is this a hatchet job. Father Greeley has some definate opinions on the failure of some in the Church to confront this issue and nip it in the beginning instead of allowing it to continue, to damage the lives of so many young people who trusted their Church. But moreover, Father Greeley still has an obvious love for his faith and its ability to heal, to forgive, and to bring joy into people's lives. Like Herman Hoffman in the novel, I'm sure Father Greeley will not endear himself to some Catholics, especially in the hierarchy of the Church, but then Father Greeley has never seemed to care about that, and he has done more to bring a human face, a humanizing quality to the men and women to who serve in the Church than anyone else. As someone who is not Catholic I may be able to look at this differently, but I truly believe this is one of the best novels Father Greeley has every written. Thr narrator, Oliver Wyman, was adequate, but at times it was very bland.

Would you consider the audio edition of The Priestly Sins to be better than the print version?

This story starts out big and flows slowly through so many torments of one priest. This was a short enjoyable story that was believable, even though it is fiction.

Priestly Sins is a Winner

I had ready only one of Father Greeley's previous books (The Bishop in the West Wing) when I selected this title as a travel companion for a business trip. At each stop, I would sit in the car and listen to the book until I absolutely had to leave the car to conduct business. Father Hoffman is a breath of fresh air and his relationship with his child-hood and adolescent sweetheart will stir memories of your own earlier loves. The narrator does a fine job with the Germanic and Irish accents in the text. This book is well worth a listen.

I am usually a fan of Greeley's, but this was a real disappointment. It isn't at all like the description of the book-really fell flat. Don't bother reading.

Did not love the beginning, so very graffic. Sparked my curiosity to continue to listen.