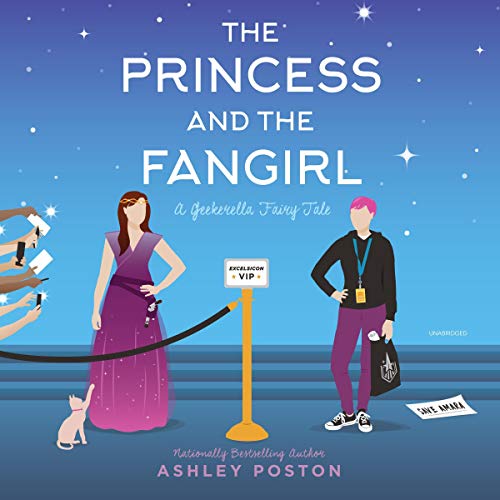 The Princess and the Fangirl

The Prince and the Pauper gets a modern makeover in this adorable, witty, and heartwarming young-adult novel set in the Geekerella universe by national best-selling author Ashley Poston.

Imogen Lovelace is an ordinary fangirl on an impossible mission: save her favorite character, Princess Amara, from being killed off from her favorite franchise, Starfield. The problem is, Jessica Stone, the actress who plays Princess Amara, wants nothing more than to leave the intense scrutiny of the fandom behind. If this year's ExcelsiCon isn't her last, she'll consider her career derailed.

When a case of mistaken identity throws look-alikes Imogen and Jess together, they quickly become enemies. But when the script for the Starfield sequel leaks, and all signs point to Jess, she and Imogen must trade places to find the person responsible. That's easier said than done when the girls step into each other's shoes and discover new romantic possibilities, as well as the other side of intense fandom. As these "princesses" race to find the script leaker, they must rescue themselves from their own expectations and redefine what it means to live happily ever after.

What listeners say about The Princess and the Fangirl

A super fun spin off

Ashley Poston did it again! I love this spin-off for Geekerella and the characters explored here are very fun. The exploration of fandom remains heartwarming and truthtul. Recommend to everyone who loves anything geeky.

Love how the first story line was incorporated into the second book and was so glad it all turned out how it did in the end.

the perfect sequel to Geekerella. it had me laughing out loud the whole way through

Let's get the obvious out of the way: anyone who's familiar with romantic comedies can predict many of the plot points of this book. But, as a certain website would tell you, Tropes Are Not Bad. And what matters in a romcom isn't the destination - it's the journey. Like its predecessor, The Princess and the Fangirl is a pleasant journey with likeable characters. It's got humor, nerd references, and some really nice moments between its principal players. Anyone who likes a solid romantic comedy is likely to enjoy this book.

Fans of Geekerella will be glad to see some returning characters, and this book also has a fair bit of LGBT representation, which is always a good thing to see. It also takes a pretty strong stance against toxic fandom and cyber bullying.

Having listened to the audio this time around, I genuinely wish I'd done so for the first book rather than reading it. The two protagonists are voiced by two different readers, and both of them do a good job bringing Imogen and Jessica to life. I liked the first book just fine, but I definitely enjoyed this one more, and I think their performances are part of the reason why.

Recommended if you like romantic comedies and/or stories with nerdy main characters.

Boring. Geekerella was so much better. DNF

Way too much time at ExselciCon. I can appreciate science fiction/fantasy/comic books, but it's too much. Also, I'm not a fan of LGBT plot lines. Everyone is free to love who they want, but I don't want to read about it.

Not what I wanted

It’s a lesbian love story. I wish they would let you know before you buy it, to expect alternative sexuality.

In your face same sex relationships

The same sex relationships weren’t in the background like in Geekerella, which I thoroughly enjoyed, but front, center, and shoved down your throat. Starting with two moms. a brother and his boyfriend, a lesbian starlet, and multiple trans dressers praised left and right, this book kraken its political agenda to the forefront so much as to make it difficult to see the potential fun of the story. It lost my attention before even the half way point. I couldn’t finish it.

Less enchanting than the first

Sure, they’re YA nerd romances, but I fully enjoyed Geekerella and found the characters relatively realistic and compelling.

Unfortunately for this sequel, the leads are relatively dull, the romance feels contrived, and there’s no real conflict that drives the story. I didn’t feel gripped by this novel and barely finished it. It feels like too many shallow stories and characters spread too thin. I also personally found the reader for Jess a little difficult to listen to. I truly wanted to love this one!

I liked this book even more than the 1st in the series. Sweet story and livable characters.

This was a cute sequel to Geekerella. I liked that the fairy tale twist was the Prince and the Pauper and that we saw more of Jess from the first book. Jess was a bit unlikeable at the beginning, she seems spoiled and complains about being in a super successful film, but when Imogene trades places with her, you see how controlled she is and that she just wants to do her own thing. Imogene was quirky and funny and I liked her relationship with her brother. Both girls had their own romances that were sweet and I liked how they played out. I felt like the pacing was slow and could have had more action. The narration on the audiobook was good, especially Jess's slight southern accent.

I love quirky, different and weird but this isn’t any of those things in a good way. If I wanted to listen to a woman pitch a fit I could just call a female friend. Honestly if I had a woman in my life that was this much a cry baby mess I would never answer her text or call.

By the power of fandoms!

Wonderful series about the power of geekdom and fandoms. If you’ve ever been a hardcore fan of just about anything, then you would understand. This time around we get a modern twist of The Prince and the Pauper when we follow celebrity Jessica Stone and her doppelgänger Imogen Lovelace as they switch places and try and right the wrongs going on in their respective lives. Both learn the power of fandoms along with the good, the bad, the ugly, and all that that entails.

Both narrators do a wonderful job with their characters.