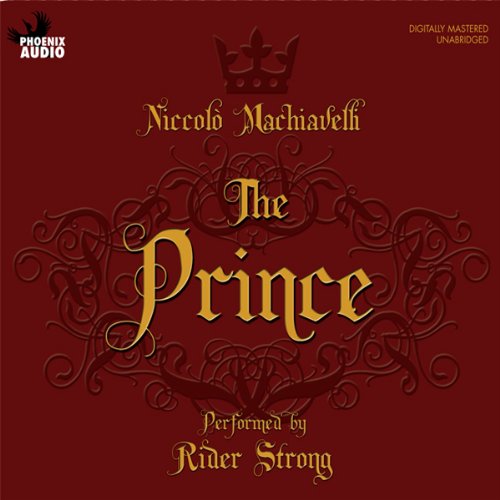 By: Niccolò Machiavelli
Narrated by: Rider Strong
Try for £0.00

When Lorenzo de' Medici seized control of the Florentine Republic in 1512, he summarily fired the Secretary to the Second Chancery of the Signoria and set in motion a fundamental change in the way we think about politics. The man who held the aforementioned office was none other than Niccolo Machiavelli, who, suddenly finding himself out of a job after 14 years of patriotic service, set a precedent for many a politician to come: He became a commentator and pundit.

Unable to become an on-air political analyst for a television network or a syndicated news columnist, he wrote a book. But what a book The Prince is! Its essential contribution to modern political thought lies in Machiavelli's assertion of the then revolutionary idea that theological and moral imperative have no place in the political arena. "It must be understood", Machiavelli asserts, "that a prince...cannot observe all of those virtues for which men are reputed good, because it is often necessary to act against mercy, against faith, against humanity, against frankness, against religions, in order to preserve the state."

With just a little imagination, readers can discern parallels between a 16th-century principality and a 21st-century presidency.

What listeners say about The Prince

Would you consider the audio edition of The Prince to be better than the print version?

The Prince and the Art of War by Machiavelli are must reads for any DOD or DOS member. One does not have to like his conclusions but his observations are right on. Plus it is a must read to understand the realist point of view.