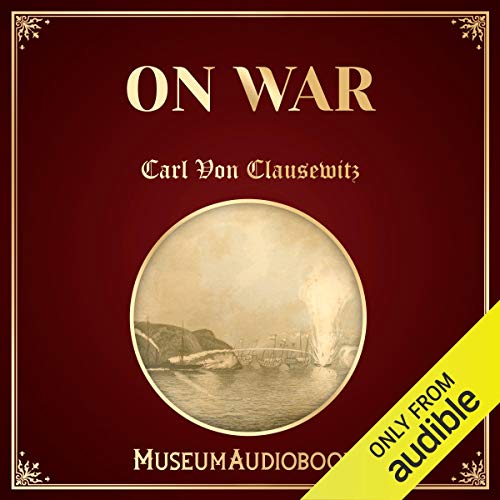 By: Carl Von Clausewitz
Narrated by: Fardeen MacKenzie
Try for £0.00

Carl von Clausewitz was a Prussian general and military theorist. On War (also widely known by its German name Vom Kriege) is considered to be Clausewitz’s magnum opus, despite the fact it remained unfinished at the time of his death.

Published posthumously between 1832 and 1835 by Clausewitz’s wife, On War delivers a deep insight into various concepts and schools of thought connected to war. Using a vast amount of historical examples, Clausewitz explores the political, philosophical, and ethical implications of war.

What listeners say about On War

The narrator has pronounced Irish/Scottish accent. I found him understandable, but others may find it distracting. This only contains Books 1-4 plus an introduction and credits. However, Clausewitz's "On War" has at least 8 books plus appendices.

This is not a complete book of On War.

I might be wrong. If so I will remove this review. This audio book only has 4 of Clausewitz books, there should be 8.

A classic sullied by poor performance and editing

Clausewitz is always great, but incredibly difficult to listen to as an audio book. The narrator’s efforts here are commendable (the translation is dense and challenging), but the experience is affected by poor editing and what seem like frequently repeated phrases or stuttering as the narrator returns to a phrase: it’s possible these are titles being read out, but it does not come off as such.

Anyway, useful refresher if you have read Clausewitz before, but first time consumers beware.

skip to chapter 6. the first five chapters are introductory and editorial material. but what i've listened to thus far is pretty ok.

His voice is absolutely horrible. It’s close to being a butchering of a great work.

A lot of information

What a book. This is by far one of the most difficult books to read and comprehend. Without firsthand knowledge, it is attempting to figure out what Clausewitz wanted to say and the context he was saying it in. Listening to the audiobook while also reading the physical book helped considerably.

A difficult book but better to listen to than read

On war is difficult. Clausewitz wrote in the style of German philosophers at the time, with lots of beating about the bush before (finally) getting to the point. However his basic points are just as true today. I would recommend this audiobook to any military professional.

The fact that he wrote in German makes it a more difficult book because translations are difficult due to the inexact nature of the language. However this translation was good, without the confusing/infuriating translation mistakes.

The book presents valuable information but energy needed to listen to it is exhausting and to me unacceptable. Style of writing and narration are definitely huge minuses to this otherwise valuable material.