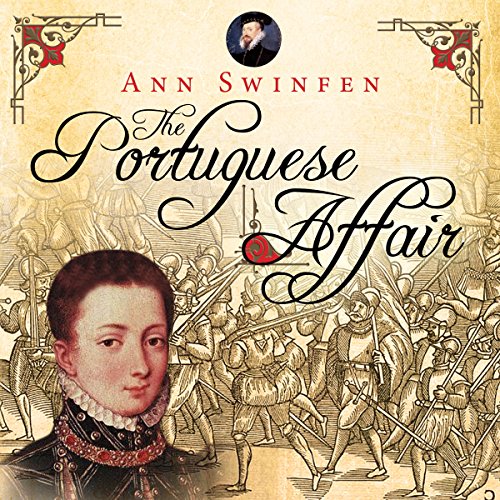 The year after defeating the Spanish Armada, England retaliates. The expedition to Portugal sets out to destroy what remains of Spain's Atlantic fleet, drive the Spanish out of Portugal, put the claimant Dom Antonio of Aviz on the throne, and seize the Azores. But from the time the English fleet, led by Drake and Norreys, reaches Plymouth, things start to go wrong. Christoval Alvarez, sent to carry out two missions by Walsingham, has a more important private plan in mind. Are any members of the family still alive? And what will become of the disaster-ridden expedition?

What listeners say about The Portuguese Affair

While I am a fan of Ann Swinfen and have enjoyed other books in this series and in her other series about medieval England, I found the raw and disturbing descriptions of warfare and suffering too much to bear and had to skip large sections. I do not doubt the historical accuracy of the events described but I did not enjoy the book and cannot recommend it.

Not as interetsting as other books in series. Hard to follow and depressing. Not as believable as others.

I really like Ann Swinfen and I liked the first two installments of the Alvarez series. Like the other reviewers, I found Book 3 to be somber and overall very depressing. But Swinfen is spot on in her depiction of the historical events of the English Armada which, as history knows, was a total and complete failure, so it's not that surprising that poor Kit endured hardship and witnessed horrific things during this enterprise. Swinfen could, however, have given us a glimmer of sunshine to contrast against the overall darkness of the book, but instead chose to keep the story very dark on all fronts. I was really frustrated with the upshot of Kit's personal mission but I suppose you can't expect happy endings all the time. This book also provides a lot of insight into what Kit and her family had to endure at the hands of the Inquisition, and it is just heartbreaking knowing that people are capable of treating others that way merely on account of religious differences. Such a sad time in history.

Was drake really that horrible?

I got a new perspective on drake. He really appears to be a horrible vain person. I assume it is historically correct? I knew Essex was a peacock which is accepted... there was a little bit of repetition at the end which got tiresome