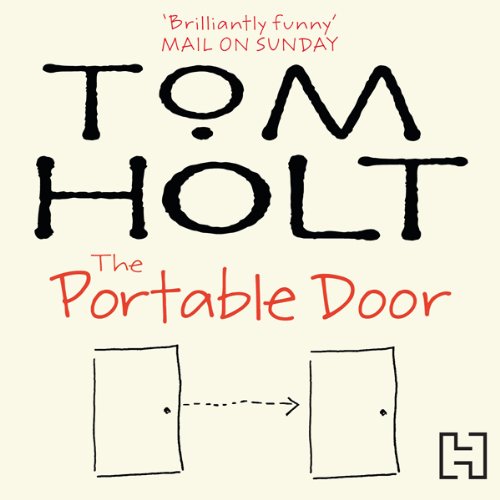 Starting a new job is always stressful (especially when you don't particularly want one), but when Paul Carpenter arrives at the office of J. W. Wells he has no idea what trouble lies in store. Because he is about to discover that the apparently respectable establishment now paying his salary is in fact a front for a deeply sinister organisation that has a mighty peculiar agenda. It seems that half the time his bosses are away with the fairies. But they're not, of course. They're away with the goblins. Mister Tom Holt, Master of the Comic Fantasy Novel, cordially invites you to join him in his world of madness by reading his next hilarious masterpiece.

What listeners say about The Portable Door

I have just listened to another of Tom Holt's books, and I like his style, and his very quirky take on life! I liked this book, too and I have the next one in the series in my library. Some parts are very funny, other parts are just silly, but it grabs you and you just have to listen to find the answer! Narration is good, without any annoying lilts that sometimes iritate me. It's not "Discworld" but it's not far behind!

Best belly laugh I've had in ages, from Tom Holt.

I was dubious about listening to Tom Holts The portable door as I had previously read the book & enjoyed it so much that I didn't want to be disappointed which usually happens when watching a DVD of a previously read book, however the quite the reverse happened, I could not disconnect much to the angst of my family. they sat in growing irritation & grew rapidly thiner due to them not being able to feed themselves, (that will teach them to find the food closet themselves). The narrative was far better than even my reading & Tom Holts quirky humour had me belly laughing all the way through.The story line of a luckless geek battling with the unimaginable was priceless,

A bad mix of better authors

I've never read tom holt before and I wouldn't say I'd bother again. It's ok as an easy read but if you've read terry pratchet, Neil gaiman. Douglas Adams or tom Robbins you'll probably find this book entirely predictable. It feels like a bad mash up of all the authors that do this genre...

I was a little bit hesitant about this book at the beginning, however as it progressed I found myself looking forward to the next chapters with anticipation.
I thoroughly enjoyed this book. I have the next books in my wish list.

Finally I've found another brilliant book series to read. Although The Portable Door starts slow, it's worth the wait, and the early mundanity is entirely complimentary to the story line. In fact the whole of Tom Holt's magical world is a beautiful beige in comparison to the perhaps rainbow colours of Harry Potter to which it nods it's head more than once. It's hard to ignore the similarities, but to Tom Holts credit, he uses the device of a parallel wizarding universe to invent a vastly different creation which has a lot in common with the drab but completely hilarious world of Adrian Mole. In summary then : Harry Potter meets Adrian Mole (in the best possible way). Brilliantly read by Ray Sawyer, and worth more than the one credit that I paid.

What other book might you compare The Portable Door to, and why?

This book is definitely from the Terry Pratchett school of writing. It is full of weird and wonderful creatures with a 21st century sense of humour.

It is a little slow to start, but hang on in there, it's worth it. I'm looking forward to reading more Holt in the future.

I love this book, the narration is great and easy to listen to, The story line is well thought out and makes the story run well.
Its a great easy listen, i will re listen to this when i need cheering up.

So well written, never understood why Holt's books don't get the attention they deserve. Every bit as imaginative as any writer out there.

Perfect for a long drive with teens!

Wow, what a find this series was by Tom Holt, and wonderfully narrated too! Superb! For teenage boys who'd been through Harry Potter, LOTR, The Book of Dust and Northern Lights Trilogy, our boys loved The Bartimaeus Trilogy, which we'd also recommend on audible. They love humour and there are loads of laughs in this story! What can you say about it, Pauls (one of the main protagonists) relatively normal, the story is too (in places) yet totally wacky, and keeps you guessing until the end. Can't wait for the next book!

Revisited The Portable Door after many years. It remains as fresh and entertaining as on that first reading. Dense with reference and sly humour it keeps the mind of the reader alert.

See if you can find 'Meadowlands' currently out of print, but worth the effort of securing a copy. It is a romp into the settlers of Greenland and full of well realised historical detail.

A weird one but worth it

It took me a little while to get into this story, but once I did, I found it fun and interesting. Really rather a delightful listen. The narrator was good too - brought the fun out in the book! If you want something fun, a little odd, and imaginative, give this a go.

Mildly amusing characters and dialog. But Tom Holt doesn't manage to write a story.
Chapter 1: main character geta a boring job and falls in love.
Chapter 6: besides from getting a stone with a sword delivered to his house and finding a lot of old things at work, nothing has happened up to this point. 2 hours about how they do paperwork in the office. And how boring it is.
I don't think I will finish this book because I'm falling asleep all the time..

For a couple of days I was lost to my family as I was constantly listening to it with my headphones on. Cant wait to start volume 2.