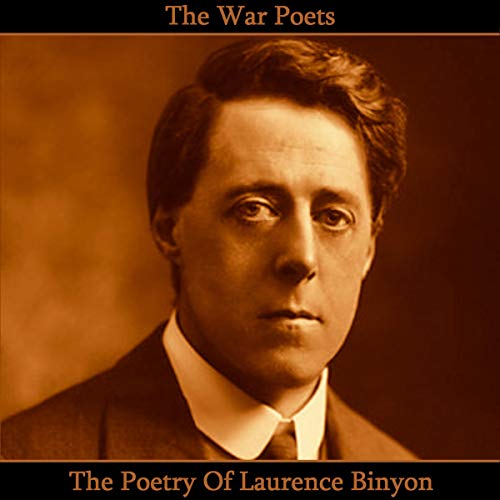 The Poetry of Laurence Binyon

He studied at St Paul's School, London, before enrolling at Trinity College, Oxford, to read classics.

Binyon’s first published work was Persephone in 1890. As a poet, his output was not prodigious, and, in the main, the volumes he did publish were slim, but his reputation was of the highest order. When the Poet Laureate, Alfred Austin, died in 1913, Binyon was considered alongside Thomas Hardy and Rudyard Kipling for the post, which was eventually given to Robert Bridges.

Binyon played a pivotal role in helping to establish the modernist school of poetry and introduced imagist poets such as Ezra Pound, Richard Aldington and H. D. (Hilda Doolittle) to East Asian visual art and literature. Most of his career was spent at The British Museum, where he produced many books, particularly on the art of the Far East.

Moved and shaken by the onset of World War I and its military tactics of young men slaughtered to hold or gain a few yards of shell-shocked mud, Binyon wrote his seminal poem 'For the Fallen'. It became an instant classic, turning moments of great loss into a national and human tribute.

After the war, he returned to the British Museum and wrote numerous books on art, especially on William Blake and Persian and Japanese art.

In 1931, his two-volume Collected Poems appeared, and in 1933 he retired from the British Museum.

Between 1933 and 1943, Binyon published his acclaimed translation of Dante's Divine Comedy in an English version of terza rima.

During the Second World War Binyon wrote another poetic masterpiece, 'The Burning of the Leaves', about the London Blitz.

This volume comes to you from Portable Poetry, a specialised imprint from Deadtree Publishing. Our range is large and growing and covers single poets, themes, and many compilations.

What listeners say about The Poetry of Laurence Binyon