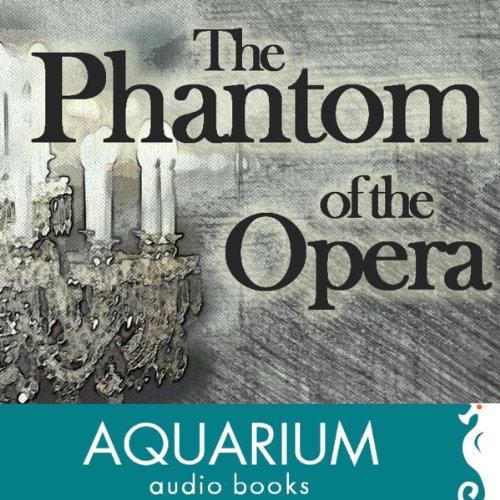 The Phantom of the Opera

In a Paris Opera House, Chorus singer Christine Daaé develops a relationship with a disfigured Phantom, who she believes to be the Angel of Music, promised to her by her late father.

The Phantom tutors Christine, but the relationship breaks down when the Phantom discovers Christine's love for her childhood sweetheart Raoul. Who will win Christine's heart and with what consequence?

What listeners say about The Phantom of the Opera

The story is entertaining , if a little on the long side and boasts some interesting characters. The plot is both clever and tragic, and as we learn more about the phantom, the more we realise that he is a desperate and broken soul. The audio reading is bright and energetic, the characters brought to life with brilliance. There's nothing flat or monotone about this production. Worth a listen, but don't confuse the story with the musical version. It differs!

Easy read, not a great work of literature but fun. The performance was solid and didn't bother me at all. Gaston Leroux seemed to think far too much of himself.

I love this story but when I'm in the car I can't understand everything that the reader is saying because he lowers the voice too much in many places, and then is too loud. I got tired of it and stop listening.

Different but The Original.

I’ve seen the Webber musical a number times all over the world and the movie once...
But in these pages is where all the movies, major Motion picture and the beloved musical was adapted. It is what all based on this.

I consider myself to be a true Phantom follower growing up, now and for the rest of my life. The different stories that followed the book have some similarities and overtones to this original work and some and some never heard or listened to. This book is far more detailed from it’s “descendants”.

I feel that this book, written more than 100 years ago, will stand the test of time as a great literary work that stirs the soul as it is a beautiful and not so beautiful story unlike any other. It stirs the sole, the heart and the imagination.

The narration was very well done, however the volume kept changing and it was very annoying. One minute, I have to turn the volume down because the narrator is screaming in my ear. The next, I'm turning it up, because he was whispering and I could barely hear it. Volume would go up and down even when he was speaking normally. Voice acting was very good, I appreciated the voice of each character.

One of my all-time favorite books!

Gaston Leroux's "The Phantom of the Opera" is one of my all-time favorite novels, seamlessly blending mystery, romance, horror, and suspense, so five stars for the story itself.

As to the performance, Keith Wickham is the best narrator of all the "Phantom" audiobooks available on Audible at present. He gives an energetic, emotive reading, which perfectly suits the breathless pace of the story, and carefully avoids either overacting or lapsing into monotone, as many other narrators do. He does an excellent job of creating unique voices and accents for each character, though I didn't care for those of the Persian and the Phantom/Erik, which is too bad, as a good portion of the story, particularly towards the end, is told in their voices. The Persian sounded more Hungarian or Russian than Middle Eastern to my ear, and the Phantom/Erik's gruff, growly baritone (which sounded like a combination of Claude Rains and Sydney Greenstreet) was at odds with the playful nature and angelic voice described by Leroux. I also found some of Wickham's pronunciations a bit annoying, such as rushing through "Daae" so that sounded like "Day."

While enjoyed this audiobook, I wouldn't call it the definitive interpretation, and would love to see someone like Dan Stevens try their hand at bringing this story to life.

The narrator was fantastic as usual, very creative and consistent. The story, which I expected to be far more arduous, was both humorous and heart-wrenching