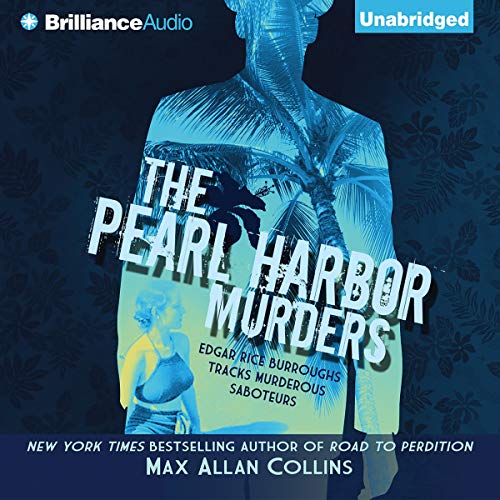 Two nights before the devastating military strike on Pearl Harbor, a young half-Japanese singer is found dead on a Honolulu beach. The murder appears to be a simple crime of passion, but writer Edgar Rice Burroughs - creator of Tarzan and John Carter - has his doubts.

The writer’s suspicions lead him and his son Hully to conduct a sub-rosa investigation into the sultry singer’s death. Their pursuit of the killer coincides with growing rumors of an imminent Japanese attack against the Pacific fleet stationed in Oahu. Was the victim - who had links to both military officers and suspected spies - harboring a key piece of intelligence? With the clock ticking toward infamy, the intrepid father-son team races to crack the case in this compelling historical thriller.

What listeners say about The Pearl Harbor Murders

Good but not as good as some others

This is a solid historical fiction murder mystery by Max Allan Collins. It's not as good as a couple others in the series (London Blitz Murder, Murder on the Titanic) but it is quite decent. Those who are fans of the battle at Pearl Harbor or Edgar Rice Burroughs (who was living in Hawaii at the time) will especially enjoy it. It's very enjoyable, the writing is decent, but it lacks some of the superb writing Collins delivers in other books.

Wonderful historical research and accuracy, as usual. Interesting plot twists set in the days just before and during Dec 7, 1941, in Hawaii.

Enjoyed the mystery and intrigue in the story and even the history mixed in. However, near the end there was a section or two with lots of historical details that bogged down the story aspect. History buffs would love it and I do feel it's important to the telling of Pearl Harbor, but I'm just not one to want to sit and read a history book. The narrator did well differentiating the characters. On the whole, I enjoyed his telling of the tale.

Could have been better!!!

The narrator did good voices. Each character was different so that was pleasant so u could tell each character apart. However when he wasnt doing a voice his voice was almost hypnotic.
I found this book really hard to concentrate on.
The actual story of police work was pretty good, but the description was so intense that it took on a life of its own. The description went so deep that it basically took u out of the story.