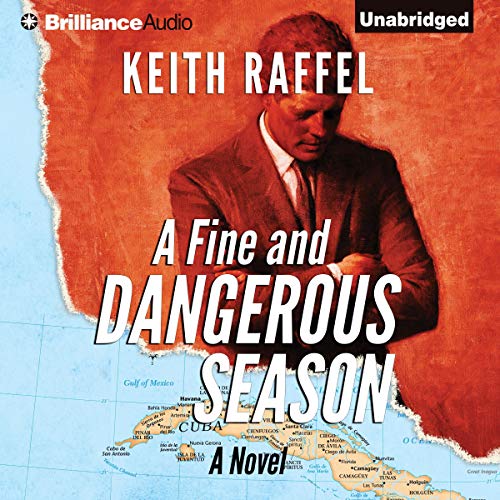 A Fine and Dangerous Season

By: Keith Raffel
Narrated by: Luke Daniels
Try for £0.00

The phone rings in the California home of businessman Nate Michaels before the sun is up on October 24, 1962. An hour later he's on an Air Force jet to Washington. Michaels hasn't seen or spoken to President Kennedy since they met at Stanford in the fall of 1940, but now JFK needs his help to defuse the threat posed by Soviet missiles in Cuba. In both the Pentagon and the Kremlin, pro-war generals want a showdown, not a humiliating compromise. As the world races toward nuclear holocaust during a fine and dangerous autumn, Michaels finds himself spinning in a maelstrom of statecraft, espionage, love, and betrayal.

What listeners say about A Fine and Dangerous Season

The story kept my interest. I listened while walking for exercise and it was great encouragement for me to keep walking since I wanted to know what happened next. Luke Daniels is an awesome narrator. He's good with accents and changing his voice so it's easy to know which character is speaking. He also speaks clearly so he's easy to understand. I'm not exactly sure what I expected as far as the story goes. Perhaps I was afraid it would be boring. But it turned out to be an intriguing audio book which I'm glad I listened to.

Narrator is quite talented but ties himself in knots to produce familar characters from the past. Sublimental story is more interesting than main action. Interesting use of historical data without pointing out heros or villians.

For lovers of historical fiction

Good story, intriguing even though we know how it ends. Well read. Fiction and history woven well together.