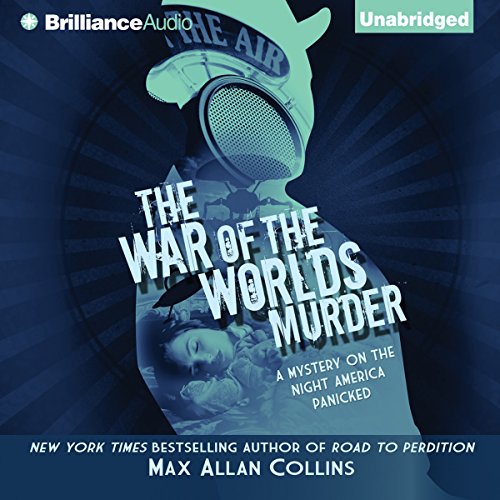 The War of the Worlds Murder

The War of the Worlds Murder

On October 30, 1938, rising radio star Orson Welles boondoggles the American public into believing that Martians have attacked Earth. With his clever adaptation of The War of the Worlds, the great showman proves he can get away with anything - maybe even murder.

Minutes before the fictitious invasion goes live on the air, a dead body is found in the studio and the polarizing Welles is the obvious suspect. Convinced that the star has been framed, Walter Gibson - creator of pulp superhero the Shadow - has exactly one hour, the length of the radio show, to solve the murder. But in show business, appearances are deceptive, and the facts of this case are not what they seem.

The sixth in the series of Max Allan Collins’s disaster thrillers, The War of the Worlds Murder offers up historical high jinks of Welles-ian proportions.

Experiencing the real circumstances and factual events that occurred when the iconic “War of the Worlds” piece presented by the Orson Wells’ Mercury Theatre hit the airways in 1938... is priceless. Having such an extraordinary front row seat to this astounding event is amazing. And... being presented this astonishing piece of history through the Max Allan Collins style ...is just brilliant!

We loved every minute of this story. The murder, the players, the timeframe in the 20th century, and the “War of the Worlds” event. Wow!

War of the Worlds

Only Max Allan Collins could have written this great book. If you love Orson Welles, you will love this mystery that takes place on the night of the famous Mercry Theatre on the Air broadcast. This is my favorite of Max’s Disaster Mystery Series. If you like the Shadow and old time radio it’s sure to be yours too. Dan John Miller does a great job as always.

This is really a love letter from Max Allan Collins to Orson Welles and his crew of actors, writers, producers who put on the infamous "War of the Worlds" radio show in 1938. It's dressed up in a bit of a shaggy dog story, but its still fun. It's not the best of this series, but for those interested in pulp writers and radio, it's wonderfully engaging.

Hoax within a hoax

Meticulous historical research as always. But this is the worst of the series. It is a hoax within a hoax and the worst hoax is on the reader. The only thing you feel after reading it is - why did I waste my time with this thing. Very disappointing.

I have thoroughly enjoyed all of this series but this one is the best. I love that the author changes his style to match that of the featured author that is the protagonist. And the narration has been excellent throughout. But this narrator truly became the characters. I kept forgetting that Orson Welles and John Houseman are deceased and couldn't be actually participating. I'm really going to be sad when I finish the series and have no more to enjoy.

It was free and I still feel tempted to return it

The entire story was disorganized and did not meet the expectations given by the title.

This story could have been organized with a clear point and clear characters. It had the promise, just no follow through.

Was The War of the Worlds Murder worth the listening time?

Probably not. I've been forcing myself to let it play through.

I love the Max Alan Collins Disaster series. This one is really good but just a bit different than the others. I will now have to listen to the actual broadcast of Orson Welles.

Ran Out Of Heller Books Soooo...

I would highly recommend that before you read or listen to this that you first pick up the MP3 or Audible file of the actual radio broadcast of Orson Welles and the Mercury Theater from 1938. The two together are great fun.