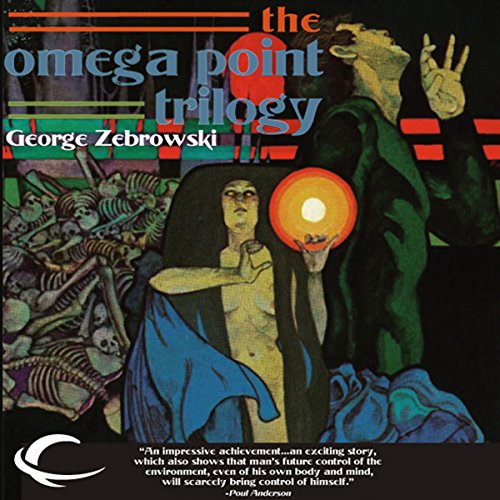 6599 A.D.: The war between the Earth Federation and the Herculean Empire had been over for more than three centuries. The planet in the Hercules Globular Cluster was a cinder; the few descendents of the surviving Herculeans lived on Myraa's World, half a galaxy away, in what seemed to be a religious commune. But on an unnamed planet, deep within the Hercules Cluster, two survivors, father and son, gather their resources and plan to enforce a reign of terror over the Federation worlds. But the woman Myraa has a different vision - one which excludes empires and warring armies. Subtly, she strives to shape events toward a different end.

Rising to one of the most unusual climaxes in recent fantastic literature, this novel of chase and vengeance depicts a colorful, poetic future which is struggling to overcome its past. Filled with striking twists and vivid ideas, this is space opera at its most modern.

What listeners say about The Omega Point Trilogy

I had forgotten how bad this is

What character would you cut from The Omega Point Trilogy?

Can't think of many I'd keep.

I generally try to avoid bad reviews, except in those cases where it's SO bad I wish someone had warned me off.

This is one of those times.

The book only really has one interesting plot-related idea, that the Terrans would really rather capture and rehabilitate the terrorist main character, rather than kill him. Of course, this horribly backfires through a series of increasingly weird and arbitrary deus ex machina moments.

There's some interesting tech ideas, which I remembered, any which continue to be somewhat nifty. The story, though, is a waste of time, and the cool stuff isn't enough to make it worth it.

George Zebrowski should have been a poet. That is his true calling in my view.

In a really long novel though, his megalomania really shows up. The story is about a twit who survived the fall of his humanoid race. The twit then goes in a rampant murder spree against civilians of the opposing race, i.e. behaves like a terrorist. And he behaves in a delusional way with no real self reflection to realise he's been wrong. He just keeps going on despite his friends and foes alike trying to help him stop his own self destruction and his wanton maasacres.

That above passage pretty much covers what happens in the first part of the book. George Zebrowski however drags it out right into the second part.

Somewhere in the middle of part 2, I gave up. I couldn't listen to rantings of a self obessed terrorist repeating what he said earlier. Never mind that the reviews talked about "building towards an innovative end". The reality is that George Zebrowski indulged in wordiness and high level concepts at the EXPENSE of the listener. These additional words served no other purpose than to feed George's ego in his superior writing skills. So, this review is based on listening to almost two third of the book.

In summary, as a listener, I found this novel to be a waste. Perhaps other people can be more patient than I and listen the whole way through. I on the other hand was quite bored and want a refund for my credit!