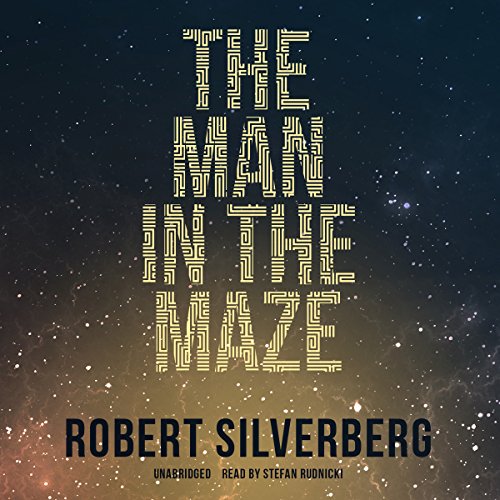 The Man in the Maze

By: Robert Silverberg
Narrated by: Stefan Rudnicki
Try for £0.00

Once a hero, now a pariah, Richard Muller is humanity's last hope.

Richard Muller was an honorable diplomat who braved unimaginable dangers to make contact with the first-known race of intelligent aliens. But those aliens left a mark on him: a psychic wound that emanates a telepathic miasma that his fellow humans can neither cure nor endure. Muller is exiled to the remote planet of Lemnos, where he is left, deeply embittered, at the heart of a deadly maze - until a new alien race appears, seemingly intent on exterminating humanity. Only Muller can communicate with them, due to the very condition that has made him an outcast. But will Muller stick his neck out for the people who so callously rejected him?

What listeners say about The Man in the Maze

well this book shows it's a age bit. It's more of a contemplative piece than an action one. Not a lot happens it's kind of boring. The narration is fine if a little bit dry. The material is dated and if you are a woman who likes science fiction you will be used to the high level of misogyny present here. Females are not in the story unless they are sexual partners and their nudity is described in detail. They have no personality and all they want to do is be pleasing sexually and be looked at. So, there you have it. Read at your own risk.

Good story except for the author's 2 dimensional women characters. Guess women in this future have nothing better to do than swim naked and wait for their space man?

A must read for anyone that doesn’t understand that the male patriarchy is a real thing?

Also hilarious to think this book was “woke” at the time with its view on Columbus.

But this book treats females as “the people males have sex with.” It is shocking and eye opening to see a woman’s place reduced to the things males do when they aren’t working.

The must read moment comes when the protagonist assures himself the sexual partner he is with is young. She maybe 20 or 90. With the medical treatments of his world it is impossible for him to know. But he’s pretty sure she’s 20 actually! Because, you know. How much that matters.

I thought the other reviews might be exaggerated, but women really are relegated to pleasure objects. Characters are also two-dimensional and not especially intriguing.

That said, the story itself is exciting, if not occasionally confusing. The book also seems to end without a satisfying resolution.

I would still recommend the listen if the description caught your attention.

I thoroughly enjoyed this book. It was well thought out and and it didn't waste any time. To the people that are saying this book is sexist.....come on, don't be so sensitive. This book IS NOT sextist. Just because the female characters in this book aren't as developed as main characters (which happen to be male) does not make it sextist. it's a short book, give it a break. I think people need to relax a little and enjoy the story.

I love classic sci-fi and especially Robert Silverberg. It's a good book, not the best thing in the world, but it's short, has a decent plot, and has some interesting philosophy to think about, what else do you want?

I'm half way through this book and the story is interesting but I am really put off by this book's really terrible treatment of women. Another reviewer described the female characters in this book as 2 dimensional and I think that is generous. There have been no significant female characters. The female characters that are there are only there for sex or spouses. They have no personality. I had to go back and see when this was published. I thought I had stumbled on something really old but this was released in 2017. I get that the main characters is supposed to be an asshole and that can work in a book sometimes, but this isn't just the antagonist's point of view.

The story itself is interesting as far as I've gotten. The first man to make contact with an alien race has banished himself after the experience left him impossible to be around. But a new alien species has a arrived and a starship has been sent to bring the man back for his unique perspective on understanding alien minds.

I can't recommend this to anyone.

And dated. If it wasn’t free I might just be annoyed. As it is, it provided background for doing a closet clean out. Hoped ending might make it worth it. Sadly I was wrong.

What a fun read, really enjoyed this story! It is certainly a good read for any scifi lover :)