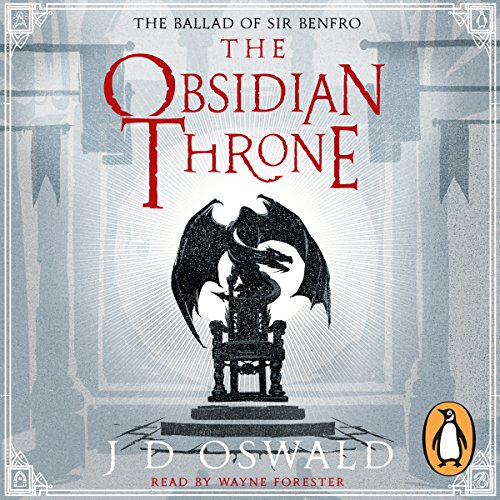 The Obsidian Throne is J.D. Oswald's stunning conclusion to 'The Ballad of Sir Benfro' series.

There is no war in the northlands, just annihilation. Either the dragons will destroy this world or Queen Beulah will raze it to the ground.

Below the city is a secret the House of Balwen have kept for millennia, a treasure beyond imagination. None but a direct descendant of Balwen himself can open the escape routes from this cavern. To do so, Princess Iolwen will need to claim the Obsidian Throne.

Meanwhile, Errol and Sir Benfro find their destinies drawing closer together, with the future of all life in the Twin Kingdoms resting on these two unlikely heroes. There will be self-sacrifice and terrible betrayals. And the lives of boy and dragon will be forever changed.

J. D. Oswald is the author of the epic fantasy series, The Ballad of Sir Benfro, which includes Dreamwalker, The Rose Cord, The Golden Cage, The Broken World and The Obsidian Throne. He is also the author of the Inspector McLean series. James runs a 350-acre farm in north-east Fife.

What listeners say about The Obsidian Throne

1. Tears
2. I kinda hate Klun!?
3. Best audiobook I've listened to by far. Definitely worth it, well written, perfectly narrated. Loved it from start to finish.

Well ďrawn characters, a strong storyline, a superb balance of myth and legend with romance, sorrow, anger, revenge and camaraderie all mixed in proportion. I loved every minute. This book was made perfect by the talent of the reader, every single character's voice instantly recognisable.

Rushed to the finish

This final book to a series with a decent start is a disservice to the people who saw it through to the end. It felt more like Oswald was just lost interest and tossed everything in a last book so he could finish and let the series die. Unfortunately he didn’t pull the plug so much as murder it, cut up the body, and buried in a shallow grave. It was just a very dissatisfying conclusion to an ok series. I won’t be looking for any more books by this author.

rush ending to a so so series

books 2-4 were okay but it left huge holes, this book was a poor attempt to close down the series as quickly as possible. wish I hadn't started the series at all