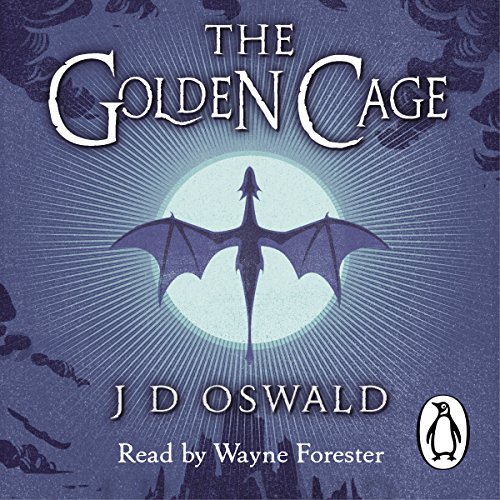 Penguin presents the unabridged, downloadable, audiobook edition of The Ballad of Sir Benfro: The Golden Cage, the third installment in the new fantasy series from JD Oswald, read by Wayne Forester.

Queen Beulah is determined to have her war, despatching Inquisitor Melyn north into the land of her enemies.

Battling the ever-growing influence of Magog, Benfro struggles to resist the treacherous orders of the long-dead Dragon Mage, a task made yet more difficult by the arrival of Errol in his forest refuge.

His body broken, Errol is tormented by dreams of his beloved Martha, imprisoned in a Golden Cage. He has escaped from King Ballah's torture chamber but remains powerless to help her.

Yet fate has united these two. Apart, they will surely perish, and all Gwlad with them.

What listeners say about The Golden Cage

felt like not much happened in this book and I found my attention straying quite alot, I'm invested in the characters now though due to the previous books so will continue with the series

A better storyline. The offered plot was meandering and unfulfilling. Indeed, it felt like the author was deliberately shoving in poor quality material just to eek out another cheque from the publishers for subsequent instalments.

I have already bought the next book in what I thought was a four book series only to find out that the next book isn't even the last one...please! I really don't think I'll bother.

I read this only a short time ago and can barely remember a thing about it - not a good sign.

What character would you cut from The Golden Cage?

If I were editor I'd have flung this back at Wayne Forester with MOST of the book cut, never mind the characters.

I wish I could go back to warn myself before buying the first one. Sadly disappointed with author and publisher.

I have enjoyed the three books so far. I find the speaker is very engaging and enjoy his range of voices. So many for one person... Lovely engaging voice.
At times it is a little slow and at other times I quite like the slowness and gentle story telling.
The characters do develop and grow. at times I get a sense of predicting the future is flagged but then other things pop into the book and move the story in a different direction.
I just checked on when the next in the series is out and it is later this month so not long too wait.

When is the next instalment

Cannot wait to listen to the next chapters. Excellent narration brings the characters and story to life

Where does The Golden Cage rank among all the audiobooks you’ve listened to so far?

One of the best series.

What other book might you compare The Golden Cage to, and why?

I just enjoyed the whole concept.

I loved all the different dragon personalities, and the way they were woven in with the human characters..

Cannot wait for the next book, please hurry up and produce it as soon as it is written.

Beware if you read this trilogy!

What disappointed you about The Golden Cage?

If you think the story will come to an end in this last volume of the trilogy, you will be disappointed.

What was most disappointing about J.D. Oswald’s story?

This last book was very long-winded as if the writer wanted to write a thick book but had not enough story to fill with. So the story was too stretched out and there was a lot of fill-up in my opinion. And the story became more and more far-fetched.

What does Wayne Forester bring to the story that you wouldn’t experience if you had only read the book?

I cannot know that of course but it was well read, that I enjoyed very much.

I would not recommend the last volume of the trilogy and maybe not even part two. Part one was nice.

In this Book there is not a lot of development in the main characters. They change locations slightly but not their abilities or who personalities.

Would you be willing to try another book from J.D. Oswald? Why or why not?

Yes but but I would hope for more of a story next time.

Did The Golden Cage inspire you to do anything?

No, unless you consider running from one disaster to another inspiring.

The entire series kept me entranced. I loved it. The narration is storytelling at its best.

I'm routing for Beulah and Klum

I frankly don't care about the Dragon's anymore and I don't think Oswald does either. Beulah and Klum are uniting a Kingdom with ease. It's actually great to hear it happen. And Klum is truly turning into an amazing leader, while Beulah has apparently found a heart!

I just don't care about a boy and a Dragon who's chief concern is defeating an already defeated dragon since Dragon's can't apparently die in this world! The way I see it, if Errol should just kill Benfro then all the problems in Gwlad would be solved. He could go and live in peace anywhere he wanted, and Magog couldn't get another body.

Then there's all this stuff about Benfro and Errol getting caught, it's pretty sad what they've become but I don't care. Long Live Beulah.

Narration is the same as the previous books. No better, no worse.

I keep waiting for awesome..and waiting and..

Its almost good and then we digress and the protagonists make another goofy move...you can even see where its headed. And why do the antagonists have it so easy? Like no one knows this stuff and suddenly or then they get help from...really? I just got annoyed after a while. More so because there is such potential for a great story. This is my last of this series unless I hit the "need a book bad wall" again.