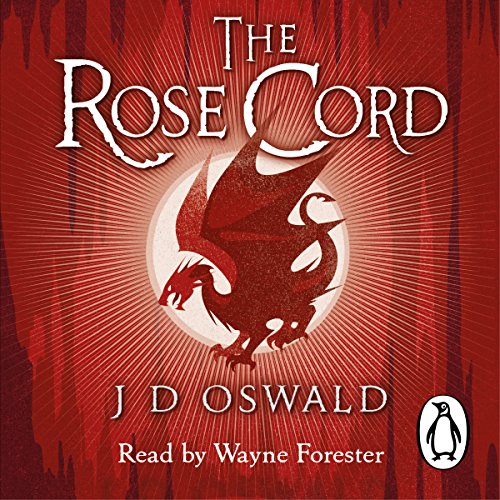 Penguin presents the unabridged, downloadable, audiobook edition of The Ballad of Sir Benfro: The Rose Cord, the second installment in the new fantasy series from JD Oswald, read by Wayne Forester.

Fleeing the vengeful Inquisitor Melyn, Sir Benfro is drawn to the last resting place of a great dragon of legend, Magog. Through Magog's spirit, Benfro discovers the true nature of his forebears. But with this knowledge comes terrible danger.

Errol Ramsbottom's dreams of becoming a great Warrior Priest are shattered when he discovers the dark secret of the Holy Order's power. But as a chosen novitiate he is trapped, unwillingly drawn deeper into the sinister plans for war which will engulf Gwlad.

With the forces of magic gathering so the destinies of Errol and Sir Benfro further entwine.

What listeners say about The Rose Cord

Definitely a book for lovers of fantasy, dragons and magical tales, if a little pedantic!

A bit more than book 1

Book 2 was a better overall story than the first, but for some reason we keep going back to the Dragon that has his name on the book. He's just the worst character in the series. And it's a little hard to follow/understand what's happening between him and Magog.

Errol's story is much better though and he seems to be filling into his role rather well, if not a little hesitantly. He's definitely not the BA we were hoping for at the start of this book, but still a good character. But Errol meeting up with all of his unbeknownst family throughout this book is fun and entertaining. And his powers are growing. The BA is apparently going to be Klum; which is okay too since he seems to be the best overall man in the entire world of Gwlad.

And again, I come to the point where I'm actually following Queen Beulah more than anybody else, she's a "W(b)itch" at heart, but then we see the side of her where she actually starts to care about something other than herself for once. She's by far the best character in the series and I'm very interested to see where she ends up.

So to conclude: Benfro shouldn't be the main character of this book, Errol is showing great promise, Klum appears to be a BA, Melyn is a worm, and Beulah is the one I'm routing for. I'd waste a credit/money on this book.

Oh, and again, the narration is just okay. Better than the first, but nothing that makes you want more.

Would you try another book from J.D. Oswald and/or Wayne Forester?

Well I am stuck now, so other readers be prepared. For those of you who thought this was a trilogy, guess what? The author seems to think it needs to go on, and on, and on. If I had known that it is going to be another endless Game of Thrones want-to-be, I probably would have waited until the whole series was completed before I purchased it.

The 3 works have many repetitive details. If those repetitions were removed and the author concentrated on those issues germane to moving the story along, and closure, then it would probably have been very nice trilogy. As is, who knows when it will end?

What does Wayne Forester bring to the story that you wouldn’t experience if you just read the book?

This book starts off were the last one ended, and introduces more problems to the mix. I am interested to see were Oswald is going to go with this series.
I prefer the audio book to the ebook, because of the narrator. Who manages to bring the characters to life.
I can't wait to start the third book.

This book took my imagination to places I never knew it could. Using the Earth's Ley lines as a way of channeling magic made perfect sense. I Absolutely love this book