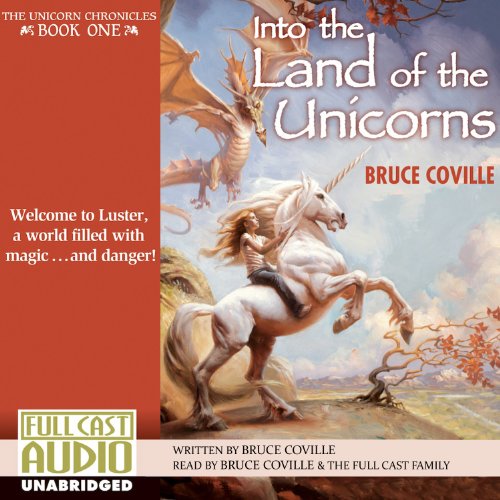 Into the Land of the Unicorns

Fantasy and mystery combine when Cara is forced to flee Earth, clutching her grandmother's amulet and carrying a message for the unicorn queen. The dramatic production helps the listener distinguish the many fantastic characters inhabiting the land of the unicorns. Particularly good performances are given by Mimi Holbert, who nicely captures the amusing, squirrel-like Squijum, and Kate Huddleston, who elegantly portrays the dragon, Firethroat. Children who enjoy fantasy and the many young girls who clamor for unicorn stories may appreciate this first installment of the Unicorn Chronicles.

On a snowy night, Cara and her grandmother are pursued into St. Christopher's church by an unknown man. Clutching her grandmother's mysterious amulet, and following the old woman's instructions, Cara escapes their pursuer and falls into Luster, the world of the unicorns. Attacked by a monstrous little creature called a "delver," Cara is rescued by a shambling, manlike beast known only as "the Dimblethum".

Soon Cara has also met a rebellious young unicorn named Lightfoot, and a ridiculous little creature called "the Squijum." With their help, Cara embarks on a journey across Luster to deliver a message from her grandmother to the queen of the unicorns. But to survive the trip, Cara must come face to face with her greatest hope, and her greatest fear.

What listeners say about Into the Land of the Unicorns

If you could sum up Into the Land of the Unicorns in three words, what would they be?

I like the squidgem (I'm pretty sure I spelled that wrong, but since I don't have the book in front of me, I had to guess). :)

What does Bruce Coville bring to the story that you wouldn’t experience if you just read the book?

The voices of each person. I love the full cast recording. Made me really feel like I was there, in the story.

No; but it was a delight to listen to.

I've read the books long before I listened to this incredible performance. I believe that this series should be adapted for a 4 season cartoon with "Avatar, the Last Airbender" level of quality and storyboarding. But I digress... You all did an amazing job and hope to hear more down the road. Thank you.

A fun little MG Fantasy with some very nice details.

BOOK DETAILS:
Into the Land of the Unicorns by Bruce Coville, read and published by Full Cast Audio (2009) / Length: 3 hrs 37 min

SERIES INFO:
This is Book #1 of 4 in "The Unicorn Chronicles," all four are available on audio.

SUMMARY:
Many of the elements of this story are straight out of the fantasy playbook, but Bruce Coville's style of writing almost always manages to suck me in and keep my attention. This book is definitely more on the plot driven side, rather than my preferred character driven tales; yet the glimpses we get into what is going on with the characters is intriguing.

CHARACTERS:
Cara: In such a short book, we don't get a lot of character development for her but it was enough. She is loyal, brave & compassionate, but not unbelievably so. Note: She always wanted to live in a library, which is an excellent life goal.

We don't learn a lot about anybody besides her, but my favorite side character so far is Thomas (the Tinker and philsopher).

WORLDBUILDING:
The world seems to be a standard fantasy setting (forests & caves, unicorns, dwarves called Delvers, dragons, etc), but also includes a couple of unique creature people who aren't fully explained in this volume. There are good descriptions of the colors, sights, sounds, and smells of the world. The history of the unicorns & hunters is quite interesting.

PLOT:
The book starts right in with a couple of action scenes that do a good job of setting up the mystery & danger Cara will be dealing with. We then meet the main individuals who will be going on our quest. The book is very short, but doesn't feel under developed. It moves along at a good pace with a mix of action and talk. There is an ending to this quest, but the overall plots regarding Cara's family and the danger to the unicorns remains open.

HIGHLIGHTS / CAUTIONS:
--The home & library of the Keeper of the Chronicles - Just like Cara, I want to live there.
--Thomas' cart/wagon
--Cara's interactions with the dragon

CAUTIONS: Cara believes that her parents abandoned her and suffers a great deal of emotional trauma as a result.

NARRATION:
Full Cast Audio uses different actors for all the main roles, and casts actual children as the younger characters. I am particularly fond of Bruce Coville's voice, and he is very good at emoting. In this one, he serves as the narrator. I also especially liked the voice of the dragon. I did NOT like the voice of the Squijum though, and am very grateful that it didn't appear much. I am also not very fond of music in my audiobooks, although it wasn't as bad in this one as some others. I did have to bump it up to 1.5 speed (rather than my usual 1.25) since it was a bit slow.

loved this book as a kid.

I think this is a good book for transitioning from children's books to young adult books.

A story from my childhood....

The first book is the hook, i immediately wanted more. I’m so glad there’s 3 more books!!! His writing style is simple and expressive with imagination at its finest.

My Favorite Book Ever

I've loved this book since I was a kid and now i get to share with my kids.

I was ecstatic at finding a dramatized version of this book, and to discover the rest of the series available too. the cast performed wonderfully.

The Love of Unicorns

I first read this book many years ago with my daughter when see was in 4th or 5th grade we both fell in love with it. Then one lucky day Bruce Colville was at our local library so I took my daughter and my 4 year old granddaughter to see him he was more wonderful in person than in the book. He told us a story and sign a half dozen of his books for us. Over the years I have bought. each of my grandchildren this book and the whole series of course and now I'm buying them on audible to re-live the days of Luster. Thankyou Bruce and all who have contributed along the way.

This series is my childhood. listening to it with a full cast is an absolute delight and blessing.

This has been one of my favorite books for decades

This series grew up with me. Great for aspiring youth readers since the format, plot, and language advances with the series. The first book is still a great standalone for younger readers which isn't true of many series. But the plot is still equally engaging for adults from the start.