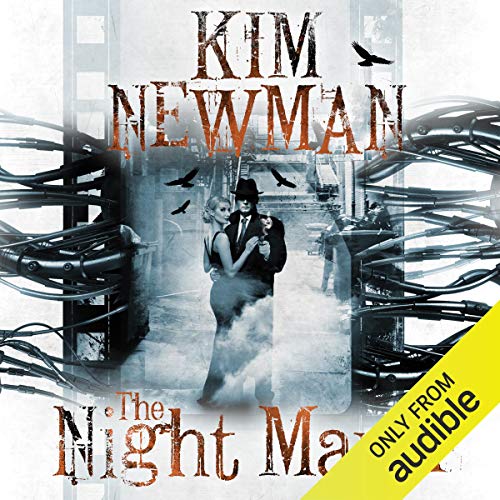 By: Kim Newman
Narrated by: Mark Meadows
Try for £0.00

Welcome to the City made from a dream. But this isn't any dream; it is the dark and haunting nightmare of a killer.

It is the near future, and old-fashioned movies, or flatties, have been replaced by Dreams, virtual reality scenarios written by professional Dreamers. When infamous criminal Truro Daine escapes imprisonment, he flees into the City, an artificial world of his own creation, where he rules as the all-powerful Night Mayor.

Now, detective Dreamer Tom Tunney and Susan Bishopric, author of romance Dreams, must join forces to track him down. But how do you hunt the Night Mayor in a city populated by a dense crowd of strangely familiar characters, where it's always 2.30 a.m., shots never kill and the creator is omnipresent in every drop of falling rain...?

Kim Newman is a well-known and respected author and movie critic. He writes regularly for Empire Magazine and contributes to The Guardian, The Times, Time Out and others. He makes frequent appearances on radio and TV. He has won the Bram Stoker, International Horror Guild, British Fantasy and British Science Fiction Awards and been nominated for the Hugo and World Fantasy Awards.

What listeners say about The Night Mayor

The (very) near future and in a virtual world based on 1940s film noir, a criminal mastermind Truro Diane sees everyone and rules everything. Desperate to break his hold on the city, PI Tom Tunney decides to take him down. Meanwhile, in the real world, professional dreamer - a person who creates the virtual worlds other people experience as characters in their story, - Susan Bishopric is assigned to team up with Tunney and break Diane's corrupting influence from the system.
Night Mayor is a great book, - and a thoroughly enjoyable listen. The narrator puts an impressive effort into capturing the sense of characters inspired by famous films from decades ago and if you're familiar with the films of the 40s you'll spot plenty of references. Even if you're not, you'll still be able to enjoy this well-written cyberpunk thriller from one of my very favourite authors.