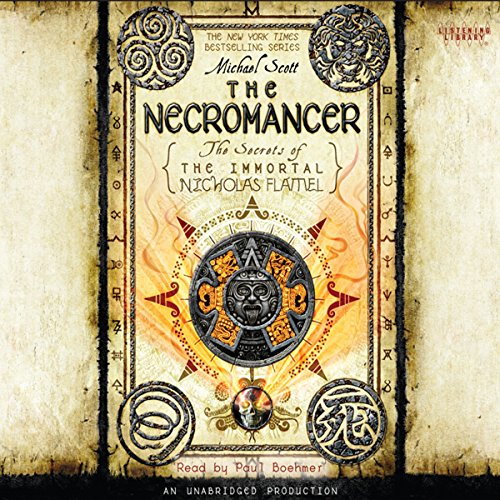 By: Michael Scott
Narrated by: Paul Boehmer
Try for £0.00

Nicholas Flamel appeared in J.K. Rowling’s Harry Potter - but did you know he really lived? And his secrets aren't safe! Discover the truth in book four of the New York Times best-selling series the Secrets of the Immortal Nicholas Flamel.

The belief: Sophie and Josh are the twins of prophecy. The reality: Nicholas Flamel has been wrong before.

Sophie and Josh Newman are finally home, but they're both more confused than ever about their futures.

Neither of them has mastered the elemental magics they'll need to protect themselves from the Dark Elders, they've lost Scatty, Macchiavelli is coming to unleash on their city the menagerie of monsters imprisoned in Alcatraz, and they're still being pursued by Dr. John Dee. And most disturbing of all is that now they must ask themselves, can they trust Nicholas Flamel?

Worse, can they trust anyone?

Listen to the whole series!

“The Secrets of the Immortal Nicholas Flamel has everything you loved about Harry Potter, including magic, mystery, and a constant battle of good versus evil.” (Bustle)

What listeners say about The Necromancer

This audiobook is my favourite by far. It’s gripping, it’s exciting and it’s fun. I would recommend it to anyone

Enthralling as usual and didn't even realise this book was at the end. looking g forward to the next book.

This novel intensifies your feeling for the characters. By the end of this book you have so much invested in the story that you want to know the end; but are starting to mourn that there are only two more novels. This is the 2/3 point in the series. Be prepared for heartbreak and surprise – who is who. The strands of the base story complicate in this installment leaving you unsure of what twists and turns lay ahead -- excellent. There are storms brewing on every front, elder and immortals and on the side of good and the side of evil. You’ll have some big questions at the end of this one for sure.

Josh Newman's insecurity is utterly annoying. I find myself loving the story less and less because of this character.

I actually enjoy this series(despite the narrator who everyone rags on). It is an enjoyable listen, but it is necessary to note that the plot is a bit predictable at some points and ridiculous at others. It isn't that the twins shouldn't show mistrust of the flamel's, it's just that the level of distrust seems overly dramatized, and needlessly heightened to no foreseeable resolution. Anywho, there I leave you with a brief two cents

on to book five!

this series is so good, have had the books for years , love the audio version, tale as old as time !

The story was very good but the performance needs work. You can hear the narrator licking his lips and his lips smacking!

The Best One So Far!

I loved this book! I was sad when it ended and cannot wait for the next in the series. This series just keeps getting better and better. Love it!

This is a really good continuation of the story

This book is a really good continuation of the story and is a must read by anybody that is into the michael scott books about the immortal nicholas flamel.

This series may or may not be intended for teenagers or the youth. It is a nice fun series. I am a seriously avid reader, and finish a novel per week. I picked up the first book in the series for my daughter. I ran out of books and picked it up. I have read all of them now. They are fun.
The series has characters that are well wrritten and believable. The goals and problems are very truthful. Michael Scott has to have or had a few teenagers because he has them down pretty well in the books.
Now don't think you are about to read a literary masterpiece but the stories have heart, soul, well planned themes and flow, and realistic well described characters. I love a good book and these are just that. GOOD BOOKS

one of the best installments

Sophie shines here even though this book delves into Josh's growth.

while he is obnoxious his suspicious nature adds a good foil to other characters .
Perenelle and Nicholas are like an aunt and uncle filled with secrets and wonders.
Dr. Dee is one heck of a mastermind and the supporting cast of mythological beings and historic figures is amazing.

This series is atrocious

I kept waiting for this series to get better but it is just trash. The main characters are not likable in any way and are just stupid. The story never progresses... not through 4 books, nothing of significance has happened. These books are just novelty riding on the fame from Harry Potter using a name. The writing is atrocious and the narration is bad. Don’t waste your time with this awful series.