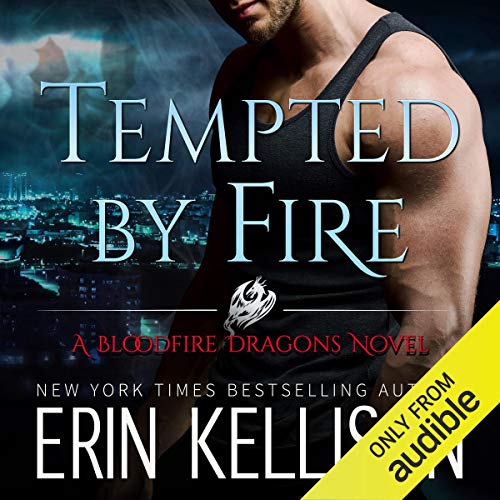 Tempted by Fire is the first in the enthralling new Dragons of Bloodfire series by New York Times best-selling author Erin Kellison. Dragon shifter Thane Ealdian has waited 600 years to avenge the loss of his family, and finally a clue has surfaced that implicates an old adversary. Thane will stop at nothing to seek his revenge, but to prevent violence between the clans, the Bloodkin Triad has forced a mediator on him. Some upstart named Emerson Clark.

Emerson is fed up with all Bloodkin and how they've managed to control every aspect of her life. While she doesn't believe that Bloodkin can shift into dragons - because, really? - she has to admit, they are exceptionally nice to look at. But once the mediation is over, she wants nothing to do with them ever again. When Thane discovers that the clever and beautiful Emerson is the key to uncovering the truth, he has no intention of letting her go. Although she wants to run, she can't turn her back on Thane or her intense feelings for him. His quest pulls at her heart, just as his nearness sparks something dangerous inside her. With evil in hot pursuit, sooner or later everything will ignite - the mediation, the shifter within her, and their passions.

An "OK" Plot But No Chemistry!

This story was a hard one for me to rate. I've read other stories by Erin Kellison and really enjoyed them; however, I felt a little let down by Tempted By Fire. The plot, suspense and mystery was decent, and the humorous dialogue throughout the story was really good, but the characters lacked chemistry and romance. Overall, this was just an OK listen to me. Had I not bought this on a whispersync sale, I would have probably returned it.

Bernard Setaro Clark was good fit for Thane Ealdian, and did a great job narrating.

If you're looking for a steamy romance, then this story may not be for you; however, if you are looking for a dragon shifter story with more of a storyline, then you may want to consider Tempted By Fire.

OK to have something to listen to while driving.

writing is more for teens, language more for adults. very abrupt ending. not sure what I was expecting but this was a bit disappointing.

This was a great story, loved it! I have read a few dragon shifter books in the past and they were all sort of cheesy. This one was not. I really liked the characters Ember/Emerson and Thane. Ember was so full of spunk and wittiness. I love a strong female lead character and she was that. Thane was awesome and his back story was very good.

The chemistry between these two was real and genuine. The sex scene was nicely written. There was a lot of great dialogue through out the entire book. Love lots of dialogue. Ember was pretty funny with her witty sarcasm.

Really enjoyed this story a lot.

As for the narration. I swear this guy sounds like Robert Petkoff to me! What a great narrator! He has such a great voice. The women sound like women and everyone gets their own distinct voice and his reading voice is awesome! He reads with emotion as called for, laughing, yelling, whispering etc. and OMG the voice he used for Thane was really sexy!
If you are a Robert Petkoff fan (and really who is not?) you will live this narration.

I got this book for .99 on amazon and the whispersync audible for 1.99 Great deal!

this was my first read by this author and I loved it. great start to a new series. loved the world she built and the characters. this book was short and sweet enough to get me hooked. narrator did a fantastic job.

Really, really enjoyed the story. Love the powerful voice of the narrator, he really made the story so much enjoyable.

Two dragon's meet while murder and mayhem swirls around them. This is an entertaining book!

This story was interesting from start to finish! Loved the mystery surrounding each character. The importance of loyalty and the saving grace of love was extraordinary!

My wife loved it. I liked it too.

Great book for a road trip with my wife when the kids are at home.

Yes, I love dragons. I especially love dragon shifters and Erin Kellison has created a new paranormal romance world with her Bloodkin dragons. Bernard Setaro Clark has one of those voices that reminds me of hot caramel and melted chocolate poured over ice cream and he just makes Thane, the hero, all the more...dragon. Because...dragons! I like that the narrator is male though Emerson, the heroine, might have a more central part in the story. This book needs the male undertones. I'm looking forward to the rest of Ms. Kellison's books in this series and I'll be watching for other books narrated by Mr. Clark.