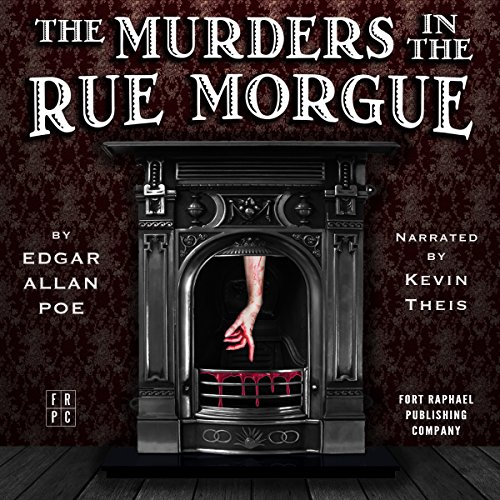 By: Edgar Allan Poe
Narrated by: Kevin Theis
Try for £0.00

Regarded by many as the world's first detective story, Edgar Allan Poe here creates C. Auguste Dupin, the proto-Sherlock Holmes, investigating the murder of two women and arriving at a startling - and horrifying - conclusion.

The Murders in the Rue Morgue was first published in 1841 in Graham's Magazine and is the first of three stories to center around Dupin, who here explains his theory of "ratiocination", where a precise, logical, and unemotional examination of the facts will lead to the solution of a mystery...no matter how bizarre the conclusion.

Poe's Dupin had a profound impact on later writers, and his theory of detection is clearly reflected in Arthur Conan Doyle's Sherlock Holmes series, as well as the works of Agatha Christie.

This edition also features an essay by Poe's contemporary and friend N. P. Willis entitled "The Death of Edgar A. Poe".

As always, Poe writes some strange stuff!! I have read Murders in the Rue Morgue before and had forgotten the plot twist. This version is very different from just reading it. It is almost like a news cast. It actually works out well because it keeps your interest better. The great sound effects also help a great deal. I love the narrators voice as he brings a life to it that is much different than the normal creepy narrators so common to Poe. I wound up listening on 1.5 speed and it really was like I was listening to a radio news broadcast and I really enjoyed it! When the plot twist hits though don’t be surprised when you think “wait, what? Did he just say what I thought he said?”
I would recommend this for people new to Poe or for students that have this for required reading. It is worth a listen! Great job to the narrator!

I will preface this review by informing the reader that I was given a special code for a copy of this book by the narrator in return for a genuine fair and impartial review which I intend to give.

I am something of a casual fan of Edgar Allan Poe but even I had heard of Murders In The Rue Morgue. The story itself is enjoyable with an interesting preface that helps set up the events and helps solidify the claim of the main character to being a precursor of Sherlock Holmes albeit his equivalent to Watson can be occasionally irritating. For other people like me who've heard of Poe from stories like The Raven and The Fall Of The House Of Usher I would recommend not just Murders but specifically this version.

Kevin Theis is a very good narrator for the story in my opinion. He suitably changes both inflection and delivery to differentiate the various characters and their personalities. On top of this his voice is crisp and clear in the recording unlike some recordings already available on Audible. I'm not sure how to phrase this but he also manages to have an accent that seems to match the classical American gentleman tone - somewhat similar to the upper class Englishman of the 19th century.

I must also commend the sound design. The effects and small musical stings help to draw you deeper into the story. In some rare cases it can seem to get a little too loud or too sharp but on balance I would say they also do a good job.

One final comment is to thank Fort Raphael Publishing Company for including the small essay at the beginning. It was a small bonus but one I appreciated especially given the importance of the author in question.

Since it's been years since reading Poe's dark mystery, this was a chance to re-familiarize myself with the storytelling genius of a legend - and a rainy Saturday was the perfect setting. This audiobook version did not disappoint! The first person account of events (from the unnamed narrator in the story) pulls you into that darkened room next to a cozy fire awaiting the next unfolding surprise. There was a brilliance to the cadence, especially when the slightest deceleration brought you to those dramatic plot thickeners. The intended pauses were just long enough to let it dawn on you something good was a-coming. As the mystery's weird twists unraveled and came clear to both the narrator and me (the listener), Dupin's delight in revealing his investigatory methods and closely examined clues are evident in the voice inflection of the audioboook's narrator, and provided me the chance to imagine just such a sequence of events happening in Dupin's retrospective dialogue. The occasional background sounds and music were just enough to add to the atmosphere, without distracting from the great storytelling mood. Excellent choice!

Made me want to start listening to Poe again.. Very true to original source. Great vocal timber. Thank you!!

Kevin Theis is a great narrator!

I hadn't read this story since I was a teen so it was great to hear Mr. Theis bring it to life. Gruesome in its depiction of murder.

A whodunnit that is particularly fun for our times. Narration and the special effects behind it are A+

A lively reading of this classic—maybe the first—detective story. "The Death of Edgar A. Poe,” a eulogy by his friend and literary colleague N. P. Willis, is an interesting and surprisingly touching bonus.

I so enjoyed listening to Poe being read to me. Kevin Theis did such a great job describing and bringing this story to life. Poe's books were written to read to you and Kevin absolutely nailed it. I highly recommend this book.

I could not finish this book because of the narrators voice. Nothing against him just couldn't handle the high pitch of his voice.

This audio book starts with a newspaper article from the time which chronicled the death of Edgar Allan Poe. This was very interesting and a great way to start.

The story itself is a murder mystery which is solved by observation, reasoning and deductions [a la Sherlock Holmes].

I enjoyed the newspaper article and the story but what fell short, was the narration. It sounds as if the narrator is announcing a sports game and trying to engender excitement as his voice is at 10 the whole time -- there is no modulation, no quiet moments, no build ups, no inflections, nothing, just at 10. It reminded me of the sports announcer from the soccer games who shouts: "GOOOOOOOOOOOOOOOOOOOOOOOOOOOOOOOOOOOOOOOOOOOOOOOOOOOOOAL!!!" but does it for the entire game. The narrator attempted to do accents/character voices but sometimes his accent would disappear -- but given that he was shouting the entire time, it didn't really matter.

Enjoyable narration but book is not for me

I am giving this title an overall 5 stars because of the narration.
This is the first time I have listened/read anything by Edgar Allan Poe and this author is not for me.
It's a quick listen, with the story padded out by an introduction to Poe that I felt was unnecessary.
The narration is enthusiastic and exuberant.