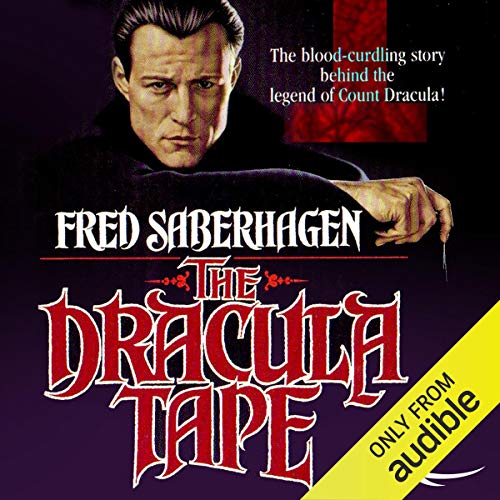 By: Fred Saberhagen
Narrated by: Robin Bloodworth
Try for £0.00

The never-before-told story behind the legend of Count Dracula!

The story of the Count’s greatest love, Mina Harker, and the bloodthirsty vampire hunters whose cruel pursuit drove the master of the night to actions ever more ruthless. The Count Dracula sets the record straight.…

What listeners say about The Dracula Tape

Only recently discovered this. For Dracula fans I can’t recommend it enough. Got very “The Vampire Lestat” vibes from it (though The Dracula Tape was clearly written first) And like TVL Dracula wants to set the record straight after the misinformation about him journaled by the characters from Bram Stokers original novel painted him in a bad light, much like Louis painted Lestat’s character unfavourably in Interview with the Vampire. Very good listen. The narrator embodied Dracula’s aura perfectly from a voice standpoint.

This book is great, I love how Dracula reacts to what the original books human characters say about him and LOVE the readers voice

Would you listen to The Dracula Tape again? Why?

Yes. I have waited a long time for this recording. As this book series is usually told by Dracula dictating his adventures into a tape recorder, audio books are the perfect format for this book series. Also hearing Robin Bloodworth as Dracula, telling his own side of the events of Dracula, is just fun. This entire book series is great, it's highly under-rated. This is my absolute favorite Vampire book series though it is a shame it seems to have fallen into obscurity... until now.

Dracula, naturally. Though he is still vicious, predatory and often obviously lying he manages to become a likable narrator.

He did an excellent job, adding the right inflection to the character.

I loved the whole thing though I did have a few favorite moments. I particularly love the interaction between Dracula and Mina and of course his somewhat flimsy explanations about The Demeter and Lucy. There are parts, that from the delivery alone, nearly had me laughing.

I frekain' love the Fred Saberhagen Dracula books. I do hope Audibles remember that there are more than just three of these books in the series.

The Dracula Tape
The Holmes Dracula File
An old friend of the family
Thorn
Dominion
A Matter of Taste
A question of Time
Seance for a vampire
A Sharpness on the neck
A coldness in the blood.

An Old Friend of the Family and Thorn can also be found in an omnibus called The Vlad Tapes.

I will confess that I first read this book when it was new in 1975, as a teenager. I was delighted to find it here, along with rest of the series, and also afraid that my long-ago impressions would be tainted by my childhood memories. I am delighted to say its as good now, better even, than I remembered.

This was my first Dracula story and remains my favorite to this day. Dracula asks us to consider the Stoker story from his point of view, complete with rambling reminisces, dark humor, his profound disdain of his nemesis, Abraham VanHelsing, and some unlikely and humorous situations he finds himself in while acclimating to the "modern" mid-19th century world (such as passing himself off as a "portable closet" salesman when one of his crates of earth is discovered).

Bloodworth's portrayal is nothing short of amazing, whether as Dracula in present time, in the past with his Transylvania accent, Renfield or VanHelsing, you cannot help but be drawn in to the story. If I didn't know better, I'd say he was the Prince of Darkness himself.

I love the alternative POV of the man himself. I only wish that someone would make a movie of it.

The Dracula Tape is the first of a series of books centered on Count Dracula (yes, that Count Dracula). This book necessarily follows Bram Stoker's book in detail and in it we see the events from Dracula's point of view. And we discover that he and his actions were greatly misunderstood in that story. He deceived his adversaries (he survived) and got the girl In the end. The second book, in which Dracula meets Sherlock Homes, the new revised, fully renovated Dracula is front and center. Saberhagen is a great story teller and in this series he's created the Dracula that deserves to be brought to the screen.

The Count’s Side of The Story

Yes.It is excellent as an audio book. After all, Dracula is talking on a tape. The good Count gives his version of events detailed in Bram Stoker’s novel. I read this book years ago and thought it was just O.K. I hadn’t read Stoker’s book, I thought it was enough to know the story via movie adaptations and various other secondary sources. It was, and the book does stand on its own. Recently I read Stoker’s book. With that being relatively fresh, it brought a greater appreciation to Saberhagen’s work. He mined Stoker’s inconsistencies to good effect and weaved a narrative that perfectly dovetails with Stoker’s version. Great listen.

Get this now. It's fantastically good.

The narration is masterful. The story is enshrouding. I give it four stars only because I consider all fiction inferior to nonfiction, but this novel is superb. Get it now.

I am joy to the humor so much! I also like that they may Dracula into a good guy, I never heard that one.

Wonderfully dead and am amazing story! turn the narrator's accent adds to the story . Get them all!

Fred Saberhagen did a fantastic job in this stoy. Bringing Dracula into our time to tell his side of the famous tale. Robin Bloodworth have us a dramatic and compelling reading of Vlad. Will worth a credit.

I Absolutely loved it! I am a Huge Dracula fan. I love anything Dracula related.