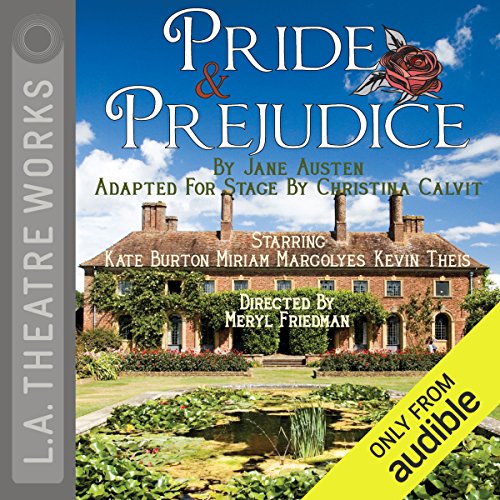 Jane Austen's classic romantic comedy is the sparkling tale of the Bennets, a family blessed with five daughters and a mother desperate to marry them off. The tempestuous pairing of the witty, independent Elizabeth and her arrogant but honorable suitor Mr. Darcy sets the standard for all great couples of stage and screen. Although many have tried, few literary romances have matched the wit and gentile satire of Austen's Pride and Prejudice.
©2009 L.A. Theatre Works (P)2009 L.A. Theatre Works

What listeners say about Pride and Prejudice (Dramatized)

Turely awful. If you love pride and prejudice you will hate this version . This great book is treated with total disrespect

This performance was so awful ( you can tell the Americans attempting to do British accents ) that I switched it off after 5 minutes . Waste of money . I had to buy the new BBC dramatised version of this available on audible , which is a vast improvement .

This is a kind of Cliff's Notes version of Pride and Prejudice. Accept it for what it is. It doesn't have grand aspirations; it only wants to be fun. I think it is. In any case, the performers had fun and their audience had fun also. If you are like me, then it only takes a sentence or two in any Austen novel and you know exactly where you are in the story and can easily bring to mind the rest of the chapter so we can fill in the blanks and enjoy.

In this time of a man shortage, there were two women for every man, it was a brave woman who turned down an offer of marriage, any offer. One toothed men, fat men, ugly men, stupid men or drunkards, even a Mr. Collins could have a wife for the asking. So Mrs. Bennet, silly as she was, was not at all unreasonable in her anxiety to get her daughters married to anybody as soon as possible. With no means to earn her own living, a single woman's prospects was not pleasant to contemplate.

Mr. Wickham to our modern selves was not all that bad, just a little bad. In that time period, he perpetrated a catastrophic evil upon the Bennet family. By his seduction of Lydia, the marriage prospects of the remaining sisters was reduced to nil. A meager existence awaits. In this light, Miss Elizabeth Bennet was a very brave, principled woman, Mr. Wickham was as an evil wretch as can be imagined and Mr. Darcy was as noble a creature that ever existed. Maybe this story is a once upon a time, a Prince Charming, a fairy tale. Something gives it enduring power. I can't put my finger on the why, but I am constantly drawn back to this story, to a woman worth risking all. PS, did I say this audio book was fun?

I couldn''t bear listening to the whole thing.

First let me say that I am a huge Austen fan; to me the characters in her books are like good friends I look forward to revisiting at any opportunity. I am not however, an Austen purist, and while I certainly have my favorites, I have found something to like in nearly every Austen adaptation I have watched or listened to. Thus I was pleased to find this dramatization, by the respected L.A. Theatre Company, and couldn't wait to listen to it.

I couldn't have been more disappointed. Indeed I couldn't even get through the whole thing. With few exceptions, the acting was simply terrible, like what you might expect from say a bad highschool production, worst of all being the wooden performance of the actress who plays Elizabeth. Anytime she has more than a couple words to say, she sounds as if she is reading her lines... and for the first time, with stress in odd places.

The whole production feels very rushed too, and overly comic. Yes, Pride and Prejudice certainly is comedic, but it is also dramatic and sentimental. Not this version, though.

In short: not tolerable. Don't think it handsome enough to tempt you.

My favorite JA story and it was ruined by the screaming Mrs. Bennet, the rushed performances and the bizarre laughter in the background. Back to unabridged for me.

I never get tired of this...

Jane Austen -- there is a reason why there are so many movie/stage versions of P&P out there. It is so enjoyable to revisit as one does old friends. Delightful as a dramatised audiobook production.

Would you listen to Pride and Prejudice (Dramatized) again? Why?

Yes, I've listened to it many times

What was one of the most memorable moments of Pride and Prejudice (Dramatized)?

The moment when Mr. Darcy first danced with Elizabeth

I would love to listen to other dramatized version of Jane Austen's books.

What an abomination! Criminally mangled classic

I have lost count of the number of Austen adaptations I have seen/heard and never get tired of hearing another. I am quite a fan of Miriam Margolyes and had high expectations for this dramatized version of P&P, and as such it is with the greatest disappointment that I declare that I want the last 2 hours and 4 minutes of my life back!

Within the first 10 minutes of this version I was aware of the fact that it was going to fall far short of my expectations, but I listened all the way to the end out of pure stubbornness, just so I could give a thorough and comprehensive review. It was like driving past a car accident - I didn't want to listen to it all, but morbid curiosity had me listening to the very end.

I can appreciate and do not begrudge them the parts of the story that were trimmed, this is part and parcel of abridged versions (and the reason I give the story 3 stars), but the acting! Oh the acting was atrocious. I actually paused part way through to see if the acting company was associated with Lampoons, it was so over-driven and hammed up. I was most definitely groaning out loud at the disgrace of it several times. I, like others who have reviewed before me, am not an Austen purist, but this is so far past impure and on the road to rotten that there is nothing to recommend it beyond the name of the author and the merit of the original story. Save yourself the agony and go find a BBC dramatization - I'm off to do that right now to wash the remnants of that nightmarish performance from my mind.

Good acting. I laughed a few times. I also liked the length of the book.

The performances were wonderful, the story perfection, as expected. Austen with flair! Listen and enjoy.

This was like a movie audiobook version of the book! It was very entertaining and all of the voices fit the characters very well. I highly recommend this version if you're looking for a fully acted out version of P&P!

I did not love the choices of what to leave in or remove. I also found the performance dry. not bad really just not good.