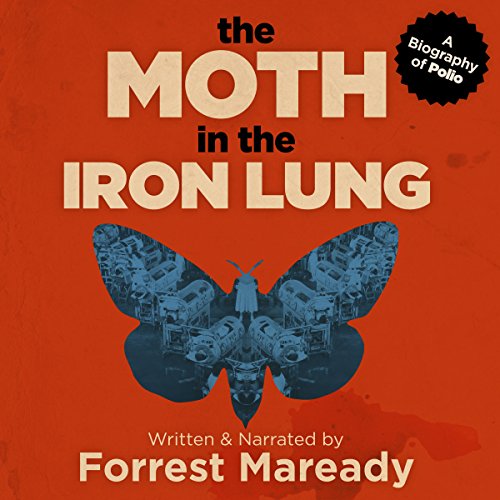 The Moth in the Iron Lung

A fascinating account of the world’s most famous disease - polio - told as you have never heard it before. Epidemics of paralysis began to rage in the early 1900s, seemingly out of nowhere. Doctors, parents, and health officials were at a loss to explain why this formerly unheard-of disease began paralyzing so many children - usually starting in their legs, sometimes moving up through their abdomen and arms. For an unfortunate few, it could paralyze the muscles that allowed them to breathe.

Why did this disease start to become such a horrible problem during the late 1800s? Why did it affect children more often than adults? Why was it originally called teething paralysis by mothers and their doctors? Why were animals so often paralyzed during the early epidemics when it was later discovered most animals could not become infected? The Moth in the Iron Lung is a fascinating biography of this horrible paralytic disease, where it came from, and why it disappeared in the 1950s. If you’ve never explored the polio story beyond the tales of crippled children and iron lungs, this book will be sure to surprise.

What listeners say about The Moth in the Iron Lung

Very convincing, thorough account of polio and the possible causes and subsequent treatments. Maready delves deep into the history books to bring the story to life, blending personal accounts with their wider contexts.

Fantastic for those who know little about Polio

Coming into this book, all I knew of Polio was the iron lungs and it was those images from the internet that wanted me to learn more.

This book so incredible from start to finish. Covering a vast amount of years from the 1800s to modern day.

The research that the author has done is astounding.

A perfect book for those who want to know the history of Polio, how it came about, theories of where it came from etc.

The book shows the full story of the famous polio and how its picture presented in the official version is incomplete and very misleading. People have a tendency to jump into conclusions far too quickly and so do the scientist in particular. It very often comes at a way too much cost to the oblivious population who trust the greatest minds. The greatest minds do not like admit they were mistaken.

As a daughter of an iron lung survivor (1948-49, I think), this was a fascinating account. I remain skeptical of government studies of health care matters of any sort; just have to look at studies involving syphilis, swine flu, pandemic bird flu and more recently the Zeke virus. Accounts such as the polio story and others should continually "follow the money" and include that information and findings.

An important book for all students of history

This is a must read for those trying to make sense of the puzzle over today's vaccine mandates. And the story might be devastating to anybody who wants to keep believing that pharmaceutical companies have always had their best interest in mind. Narrative style makes it easy to follow the thread. Protect your health.

A Necessary Recount of The Man Made Polio Epidemic

Forrest Maready's fascinating recount of the Polio Epidemic through the lense of man made disease caused by heavy metals and pesticides is a must read. It uncovers how the early use of lead arsenic pesticides proceeded by the use of Paris Green had an uncanny nack to track Polio outbreaks throughout the US. Boston was ground zero as there was a plague of gypse moths which were introduced into the region following the Civil War.

Clear, to inform the reader of early cases of infantile Paralysis caused by mercurial based medicines and teething powders used up until the 1950s. We are informed of how Poliomyelitis of the anterior horn, infantile Paralysis, would cause paralaysis typically of the lower extremities without loss of the sense of touch. The disease, polio, which would later be discovered in the quest to find a single cause for infantile Paralysis using Koch's postulates, was quite common and bening before the 1890 outbreak in Boston.

Most likely, with the stomach lining weakened due to pesticide poisoning the Polio virus found a direct path to the front of the lower spine and created lesions of the Grey matter. These lesions resulted in to infantile Paralysis.

And so the tale continues in which numerous causes were discovered along the way by leading researchers including a strep like bacteria; however, such discoveries and understanding of man made disease would get lost along the way.

Eventually, the peak of the Epidemic occurs after citizens are bombarded with DDT following world war 2 in the 50s. The American public keenly aware of the toxic effects began halting the use of DDT in the mid to late 1850s around the same time Silent Spring was published in 1962.

During this time, the Cutter incident, occurred in 1955, in which his inactivated polio virus vaccine was not fully inactivated. This resulted in more than 40,000 cases of polio, 200 cases of infantile Paralysis and 10 deaths.

With a new definition for polio, and two new vaccines the "rates" of polio dropped along with the decreased use of DDT and heavy medicinal metals. Was it the vaccine? Was it the reduction of heavy metal medicines? Was it the elimination of DDT in the US which led to the decrease of infantile Paralysis?

Much more is discussed in this well researched book. Including the history of the iron lung and counterexamples to the argument that better sanitation resulted in first world citizens being susceptible to infantile Paralysis.

Did you know that, because I surely did not...

The story starts with accounts of history that would seem to be irrelevant, however as the book progresses, the connections becomes clear and insightful. Overall this is an interesting listen and would recommend it. I have learned something I did not already know.

I’m willing to overlook someone’s past works if something seems to be solid. And this did. Until I did some fact checking. I hadn’t read the authors other books, only saw them by title after I started this one. But I still went ahead…
But the science just wasn’t there, the facts were played with and evidence chosen to fit his bill. My qualms with the book just piled up through my reading and I had to put it down halfway. This is a misinformation piece, not something audible should be even selling.
This stuff undermines science by dressing up as a lookalike, but those who take the time to study what we read can tell the difference. I’m a medicine student, so I thought this would be a relevant read, ended up throughly irritated with the book’s constant misrepresentation of simple facts.

“Humans prefer a heroic story, rather than one of dismal failure.”

Incredibly fascinating and illuminating. So many details I had never heard of. Can't wait to listen again.

Thoroughly researched, but presented in an easy to follow, story-like way. A highly recommend read!

Enthralling! An absolute must read!

“The Moth in the Iron Lung” is a must read for everyone. Everything done in our current “health world” is based on the history of its modern beginnings. Fascinating story written in a way that is not only interesting but captivating. Learn the history of the iron lung and polio, the “disease” that changed the world. Be prepared to be blown awan

Sorry, but I’m deeply involved in polio eradication and Maready is missing more facts than he has. And many postulates he puts forth as facts don’t make sense. Example: if polio caused/facilitated by metal poisoning why is it a summer disease? Why has it historically spiked after the haj? Why is it presently in Pakistan & Afghanistan and nowhere else?