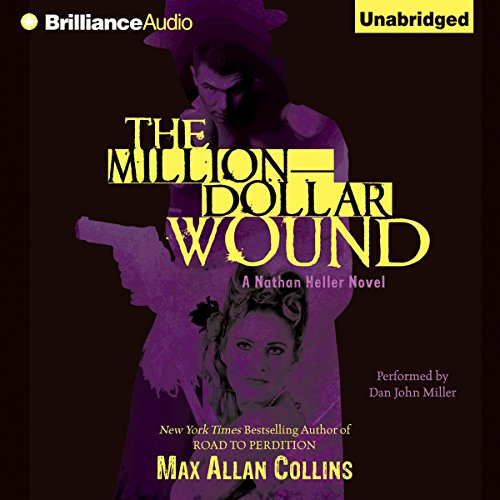 In 1942, Chicago P.I. Nate Heller and his childhood pal, boxer Barney Ross, join the Marines and see bloody action together at Guadalcanal. Upon his return to gangland Chicago, the shell-shocked Heller - more dangerous than ever - is thrust into the midst of an inter-gang war to depose Capone’s successor, Frank Nitti, whose minions are infiltrating Hollywood movie unions.

In this crushing finale to rough-and-tumble Nate Heller’s Frank Nitti trilogy, Max Allan Collins delves into the damaged psyche of war veterans as a full-on gangland war threatens to explode. As tempers in Hollywood flare-up, Heller attempts to solve a murder committed behind enemy lines, and deal with the drug addiction of his friend Barney. But not even the company of fan dancer Sally Rand can ease Heller’s conscience as he is haunted by the events at Guadalcanal even as he’s surrounded by the murder and mayhem of Nitti’s final, violent days.

Great character but not a great plot.

I like Nate Heller and find this series interesting, but this particular story wanders about and is more historical fiction than a mystery. Given that Nate is a fictional character, the details of his experiences in WWII and in the hospital are kind of irrelevant. The role of the Outfit in both Chicago and Hollywood's history is detailed and, while I find it interesting, I never quite know how much is history and how much is fiction. (I find myself checking characters in the wikipedia in the hopes of figuring it out.) This is the finale of the Frank Nitti trilogy. The last chapter is an epilogue about what happened to the various gangsters subsequently. The writing is good and the performance excellent, so I'm not sorry I listened.

Nate Heller does not know who is as this entry opens with him in a military hospital. As the story unfolds, we quickly learn that Nate has joined the Marines along with boxing buddy Barney. While battling it out with the Japanese on Guadalcanal, Nate is wounded. What unfolds as the story moves along and Nate returns to Chicago is another Collins entry blending fact and fiction of WWII and post gangland action. The story is entertaining as usual and Miller's smooth delivery of our hero makes it an enjoyable listen.

Go back to the gangsters of the 30s and 40s.
You feel like you are there.
I am going to read all the Heller books.