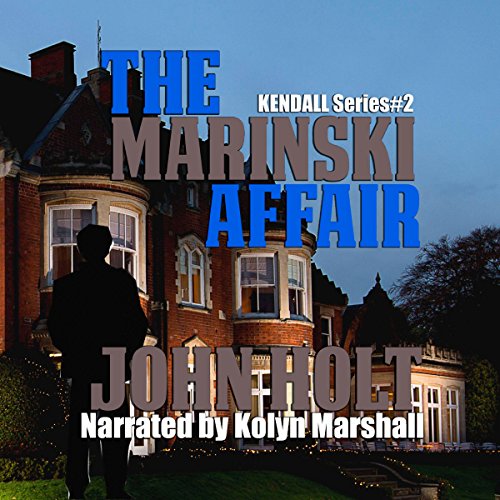 By: John Holt
Narrated by: Kolyn Marshall
Try for £0.00

The Marinski Affair began as a dull, mundane case involving a missing husband. Okay, so he was a rich missing husband, but he was nonetheless, still only a missing husband. The case soon developed into one involving robbery, kidnapping, blackmail, and murder. But was there really a kidnapping? And exactly who is blackmailing who? Who actually carried out the robbery? Who committed the murders? Who can you trust? Who can you believe? Is anyone actually telling the truth? What have they got to hide? And what connection was there with a jewel theft that occurred four years previously?

All is not as it seems. Tom Kendall, private detective, had the task of solving the mystery. He was usually pretty good at solving puzzles, but this one was different, somehow. It wasn’t that he didn’t have any of the pieces. Oh no, he wasn’t short of clues. It was just that none of the pieces seemed to fit together.

Although a standalone novel, it is also the second in a series featuring Tom Kendall, private detective.

What listeners say about The Marinski Affair

Tom Kendall and his sidekick Mollie are both very good characters, and I found that this book was very easy to read and very hard to put down.
If you like stories that keep you guessing, letting you think you know the answer until you realize you were being led up a blind alley, then this is the book for you.

love it love it

brilliantly read. story got better and better I want to become a crime detective. thank you John xx

I loved listening to this book. The narrator is really good.


He comes across as a Columbo clueless at times and rambles on but always gets his man !!


I loved this story and trying to figure out which trails were true or false.
would reccomend this book to all!

Brilliant book really enjoyable can't wait to read the rest of the series, loved it

The story is good.The repetition in each sentence is mindnumbing.It could be this guy wants to be like Columbo,but he fails.Did I mention the repetition?One half of the book could be cut if they edited out te repetition. Kolyn Marshall was good narrator.Then there is the repetition. I was given this free review copy audiobook at my request and have voluntarily left this review.'

a great story that keeps you guessing, its one of those books you want to listen to in one go, defiantly one of holts better books

Another nice listen with Detective Kendall. He makes himself sound so clueless at times and rambles on but always gets his results in the end. Can’t wait to see what he does next!

a kidnapping case that turned into a murder case

I loved this book! there were so many clues to put together! It was more like 3 cases they were trying to solve all at once! I loved the story and trying to figure out which trails were false leads and who was telling the truth! Definately a fun read! I would reccomend this book to all!

Mystery with an Identity crisis.

Would you try another book from John Holt and/or Kolyn Marshall?

Yes................. they have talent but this book did not work for me,It was slow and the main character is a confusing mix of British and American.

The plot twists showed promise but the characters lacked depth they did not seem real to me.

He did the best he could with the material he had.

Could you see The Marinski Affair being made into a movie or a TV series? Who should the stars be?

This is not a vehicle for any type of production without improvements that have already been
mentioned.

A good detective story. Didn't read/listen to the first book but this book can stand alone. The story makes you feel like you are right there in the story. There are twists. A good read/listen.

I have not read/listened to book one but I did not feel I was missing anything. This is a mystery book but we are told who don it, which I don't mind if the book is OK.
I found that the detective went around in circles at times and kept repeating things. I found it dragged and I ending up putting the book down a few times. The story was not bad but the book needs editing.

I liked the narrator, I thought he suited the book and he voiced all the characters.

the author really starts to come into his own in the book. things remain pretty mysterious up until almost the end. you have your suspicions but your not quite sure exactly what happened. this can be read as a stand alone.

i highly recommend this book! it is so much fun just trying to solve the mystery and figure out who did it!

loads of twists and coverups

It always irks me that people don't have time for questions. but if it were their friend or relative would they have the time for questions??? Ignorant and selfish. Duplicities uncovered. Kendall is getting more competent and less of a bumbler. I enjoyed it. especially recap at the end. I voluntarily listened to a free copy of this and am giving an honest review. The narrator did a good job with voices and expressions.

The story is good, I like the premise and love a good detective story. It does move a little slow in parts. The main thing killing me with this book is the dialogue. It is killing me. It is like this is written for a high school English class by someone who doesn't know how to write dialogue. I prefer a realistic dialogue between characters, This is stilted, and there is way too much descriptive language within the conversations between characters.

John Holt open up a world of an old fashion detective story.

There is no corse Language in it, or sex scenes. Although there is some violence it does not go into great details. And because of this I feel that this story could be read by young adults as well.

So if you don’t like books with guts and gore in it. This book could be for you. This is John second book I have read and I have enjoyed it them both.

Narrator Kolyn Marshall does a good job bringing the characters alive with their own individual voices. There is a couple of glitches but John is working to get them fix. And they don’t take way from the story at all.

This audiobook was provided by the author, narrator, or publisher free of charge for a honest, unbiased review.

I love the In-N-Out detective work, Internet detective who thinks things out when people think he’s talking to himself, much like me.
I would recommend this book to everyone. Great story done by a great narrator I look forward to more.

This is a fantastic mystery with lots of twists and turns that had me guessing the whole time. I love mysteries because its like putting together a puzzle as you listen. The Author an Narrator have done a fantastic job at bringing the story and the characters yo fruition. I am loving the series and definitely recommend this read.
Shauna Joesten