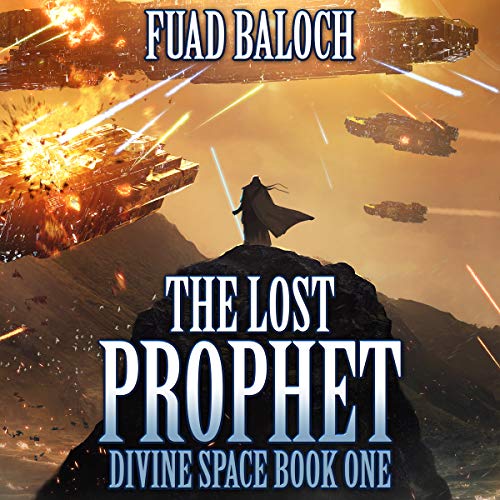 A prophet from the past. A world under invasion. To save his homeland’s future, he must pit ancient powers against a space-age enemy.

Medieval prophet Gulatu Koza often looks to the heavens and imagines his eternal reward. But when his day of reckoning arrives, he wakes up to an Earth 800 years in the future. Above him, he’s shocked to see familiar stars sharing the sky with strange ships in flight. No sooner than he makes his peace with the curious new world and the alien colonists living alongside humans, a hostile fleet arrives with a bloody purpose.

With Earth under attack, Gulatu struggles to help defend against an enemy light-years ahead of anything he’s ever experienced. But when he comes into contact with ancient alien artifacts, his own powers of prophecy grow in ways he could never have divined. In the face of startling new abilities and intergalactic war, Gulatu must make an impossible choice: Betray the cornerstone of his faith, or stand by as humanity fights a losing battle for survival.

The Lost Prophet is the first exciting story in a duology of sci-fi fantasy novels. If you like mind-bending adventures, earth-destroying stakes, and a touch of philosophy then you’ll love Fuad Baloch’s compelling tale of time travel and extraterrestrial invaders.

Buy The Lost Prophet to save the world from an alien threat today!

What listeners say about The Lost Prophet

I'd be lost too

totally feel for the lead character as he struggles to comprehend his new place in a new situation. the voice is a calm steady pace that moves the story on nicely and really allows you to grasp the full effects

Story is a solid 4-4.5 but I suggest get it as an audio book

So the story is well done and I enjoyed it. I recommend reading this book as an ebook or even on paperback if offered. If I get a chance I will go back and read it that way.

However the author is also the narrator and I’ll give him props he can do narration just not for this type of book. I would suggest an older man recounting a mystery would be his style. For this type of book it was not the right match. He voice is very calm and not the type of excitement the story seems like it should. Plus I will be honest even after listening to the book I have no idea if he is saying Alf or Elf as the god and when I heard Alf I just kept thinking of the old 80’s/90’s show I saw as reruns as a kid.

This is an honest and unbiased review left in turn for being given this book to review.

Not sure how to put this Book into a genre it tries to be different Books in the same Book.


If you are looking for a Audio Book that is creative and has a strange variety of characters then you may enjoy this Book.


The Narrator did a good job with the material.

Fuad Baloch wrote an Incredible hard core science fiction.
Discovering new author showed up out of the blue and write such a beautiful space opera is not normal for me.
Excellent language, beautifully written.
Also not normal to me is that the author himself have narrated his own audiobook and have done a perfect job of it ( no other narrator could have done the Prophet voice so convincingly ).
Also something about this audiobook, I can’t put my finger on it but it did reminded me of Dune.
The problem about this Space Opera is that the author have divided it into two books, the first book is not a simple one and slow which if you are not a hard core SiFi lover I believe that it can cause people to give up on finishing and continuing to the second book where it really gets good, with action and twists.


So yes I do recommend this audiobook, stick to it and move to the second one.


Got this audiobook for free in exchange for an honest review.

Good but just short of great

I received a free copy of this book in exchange for an honest review.
The book is ok, but I just wouldn't put it in a classic category. It was well written but just a little weird in places. I think the narrator helped to bring the story to life.

Galutu is a time traveling prophet. He struggles with his faith, his identity and loving his wife who has been dead 800 years and loving an alien woman and a human woman in his present. While I would have loved for there to have been some actual polyamory themes here only polygamy was mentioned. Clean book, only one kiss.... no real curse words, other words used in place of my favorite F word.
The story was really good, very glad I listened to the audio version or I may have gotten hung up on names, planet and civilization pronunciations....
I love time travel and I love science fiction and fantasy. If you are looking for something altogether different than anything else you’ve read I’d recommend this book.
I was voluntarily provided this review copy at no charge by the author, publisher and or narrator.

A Prophet loses his Faith when he most needs it.

The Lost Prophet is a fascinating start to what is going to be an epic saga. It follows the path of Gulatu Koza, known to many as the Prophet. He is seen as the successor of the Prophet who once lived 800yrs previously and was a true Prophet to the divine being Alf. However, this Gulatu, the successor has little or no faith in his own abilities as a Prophet, and finds it difficult to take the worship of others when he cannot even reconcile his on faith.
It is an interesting comparison, as at the very start of the book, we get to live the final hours of the prophet, to see who this amazing person is, 800yrs in the past, before we are shifted forward to the reincarnation of him, in his new body.
Although Gulatu is the successor, and thus is kind of used to a time 800yrs in the past, this new body has had some military training as a Ships Counsellor, and is working with the Captain to help the crew with the difficult times of the war. However, he gets mixed reactions, despised for being who he says he is, revered for who he says he is, even feared for it. Even the Captain hates him.
However the Galaxy is at war as multiple species vi for control of precious minerals, shipping lanes, planetary resources and planets themselves.
Some are allies, some are full on aggressors, and some are just caught up in the galactic war, trying to defend themselves.
This book is a fascinating tale of a man who has religion, but is lacking ‘faith’ in himself, something that everyone else needs most at this crucial turning point in the galactic war. Especially so when it is revealed that one of the races reveals that they belief the Prophet to be the Messiah of their people, their saviour, and that he will change their race and species forever.
There are some wonderful characters in this book. The Prophet himself, from the first pages were we meet this incredible character who is a revered and iconic personality, much loved by those around him, and even more so by those who see him as ‘The True Prophet of Alf’. His reincarnation though is nothing like the original character. He is flawed, unsure of himself, his position as ‘The Prophet’, he is even unsure of his own faith. However, (without spoilers), the development of this character as we move through what is going to be an epic series is not only complex, and immediately making you want to know the fate of this once great man, who is now struggling with the very tenants of his faith, but it is also incredibly powerful and well written.
There are several other major characters in the story, Ruma, a young Naval Officer who at first sees Gulatu as a problem, but as the story develops, she begins to see and understand that he is a lot more than everyone thinks, he is not a false prophet, or the faithless prophet of a dying religion.
The other major character is Yasmeen, who was the wife of the Original Prophet, and is also in this new reincarnated Universe.
The story is set against a galaxy at war, and it is very obvious that Gulatu, Prophet or not, is going to have a part to play in this war (Especially when one of the species in the war see him as their Messiah).
This is a fascinating story of Religion, Politics, War, Love, with some epic starship battles, some amazing characters and some exceptional writing. The story does feel a little slow in parts, but I think this is because so much of what is out there these days is so full on, that when you actually come across some well written character work that takes its time to tell the story properly, you forget this is actually how good writing is meant to be.
Can’t wait for the second part!!
The author did his own narration work, and sometimes I am sceptical of this, worried about the quality of the outcome. However, there was nothing to worry about here. The narration is wonderful, very clear, with a good range of voices. He has an unusual accent, this does not affect the narration at all, it is very easy to understand, the benefit though, is that he has a very soothing voice to listen to. I actually found myself nodding off to sleep a few times as the Narrators voice is very easy to listen to. This is a fantastic audiobook.

I think i can usually see the potential in series, this book doesn't give me hope or any interest in continung.

I enjoyed the premise of the book, getting behind the characters and fully understanding what was going on at all times proved difficult. I will relisten in Hope's of a better understanding.

A thoughtful and complex book

This was an interesting book. It is quite different from any other sci fi or fantasy novel I've read or listened to before. It has a very philosophical feel to it. The narration, like the writing, is well done but kind of different... It is a little hard to describe... So, the author narrated his own book. Sometimes, that just doesn't work and can make for a really awkward listen. In this case, it isn't bad. He has a bit of an accent, but once I got used to it, I stopped noticing it. The dialog has a very formal feel to it, which also took a little getting used to. All in all, I rather quite enjoyed the book and would definitely be open to more books in this series.

wow it was a long ride