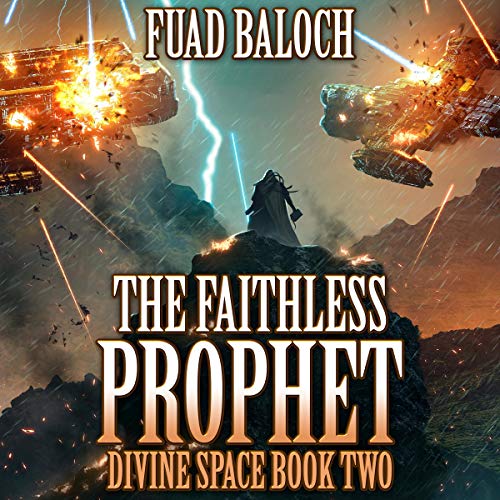 Even the prophets can lose faith.

Gulatu Koza has come to realize he is neither the prophet humans of Doonya expected nor the messiah for whom the Zrivisi were praying. As he grapples with an existential crisis, the Pithrean, ancient enemies of organic lifeforms, return to the galaxy. Ships sent to the Heronza sector to discover what the Pithrean are up to never return, fueling anxiety and fear among all species.

Reduced to being a common man, Gulatu feels liberated from the yoke of prophecy that had guided his purpose in life. Now is the time to fulfill the promise he’d made to Ruma - a minor thing in the grand scheme of things, yet the only one with which he decides to concern himself. Perhaps this one last outing will grant him the peace he craves and solidify their relationship.

Except it looks like the Pithrean have a purpose of their own for which they need him, and they will do anything to ensure his compliance.

Listen to The Faithless Prophet today to see how the prophet's life turns out.

What listeners say about The Faithless Prophet

really liked this story and the premise behind it. the confusion felt by the lead character is totally understandable and leads his story on well. his new friends are intriguing too

I’ve pretty much wrote my review for this hard core space opera which for a new writer Fuad Baloch amazed me.
My advice is don’t give up on book one which is slow but writing really beautifully, it’s this book which gives all the answers, action and amazing twists !
Narration by the author is also new to me but I don’t believe that anyone could have done a better job on it, his voice is perfect for the Prophet which is also why I said on my first book that it reminds me of Dune ( always that background voice of his thoughts ), it’s exactly the same here.
This is a Space Opera which should have been one book, it feels like one book that was torn into two which I believe is a mistake which will cost the author readers who will believe that book 2 is the same as the first and won’t get it which will be a mistake but not their fault.


For hard core science fiction I fully with out a doubt recommend this audiobook.

Got this audiobook for free in exchange for an honest review.

The Godless Prophet returns to save the Galaxy

In Part 2 of this series, we see a fundamental shift in the character of Gulatu, having used the shards to shift his ship around at the end of the first book, allowing for the defeat of an enemy fleet, and victory. With the arrival of the Pithrean, he is now seen as the last hope for not just humanity, but for the other races too, including the Yeth, the Zrivisi and the Hengoli. They want him to aid them in the coming fight with the Pithrean’s.
Gulatu however has no interest in helping with the Pithreans, he has a promise to keep to Ruma before he can become involved in another war.
And that is how this book starts, Gulatu, sitting in a cave, pondering all that has happened in the first book, trying to come to terms with his life as a Godless prophet, a man who can no longer convene with his God, other than the first and only time, in a cave such as the one as he is in now, thinking over all that has happened and all that has been, and his love for someone in particular (a rather different way of doing a re-cap of book 1, but one that allowed us to go back over events that had happened from Gulatu’s perspective)
And so begins the story, with Gulatu wanting to seek out Ruma’s Father, and, with all that they feel he is owed after the first battle, and to keep him on their side, he is offered both a commission again, and a small starship, the salvaged and repaired Aroha.
Together, he and eclectic crew of companions (Friends is the wrong word, it implies a certain relationship, whereas some of these people are not friends, some are closer, whilst others are only just tolerated for their skillsets, but they are all there because of their belief in him, and this is what makes the group both unique and powerful).
These Characters are beautifully crafted, from the extraordinary relationship he has with Ruma, a love that will span the ages and be spoken of in texts in the years to come when they mention the modern day version of Gulatu Koza of Irtiza the Prophet, to his just as emotional relationship with the Yeth, Ayel. There is some humour with Yoshina and Rosho to make sure that the story does not get too bogged down in its telling of a Prophet without a God, who is trying to prevent the Galaxy from being destroyed by a superior alien force.
Gulatu discovered in the first book that he is also gifted not just as a prophet, but as a ‘Shard-Bearer’, or someone who can use the crystal shards that all ships use to jump through, to actually move himself and other ships.
Whilst every ship has to use these great crystals situated at various points throughout each star system, Gulatu can take a crystal, and summon his power, and shift his ship and other ships through ‘his’ crystal. This allows him to move without having to be anywhere near the Systems Crystal, and, as a result, he can conduct hit and run strikes on ships anywhere he likes, fleeing before enemy fire hits them. He won the original battle in the first book using this ability, and now everyone is expecting him to do the same for the up coming battle with the Pithreans.
But, being a man of his word, Gulatu is more interested in helping Ruma, finding her Father and returning him to her, keeping the promise he made.
Whilst the story starts off with this adventure to go find Ruma’s Father, it soon moves to a multitude of other things as our ‘Prophet’ is again embroiled in Galactic Politics.
This is a fascinating read, full of intrigue, exceptional characters, that are not only engaging, but creative, and in-depth. The world building is exquisite, with these remarkable worlds full of stunning creatures, and outstanding backgrounds to get lost in. It is not just the Characters and the backgrounds, there are a wealth of Aliens in these books, from the standard Human, to the totally robotic Yeth, and everything in between. This makes the story even more captivating as you are faced with different aliens consistently, engaging you in from multiple aspects of the story.
If you enjoyed the first part of this series, you will love the second, as the writing has matured, and the story is slightly better than the first.
This is a series that is well worth the read!
Fuad Baloch again does his own Narration, bringing his unique voice to that of Gulatu and the other Characters. I will admit that this is probably not quite as polished as some of the other more advanced studio’s, however, Baloch has such a melodic voice, so soothing and easy to listen to, that it is very easy to sit and listen to this story. He has a wonderful breadth of characters, but he really gives Gulatu a lot of energy when he talks, making him sound like a true Prophet of the ages. This is a good read, but it is a wonderful listen.

OK, so this is a MUCH better book than book 1. Book 1 wasn't bad, but it was a tad formal feeling and took some getting used to. This one had more action and flowed a lot better to me. It really did a good job of picking up where the last book leaves off. I would recommend starting with book 1, though, because I think you might be lost if you don't. All in all, I think this series is worth a listen if you like sci fi.

The only thing I don’t like about listening to books is I’m never certain how the author spells characters names when I go to write a review.
This is a great series. I think it would really appeal to a very mature teen who is interested in philosophy and religion.
I could see this turned in to a movie or tv series
Our prophet is one strong and resilient man.
I wish he could just find his heart & hold on to her. Yes saving the entire galaxy is important too but he deserves some happiness!