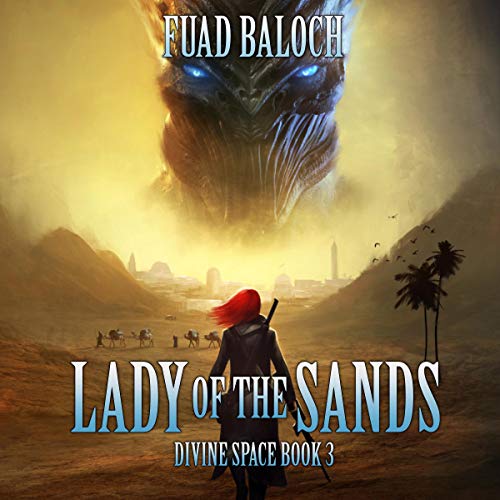 Lady of the Sands

The prophet changed the world twice. Is Ruma cursed to witness both changes?

When Ruma jumps through the Shards with her father, Gulatu brings down the Pithrean, thus shattering them and their network.

Instead of arriving at her destination, Ruma wakes up on her home planet - 800 years in the past!

But she's not alone. Because, in her mind, the first has made his home.

The Pithrean promises her a way back. But only if she follows his designs.

As Ruma struggles to make sense of the world, she finds herself in the middle of holy wars between the prophet's wife and her niece. Ruma doesn't care for either party and just wants to return to her world, no matter the cost.

But what if the decisions she makes now, in the past, have repercussions for the future?

Lady of the Sands is the exciting third entry in Divine Space series of books, exploring the hard choices one must make even if they don't care much for them.

What listeners say about Lady of the Sands

loved this switch of lead character from prophet to his love interest, smoothly taking the story forward and no doubt providing the common ground for those two if they can link together again. excellent writing

Good book, part of a series.

I enjoyed listening to this book, it's my first audiobook, and I was able to listen while doing other things or just relaxing after a busy day. The story follows Ruma after the shards are destroyed and she travels 800 years to the past. She gets to experience the shock that Gulato felt in the first book of the series. She is part of the aftermath of Gulato's death. Can't wait to read the next installment.

Lady in the Sands is the best book in the Series

In part 3 of this epic series, we see Ruma aboard one of the starships with her Father, not long after the annihilation of the Pithrean army. Ruma goes to travel by Shard along with her Father, however, she doesn’t arrive at the location she intends.
Instead, she arrives several hundred years back in the past, back in the time of the original ‘Prophet’, with the first Gulatu Koza and his wife, as well as the rebel leader, another powerful female leader.
This is an interesting change in the pace of the series for Baloch, as previously the series has focussed primarily on the telling of the story of Gulatu, the Prophet, in his Second Incantation, with Ruma as a Major Character, but Secondary to Gulatu. In this instance though, Gulatu is not seen, and the pivotal character is Ruma herself.
The other fascinating aspect of this story is that Ruma is shifted 800yrs back in the past by the Pithrean, as in the final part of Part 2 (Spoiler here, if you haven’t read Part 2 yet, stop here before going on!), Gulatu uses the Shards to defeat the Pithreans, leaving them decimated and dying. This is a desperate act by the Pithrean to try and use a Shard to upset the past, and in doing so, save its future.
As I said, it is very interesting though, as the 3 most powerful Characters are all Female, Yasmeen, Gulatu’s Wife, the Leader of the Rebels, a powerful Female figure who leads a dangerous Rebel army, and Ruma herself.
However, there is a strong element of sexism that the Author brings to bear in this story, as time and again, Ruma is underestimated as a woman, both on the individual Combat arena, and at large in the Strategic and Tactical Arena.
There are several occasions in the book in which this ‘Woman’ beats the hell out of not just a single male opponent, but several, as they totally underestimate her capabilities. Back in that time, Women did not fight, although as Ruma points out on numerous occasions, the ‘Men’ are more than happy to follow a ‘Woman’ as a leader, which makes no sense?
Again, Ruma struggles to gain acceptance of her tactical knowledge, as the men think they know better, and in several large confrontations, she watches hundreds, if not thousands die needlessly due to the ignorance of leadership.
Baloch writes such a powerful, well crafted story, giving real voice and passion to Ruma’s frustration, as well as the ignorance and stupidity of the male leadership of the time. He also manages to capture the beauty, grace, and yet the severity of both the Female Leaders of the time as well.
As for the main story, as I stated before, Ruma has travelled back in time 800yrs to the time of the true Prophet. However, she is not alone. A Pithrean travelled back with her in her mind as a hitchhiker, and speaks to her at times, telling her to change the course of history, and she can be returned to her own time.
Ruma quickly works out what the Pithrean wants, change this time so that Gulatu doesn’t exist, or his Wife, therefore changing the outcome of the battle in the future, and preventing the death of the Pithreans.
Ruma decides to not interfere in the past so as to not damage the future, but very quickly upon arriving, she finds that she can’t help herself, she has to act to save the lives and dignity of others. One thing leads to another, and very quickly, Ruma finds that she is quickly on the verge of either letting the past unfold, but in ways that she has not seen happening, or she can interfere, and try and correct some things she may have disrupted, but also correct some wrongs that are occurring.
This is an amazing book on so many levels. There are the incredibly fascinating Political elements of the rights of Woman, the Military elements of how Ruma is affecting the tactical and strategic situation with her knowledge, there is the extraordinary situation with the time travel and all of the ramifications and outcomes of that, which leaves you just stopping at times and sitting and pondering all the various outcomes, it is incredibly clever. And all of this does not even begin to look at the actual story, of Ruma, going back in time, trying to get back to her own time, with a crazed Pithrean in her head, dealing with the two major Female Leaders of her time, as well as the original Prophet, and her former Lover, who does not know her, and is married to another woman, a woman who is seen as an almost living Deity back in that time.
Whilst books 1 and 2 are brilliant, they are nothing compared to book 3, this is by far the best book in the series, it is a truly exceptional story, and one that will not only keep you totally engrossed, but one that you will be disappointed when you reach the end, wanting more. Can’t wait for the next book in the series!
Fuad Baloch continues to provide such exquisite narration, with his rather beautiful voice, he tells the story so wonderfully. You feel so at ease listening to Baloch as he talks to you, telling his tale of the Lady of the Sands, he is so elegant in his speech, every word spoken concisely and clearly, very easy to understand. Baloch has a wonderful range of characters, both male and female, and he gives then such passion, bringing them to life like they really mean something to him. Baloch is not just ‘reading’ the story, he is ‘telling’ the story, there is a significant difference, and he does it with so much feeling, it is a wonderful listen, and I suggest that this is a much better audiobook than it is a read.

Lady of the Sands

A great story it captures me right from the start. Ruma is put through quite the adventure. This has a great storyline. The Narrator has done a great job bringing the story the way the Author has written it. The Author is very creative and made the read very enjoyable with all the twists and turns. I do recommend this read.
Shauna Joesten