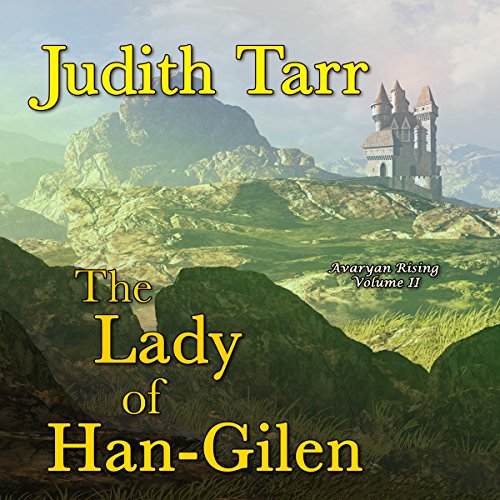 Elian of Han-Gilen is the pride and scandal of her father's princedom. She has out-ridden, out-hunted, and out-shot every suitor. Now comes one whom she could bring herself to love: No lesser man than the throne prince of the Golden Empire. But Elian swore an oath as a child to a foster brother who is now a warrior king. Consort to an imperial heir or squire at arms to a conqueror: Elian must choose, and in choosing, decide the fate of two empires.

Originally posted at Fantasy Literature. We review SFF, horror, and comics for adults and kids, in print and audio daily.

The Lady of Han-Gilen is the second novel in Judith Tarr’s AVARYAN saga. In the first book, The Hall of the Mountain King, we met Mirain, supposedly the son of the sun god Avaryan and a human princess. Mirain appeared in Ianon, where his grandfather rules, became his heir, and fought for control of the kingdom. The story wasn’t particularly original, but I enjoyed Tarr’s style and Jonathan Davis’s audio performance.

This second installment, which can stand alone fairly well, takes place several years later and focuses on a new character: Princess Elian of Han-Gilen, foster sister of Mirain. Red-haired and independently-minded, Elian has left a trail of spurned suitors in her wake, but now she’s getting older and feeling the pressure to marry. When she finally meets a man who is good enough to match her in wits and martial skills, it’s time to finally make the choice she knew she’d someday have to make. Instead of marrying the perfect suitor, and probably being a happy wife, she decides to go find Mirain, the boy she promised herself to when she was a little girl. But he’s traveling around the continent, trying to peacefully unite neighboring kingdoms under the sun god’s rule. So, Elian disguises herself as a boy and sets out to find him. If she succeeds, will he be the same person he was when she knew him? Will he want to marry her?

In The Lady of Han-Gilen we learn some of Mirain’s backstory, we find out what happened to his mother (the king of Ianon’s daughter), and we learn about the sun god’s enemy and why Mirain wants to unite the kingdoms. (This, of course, is viewed by the other kings as Mirain’s lust for power.) We also become reacquainted with Mirain’s squire and we learn that Elian has some powers of her own which might be useful to Mirain’s kingdom.

The story started off well. Elian is easy to like, at first, when she’s knocking off the suitors who aren’t smart or strong enough for her. But once she finds Mirain and he doesn’t act like the rest of her suitors (apparently he has no idea how to woo a woman, which is surprising, because he knows how to charm everyone else), her confidence dwindles and this fiercely independent red-head devolves into a spineless ninny who can’t decide who she loves and what she should do. “I love Mirain! No, I hate Mirain! I love the other guy! Damn Mirain for not helping me make up my mind! Does he love me? Does the other guy love me? I love Mirain! I hate him!” This got boring fairly quickly, yet it went on for hours. Unfortunately, not even the immensely talented Jonathan Davis could make it interesting, though he tried valiantly, contributing lots of emotion and angst to Elian’s indecision. But, really, how much pleasure can you get out of one fickle girl’s waffling? There’s plenty of fist clenching, smoldering, and glaring that goes along with all this, but not enough to make me care. There’s more to the story than the romance, of course, but by the time important events started happening, I was annoyed and ready to be done. It was too little too late.

I mentioned in my review of the The Hall of the Mountain King that Judith Tarr’s style elevated that novel above most standard epic fantasies. That style is present here, too, and it’s often lovely, filled with old-fashioned sentence structures, interesting imagery and vivid metaphors. But with all of the repetitive emotional outbursts, it mostly feels heavy and overblown.
I’m so thankful to Audible Studios for bringing out so much middle-aged SFF in the last few years (this one’s from 1987) and recruiting excellent narrators like Jonathan Davis (one of my top five favorite narrators) to bring these stories to life. Unfortunately, there wasn’t much he could do with The Lady of Han-Gilen, despite his best effort. It’s just boring.