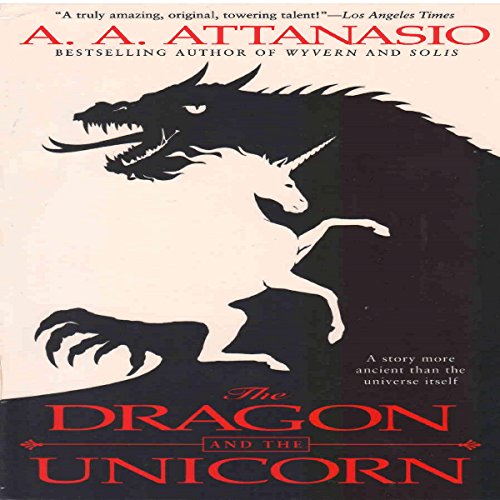 The Dragon and the Unicorn

The first volume of the Arthurian fantasy series, The Perilous Order of Camelot, The Dragon and the Unicorn answers the mythic question, "Who were King Arthur's parents?" Legend says mortal enemies: the British warlord Uther Pendragon and Ygrane queen of the Celts. Merlin brought them together. But who is Merlin? And how did his magic unite such ill-starred lovers to bring forth the world's most legendary king?

The demon Lailoken, as old as time, is tricked by angelic powers, the Fire Lords, and trapped in a human body. He becomes Merlinus, a wandering wise man expert in magic, destined to work for good among humans, opposed by the Furor, Odin. An encounter with the unicorn - a spirit similarly earthbound - brings him to Ygrane, queen of the Celts, and she sets him a task to find her king, a man seen in vision and fated to be her love-match. Merlinus-Lailoken seeks and finds him: Theodosius, a stable worker. But Ygrane has commanded the demon-wizard to bring her a king, so Merlinus sets to work making one.

What listeners say about The Dragon and the Unicorn

Read by an angry granny

I read several A A Attanasio's books 20-30 years ago starting with the Radix Tetrad then several others. I always enjoyed the way he blended the cosmic into his stories.
With some trepidation I ventured back to the Radix audiobook a few months back. I was fearful that in the intervening period it might have turned out to be corny nonsense that would appeal to my teenage self. Thankfully that's wasn't the case, I thoroughly enjoyed it again.
With that in mind I decided to try the Arthor series as I had not read them.
I enjoyed this book, it dud well to blend the typical Attanasio cosmic, Gods, universe, light etc into the familiar Arthur story. Having said that though it was probably a bit harder to get into... It took a while for the story to settle down.
I'm not so sure about the narrator though. Her voice was very sharp... she sounded like an angry granny scolding her grandkids.
I don't know the ins and outs of audiobook recording... I imagine it is all Steven Toast this and Clem Fandango that...but I imagine they would apply some EQ to the recording... It sounds like they have stripped all bass and middle off this to leave only treble.
In fact, I wonder if this was dictated straight to the narrator's mobile phone? There was a very Audible (no pun intended) background police siren in one of the earlier chapters

I'm not rating this book because I couldn't finish it.

I tried. I really tried to like this book. I wanted so much to love this book.

I read the opening once, probably twenty years ago, and so many people have raved about it.

Unfortunately, the only good thing about this book was the narrator.

Her voice work was fantastic.

Ultimately, the biggest problem with this book is it tries far too hard to be lyrical. The language is several times more flowery than is needed.

To make matters worse, The first two hours are completely needless backstory that appear to have almost nothing to do with the story.

It's second biggest problem is the combination of an omniscient third person narrator coupled with present tense. Every sentence jarred me out of the story because those two in conjunction just sounds... Wrong.

After 8 hours, I had to pull the plug.

Merlinus will have to title this

Slow getting started. But paid off in the end. Lot's of wondering who is who so pay attention.

A beautiful journey. Don't give up on it. It often seems like it is going to get boring, but just wait five minutes or have a glass of wine, it will soon pull you back in with awe inspiring force. Lastly, if all religions could adopt the perspectives illustrated in this epic, we would have no foolish fundamentalism.... yet extremely devoted worshippers....

Interesting take on the legends

It took me a long time to get to this book. It is very well written. For me, the best part is how well the author ties the legend to science. It's a very interesting set-up and structure. The slow pacing did me in.

One of my favorite series of books

I loved this book when it came out in 1996, and it’s been over 20 years since the last time I read it. I knot a lot now, so I listen to more books than I read so I can continue knitting. There were a few moments early on in the recording (first few chapters) where you can hear an ambulance in the background, but outside of that, it was well read.

A beautiful journey. Don't give up on it. It often seems like it is going to get boring, but just wait five minutes or have a glass of wine, it will soon pull you back in with awe inspiring force. Lastly, if all religions could adopt the perspectives illustrated in this epic, we would have no foolish fundamentalism.... yet extremely devoted worshippers....