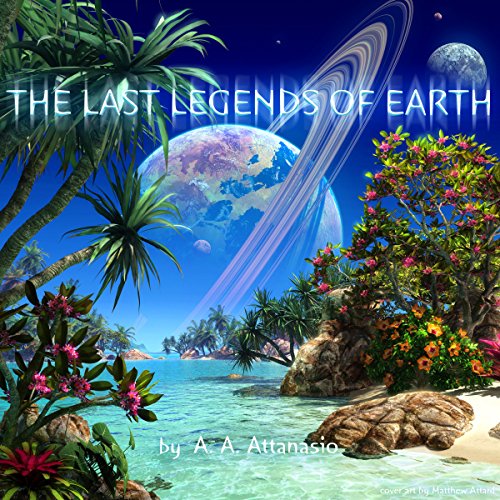 The Last Legends of Earth

Seven billion years from now, long after the Sun has died and human life itself has become extinct, alien beings reincarnate humanity from our fossilized DNA drifting as debris in the void of deep space. We are reborn to serve as bait in a battle to the death between the Rimstalker, humankind's reanimator, and the zotl, horrific creatures who feed vampire-like on the suffering of intelligent lifeforms.

Set in the artificial planetary system of Chalco-Doror, which is no more and no less than a vast cosmic machine, The Last Legends of Earth is a love story, a gripping saga of struggle against alien control, and an examination of the machinery of creation and destruction. Above all, it is world-building of the highest and grandest order, on a scale rarely seen in science fiction since the great works of Olaf Stapledon.

What listeners say about The Last Legends of Earth

I'm not too sure about this

The story is ok and in places it interested me but I got a bit confused with the worlds and names but that could just be me. I found the references to pain a bit disturbing and possibly a bit S&M so it put me off a bit.

There were some interesting comparisons between who were the good guys and bad guys so it kept me listening and I liked the characters which helps!

A favourite of mine well presented, although some of the character voicing was a bit hit and miss. The story has a complex structure with side stories to the main plot which is quite immersive, so the 25+ hours of listening time went quick.

It's almost hard to review this book. I read it a few years ago and have just finished the audio version now. The story is truly epic, yet very difficult to follow at times. The characters jump all over the place, and time in the quest to kill off this pain educing vampiric Zotly. I suggest you take it slowly and let the story sink in, it isn't an easy read ( or listen) but it's worth it.

If you could sum up The Last Legends of Earth in three words, what would they be?

What was one of the most memorable moments of The Last Legends of Earth?

What makes this story great is the way the writer is able to bring such creatures to life - and the span of history the story arcs through.

The sound quality is poor, the volume changes erratically. The narrator doesn't have any story telling skill at all. I will be sure to avoid audiobooks narrated by David Gilmore in the future.

Narration is awful, dreadful. Almost as if the budget for the audiobook was so low they went and asked Tim from Accounting to read it.

Who would you have cast as narrator instead of David Gilmore?

Anyone who knows how to use recording software

Disappointment.. the pre-listen sounded so good and then the story is so bad, it was impossible to keep track of what was happening, because most of it was simply uninteresting :/

Worst is the poor quality of the recording, at some points you can hardly hear whats being said and the next moment, its like he's screaming in your ear - Really annoying :(

I love this book, have for years. It's a very complex story of time.

The Audio performance was lacking, however. The reader was inconsistent and had issues with emotional phrases, like he would read a phase loud and excited, but then the book would say the character whispered the word.

Story is so convoluted. Everything has stupid sounding names. Between the author's overly flowery language an his not fulling explaining who is who and what is what, it's difficult to keep up with what's going on. The narrator stinks too. Maybe the worst sci fi novel I've ever read/heard.

Bad dinner theater. The narration of this book very nearly ruined this book for me.

I read this book a few years ago and instantly fell in love with the story. The way in which Attanasio manages to tell a tale that spans 7000 years through the experience of the main characters is really unique. The worlds that he creates or rather that he has the Rimstalker create are an astounding concept that really stick with me and I am sure that I will return several more times.

Atanasio creates worlds and realities like no other .. Lengthy be patient.. invest.
Listened to Radix first then In Other Worlds.. I recommend this sequence.
One complaint: the voice effects for certain dialogue was very hard to understand.. could have down without .. just not necessary.

I felt like I was in algebra class again.
I never connected with any of the characters and the voice actor was a sleepy monotone.

audio got a little rough at a few points. otherwise a great performance by the voice actor