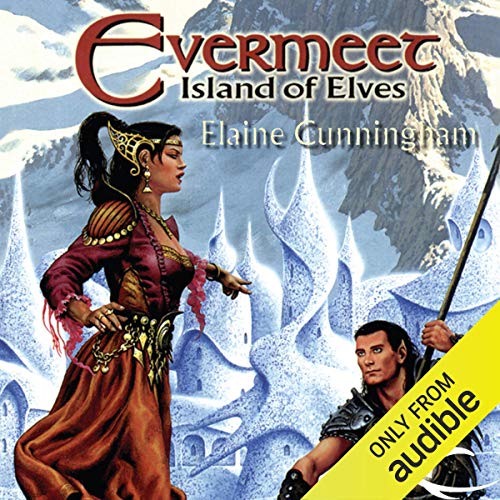 By: Elaine Cunningham
Narrated by: Kirby Heyborne
Try for £0.00

Although Evermeet seems to be a monument to the strength and solidarity of the elven people, its history is one of conflict. At the heart of its story is Amlaruil, Queen of All Elves. When Evermeet comes under attack, her sacrifice holds the last hope of saving the elven homeland. A classic fantasy centered around the clash between good and evil in a beautiful, magical, and romantic land.

What listeners say about Evermeet

if I can not be honest your review system is absolute garbage, less than worthless.

DnD players should read this

I read this years ago and just recently got it on Audible. All the lore I've used for my own campaigns has been most valuable. Plus it's a fun story that still holds up.

I’ve read the book several times and decided to try the audible. The narrator does a very good job.

I tried this book twice . Both times I found my mind wandering to chores or drifting off to sleep. I’m not sure if it was the narrator’s rendering or the over complicated names that made it hard to follow . I simply could not get into it .

liked it, wish it was a bit better about introducing characters. some characters seem to just kinda come out if nowhere

great story, some mispronunciations though

it is a very good story. the narrator needs to learn some of the words.

Amazing voice acting. The sorry was excellent. Loved the history of the people. One of the best realms books I have read

The book weaves stories in and out over and around in a way where you cross the same event in time from multiple different points of view. This works, kinda like Pulp Fiction in away if you aren't expecting it at first it's a little unbalancing.

A dozen stories of a dozen elves

Would you listen to Evermeet again? Why?

Evermeet takes a but of an unusual approach to telling its story. It is almost an anthology of short stories covering the long history of the elves of Evermeet and dozens of its important figures with all their hopes, dreams, plots, love, betrays, triumphs and failures. It is not for the uninitiated into the Forgotten Realms but for a fan this is a fantastic look at the history of the Realms from the perspective of Evermeet's elves. Each story is great fun, but slightly uneven with some getting a lot more time to develop their character's then others. It makes a great companion piece to Cunningham's Songs & Swords books which I recommend you read first as this story references some of the character and events from that series. In the end it is fun read and a solid read if you enjoy the D&D style of fantasy novels. I would absolutely listen to it again whenever I read through/listen to my collection of Forgotten Realms novels.

Lolth has long been a distant threat in the Forgotten Realms but this is the first book that really dives into her character and give back story and context to the spider queen. I wish the books had been able to spend more time getting into her character and how she changed from Arrashuni into Lolth but with it covering so much history sadly we only get small snippets of Lolth's history and schemes.

Have you listened to any of Kirby Heyborne’s other performances before? How does this one compare?

I have not listened to Kirby Heyborne read before but he did top notch work with a large and constantly changing cast.

No since it jumps forward to different characters and different time it had some natural breaking points where I turned off the audio novel and saved the rest for another day.

While I don't think this is the best of Cunningham's D&D novels, it still features her signature style of likable character you can get into quickly and sinister villains and even manages to fit in a few more complex, morally grey character along the way. Sadly stuck on the rails of the forgotten realms last history, sometimes great characters and epic events a swept aside or skimmed over since their fates were details elsewhere in the forgotten realms series which sometimes hurts the story. While it feel it wraps up a bit to quickly after the very long build up to the dire present, it is a great companion piece to anyone who is fan of the Forgotten Realms, its large cast of characters and particularly the Song and Sword series.