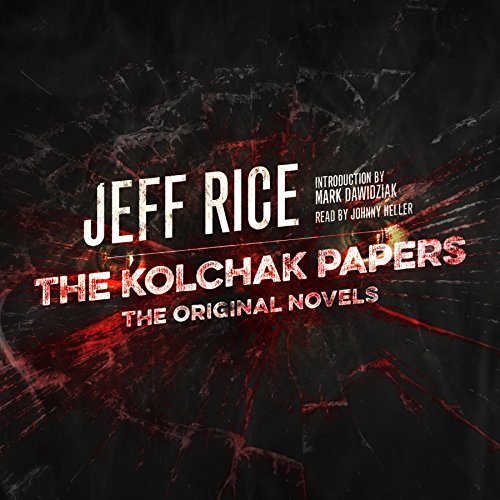 A legend is born. In 1972, Jeff Rice's novel The Night Stalker introduced Carl Kolchak to the world. This spine-tingling novel of supernatural terror became a best seller and served as the basis for the film of the same name, starring Darren McGavin and adapted by legendary Twilight Zone screenwriter Richard Matheson. After The Night Stalker became one of the highest-rated television movies of all time, a sequel, The Night Strangler, was released the following year to great acclaim.

Carl Kolchak, as the world's first paranormal investigator, would prove to be an irresistible draw for viewers and inspire a weekly dramatic television series which debuted in 1974.

A legend returns. Now, after more than three decades out of print, Kolchak's creator Jeff Rice has released the original novels which sparked the television phenomenon! At last, The Night Stalker and The Night Strangler are together in one volume: The Kolchak Papers!

Twenty-one years before Kolchak inspired Chris Carter to create The X-Files, there was only one paranormal investigator. Now fans everywhere can relive the adventures of Carl Kolchak in this single, remarkable volume!

Both Original TV Stories in One Edition

This is the novelization of the both television movies of the original Night Stalker films. They were very popular shows that begat the short lived Night Stalker series. Those of us old enough to remember them, this will be a find trip down memory lane. To newbies, this is an example of the series that inspired Chris Carter to create the X-Files. Actor Darren McGavin who played Kolchak appeared in an episode of the X-Files as a tribute.

These adventures feature the hallmarks of the classic storyline. Supernatural events that only Kolchak could stumble into. His tenacity, dogged determination and sense of humor make him a great lovable character who never seems to win. At least he does get a break in the second story, meeting a lovely lady. Johnny Heller is brilliant as Kolchak on the audiobook version, perfectly capturing Kolchak’s wit and wisdom.

Johnny Heller starts reading and just carries the listener away. For those who saw the 1970s televised series this audio version will carry you right back to Darrin McGavin's tough reporter Carl Kolchak. I'm not a vampire fan but I enjoyed the story and the abridged history of vampires I did not find the 2nd attached book nearly as good :-(

This is great fun. It captures the tone of the original series and Johnny Heller is the perfect narrator for it.

I liked the TV show as a kid and now I've listened to the books and I think they're great!