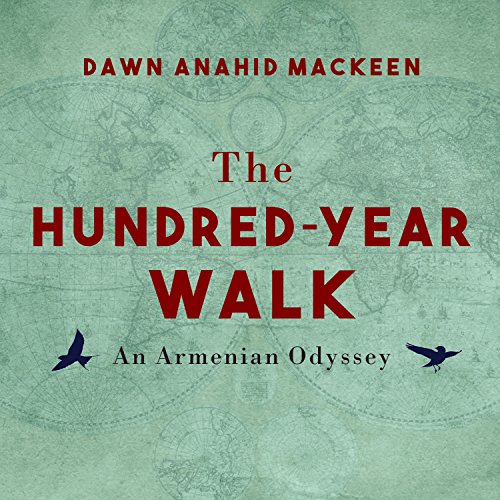 In the heart of the Ottoman Empire as World War I rages, Stepan Miskjian's world becomes undone. He is separated from his family as they are swept up in the government's mass deportation of Armenians into internment camps. Gradually realizing the unthinkable - that they are all being driven to their deaths - he fights, through starvation and thirst, not to lose hope. Just before killing squads slaughter his caravan during a forced desert march, Stepan manages to escape, making a perilous six-day trek to the Euphrates River. In his desperate bid for survival, Stepan dons disguises, outmaneuvers gendarmes, and, when he least expects it, encounters the miraculous kindness of strangers.

The Hundred-Year Walk alternates between Stepan's saga and another journey that takes place a century later, after his family discovers his long-lost journals. Reading this rare firsthand account, his granddaughter, Dawn MacKeen, finds herself first drawn into the colorful bazaars before the war and then into the horrors Stepan later endured. Inspired to retrace his steps, she sets out alone to Turkey and Syria, shadowing her resourceful, resilient grandfather across a landscape still rife with tension.

"This previously untold story of survival and personal fortitude is on par with Laura Hillenbrand's Unbroken." ( Library Journal)

I find it really moving and so harsh what people went through. History is very important. I recommend this audiobook. I would like to meet the family had in brace the family with my heart

I feel the pain and sorrow what those people went through I will always remember that date 24 April 1915.

I didn't know anything about this period of history in relation to the fate of the Armenian people. For that reason, I chose this book, believing a memoir would be a more personal story than a history book. Events follow two time periods - a modern day journey by a young woman - relative of the man who suffered during early 1900s. Her search is to find the places and people mentioned in a set of diaries which reveal Stephan's story. The other time period is about the events that Stephan experienced as an Armenian during a time of persecution. I found the modern part to be engaging. Its first person tale and lively narrator was good but these sections were too short. Unfortunately the sections telling the past are in the third person and the narrator is monotone. I got bored during these bits, even when truly terrible hardships and tragedy was being described. Overall a bit disappointing and I don't feel like I understand the period or the experience.

Everything a memoir should be. You will enjoy it!

Lovely writing... descriptive, poetic and entertaining. I also love the intertwining narrative... sharing grandfather's and granddaughter's experiences from across the years. This is not an in-depth study of the Armenian genocide or of the Ottoman Empire. But I believe Ms. Mackeen's approach is the right one. She deftly tells the story of an ordinary man's journey through a horrific time, as he experienced it. He didn't have had access to the politics driving the massacre. He would have been bewildered by it, and much too busy surviving to worry about political doings. I definitely get that. I also appreciate Ms. Mackeen's decision not to weigh the narrative down with clinical details. She writes from her heart with the goal of sharing her family's history, not a fact-finding mission. The one criticism I have about this audiobook is the narration. The voice is too girlish. As a 35-year- old woman who is an accomplished (and brave) journalist, I don't believe Ms. Mackeen speaks with such adolescent stridency. This book needs a mature, melodious narrator. But it's still very good. The poetry and imagery of the writing more than make up for the lightweight voice. Please don't hesitate to buy "The 100-year Walk" for an intensely engaging story.

I was intrigued with this book. While the discription was about a tragic event. The story is one the triumph of humanity over prejudice.

Great book, a story worth hearing. The authorss passion in her own history is compelling.

I cried often during this book: tragic & inspiring

the 4 years of hell endured by the authors grandfather was at times painful to listen to, and to think it represented a tiny sliver of the cruelty, Injustice and genocide the Armenian people suffered at the hands of the Turks. millions of innocent people died and millions more exiled from their homeland. it's a crime that the Turks never admitted, whose perpetrators went unpunished, yet somehow a few people defied all odds and survived, eventually thrived and even forgave

Read this one yourself instead of listening

The book itself is excellent but the performance by Emily Woo Zeller is more suited to a tween romance book than to a story about the Armenian Holocaust.
The choice of giving Stephan an accent is a poor one too. He wouldn't speak Armenian or Ottoman Turkish with an accent. What were they thinking?