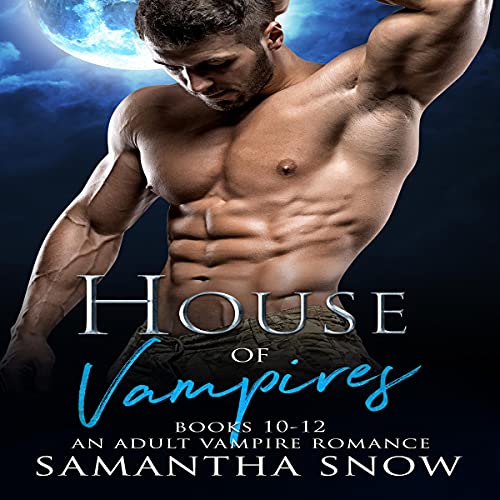 By: Samantha Snow
Narrated by: Charlie Boswell
Try for £0.00

The best-selling vampire romance series of the year finally released in bundle format. Now you can listen to books 10-12 in the series back to back, from beginning to end.

Continue where you left off, and let the magic take over....

Blair’s life becomes a show when her friends decide to turn it into a reality competition. It’s lights, camera, action for this college witch. Now men are fighting each other gladiator-style in order to become one of her mates.

The bad news? It’s a recipe for disaster that is sure to leave hearts - and maybe a few necks - broken in the end.

The good news? At least they’re no longer fighting her.

This leaves Blair free to worry about all the other things in her life, like the person trying to read her mind, the people trying to kill her, and the problems with the men who are already on her roster.

At least she’s passing her classes. That’s something, right?

What listeners say about The House of Vampires, Books 10-12

Not only were there multiple errors, such as mispronunciation and wrong words spoken, his intonation was all wrong. Simple things like he instead of she will confuse the hell out of listeners when he is simply reading the book. You never can tell by his voice or accent which character he is reciting lines for. Clearly the production lacked competent editors. Or the original publisher. Read it yourself, unless you want the voice of a grandpa dousing the steamy scenes.