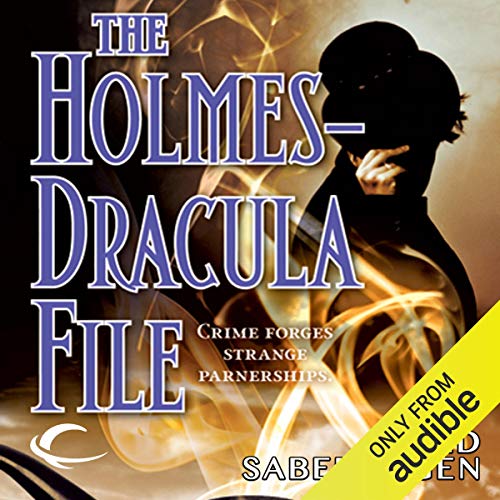 World-famous “consulting detective” Sherlock Holmes faces a terrible crisis: a ring of criminal masterminds has threatened to loose thousands of plague-infected rats into the streets of London. But the Black Death isn’t Holmes’ only problem. A lone killer haunts the city. His calling card is a trail of corpses, drained of blood to the last drop.The key to solving both crimes rests in the hands of a mysterious nobleman recently returned to London on a personal matter. His name is Dracula.

The Count is quickly entangled in a web of evil that even his immortal powers may not be enough to breach. Holmes and Dracula soon come to the peculiar realization that they may be each other’s only hope.

What listeners say about The Holmes-Dracula File

Read this book years ago and really enjoyed experiencing it again. Far better than Book 1 in this series. But the narrator - my goodness he's bad at characterisation!

I love this book series

What did you love best about The Holmes-Dracula File?

My favorite aspect of this is when you get a chapter from Dracula's point of view and then Watson's point of view. The way they see the same exact situation so drastically different is amusing and surprisingly realistic.

Dracula, naturally. As vicious and predatory as he might be and though he lies often he becomes a likable narrator. Notice the man he supposedly just wanted to disarm. He threw the rock, supposedly it hit the man's wrist, broke the wrist, bounced off and then hit the middle of the man's forehead, creating an in-ward dent and killing him. Rocks don't bounce like that, Dracula! He's clearly lying and it's written cleverly for the reader to catch Dracula's lies, particularly when you realize how differently Watson sees things from Dracula. But Dracula, again, is oddly likable.


What does Robin Bloodworth bring to the story that you wouldn’t experience if you just read the book?

I like the way Robin Bloodworth provides the voices and the occasional acting delivery that turns the audio book into more of a radio drama than just a reading of a book.

My favorite moment, though not exactly what I'd call moving, is the first confrontation with Sherlock Holmes when Sherlock uses Dracula's resting place to lure him to them.

Anyone else notice how ironic it is that a book series told by Dracula is being read by a man named Bloodworth?

I love this series, and am delighted to see we get to hear Robin's voice through all of them. I so wish it wasn't too late to send a fan letter to Fred Saberhagen. I loved these books when they were first out, and reading them all these years later is like meeting up with a dear old friend.

The ultimate Villain vs the best Detective ever!

Would you listen to The Holmes-Dracula File again? Why?

Yes, and I have - I paint, and listen to great books while I work - and this is one of them.

Hard to say - Dracula turns out to be just as interesting and enjoyable as Sherlock Holmes!

Have you listened to any of Robin Bloodworth’s other performances before? How does this one compare?

Not yet -but he's amazing. His Dracula is hypnotic , his Holmes is cleaver & witty...excellent!

The Ultimate Villain vs the Best Detective of all time! The winner saves, or enslaves, the world!

I have searched for a book like this. Found a few Holmes vs Dracula books, However, NONE are as good as this one! This is so far superior than any of the others... I'm so glad I found it.
I now want to read the rest of the Dracula tales. If only now Fred Saberhagen would write Dracula vs Batman, what a tale that would be!

The first person narrative, Dracula, is once again languid (less so than “Dracula Tape”) and “precise”, maybe suitably; perfect for many listeners. Saberhagen treads the fine line avoiding sentimentalizing Dracula but doesn’t make him unlikable.

Robin Bloodworth achieves some contrast as Dracula as Watson and Watson as Holmes speaking.

The first meeting of Holmes and Dracula is particularly well visualized.

I’ve always been a fan of Fred Saberhagen’s writing and he fits well into the audio book genre.

Eight hours was long enough for me; but I will proceed to the next book in the series.

A nice twist on a classic

Interesting story told from three sides. Mr. Bloodworth has a great voice for the characters. A worthy addition to the Sherlock Holmes library.

one of my favorite authors

no problem with finishing this book in any way except for too quickly. no spoilers. i hope you have an exceptional time reading it.
cheers,
terry