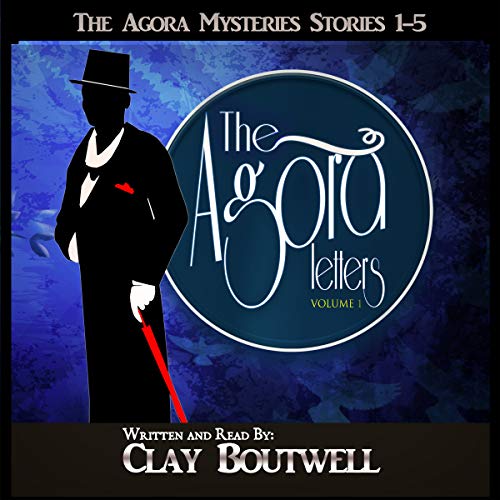 Carl Brooke, a scholar of ancient Near Eastern languages, now spends his twilight years chronicling the adventures of his youth as a leading member of the Agora Society, a society dedicated to the betterment of man.

Fans of Sherlock Holmes or Hercule Poirot will enjoy Carl Brooke and his Agora Society in these five very different cases.

1) Two Tocks Before Midnight
The Strange Affair of October 24, 1859: When a flurry of forgeries appear in museums and among collectors, the members of the Agora, a society dedicated to the betterment of man, take it upon themselves to stop the rogues.

3) The Peace Party Massacre
Kidnapped! An honorable man has gone missing, and his wife is not in the least helpful. The sheriff dithers, and every day brings death closer to a reality.

4) The Curse of the Mad Sheik
Murder and intrigue abound. At the center of it all appears a mysterious sheik and his cursed ruby.

5) The Captain's Play
Captain Barnwell, a longtime honorary member of the Agora Society, presents to the members a solved case one clue at a time. Three suspects. One murderer. Who is the murderer and why?

A delightful collection of five short mysteries recounted by the last surviving member of the Agora Society, Carl Brooke, of strange happenings in it's history and crimes solved. With a style similar to that of Dr.Watson in the Sherlock Holmes stories, the reader is taken through the processes of describing the crime itself and then the methods of it's solving.

In Two Ticks Before Midnight, Charles Tock, one of the members of the Agora goes missing for a six month period, then returns unexpectedly with a companion and an ancient scroll. It is this that launches the unpleasant and murderous circumstances recorded.

The Penitent Thief has a reformed burglar accused of murder. Everything points to his guilt but he says he didn't do it.

The Peace Party Massacre provides an introduction to Thomas Drake, and a missing man whilst The Case of the Mad Sheik tells the classic tale of transformation after a man comes into possession of a mysterious jewel.

But of all the stories, perhaps this reader's favourite is the final offering, The Captain's Play, in which the police officer who becomes an honorary member of the club, tells the members about one of his cases and invites them, through question and answer, to determine which of the three suspects was the murderer: a great opportunity to match our own detection abilities against those of the society.

Beautifully written in the first person and read with clarity and character by the author himself, this is the perfect book to gently exercise the mind whilst filling in empty hours. My thanks to the rights holder for gifting me a complimentary copy of The Agora Letters, at my request, via Audiobook Boom. It was a pleasure to hear.

The Agora Letters is written as a collection of short memoirs of Carl Brooke focusing on his work with the Agora Society. The Society is something of a think-tank and gentleman's club, dedicated to bettering humanity, operating around the time of the American Civil War. Each short story works as a stand-alone mystery while also building a cast of characters and a larger story arc. While the mysteries may not have been terribly mysterious, I found the prose and stories to be satisfying and even a bit restorative. I have high hopes for the next volume(s).

Mr. Boutwell read this audiobook himself, which gave me pause. Author narrated books can be pretty dreadful, but I listened to the sample (and then the whole book) and found Clay Boutwell's voice rather well suited to reading these stories.

each story has a varying degree of quality. it is however still collection. None of them are bad infact all of the them are quite goood.

These series of five detective stories in the Agatha Christy's genre, but much more simplistic, are a quick and light read that will not leave you disappointed. The plots are not all of that convoluted but they bring to mind a more direct approach to the detective stories of the the past. I found them refreshing and enjoyed the narrative. An interesting aspect is that while the situations changed with each story, the Agora Society group of characters was a constant. The society's members used their notable intellect and expertise to solve the diverse mysteries. The very last story turns out to be somewhat of a test to their deductive abilities presented by the police inspector. He describes to them a case he was involved in that has already been solved, in order to see if and how they would reach its solution. The author also narrated the stories and for once it did work. A good light listening experience I'm sure you'll enjoy.

The Angora Letters was an intriguing collection of stories. I really liked it. It reminded me of Sherlock Holmes stories

An interesting collection of period mysteries

The Agora Letters are an interesting collection of period mysteries taking place in the US in the late 1800s. The stories should appeal to fans of Sherlock Holmes and similar mysteries.

The author does a good job narrating his book.

This is a collection of five short mysteries. Each mystery is a stand-alone and kept my interest throughout.

The author, Clay Boutwell, did a nice job with the writing as well as the narrating. I look forward to reading future volumes of The Agora Letters.

The Agora Letter: 19th Century Historical Murder Mysteries: Volume One was a good set of short stories by Clay Boutwell. This box set follows members of the Agora society, a society that is dedicated to the betterment of man. It consists of; Two Tocks Before Midnight, The Penitent Thief, The Peace Party Massacre, The Curse of the Mad Sheik and The Captain's Play. I can't wait to read more of the Agora Society mystery series.

Listening to these stories is a fantastic experience. You can almost feel as though you have traveled back in time, and Carl Brooke himself is telling you his stories. The storytelling is simply fantastic, both from the writing of the stories themselves, and from the author narrating his own brilliant works.

If Edgar Allan Poe and Sir Arthur Conan Doyle were to collaborate, one might get the placid nature of Watson, the complex brain of Holmes, and the twisted plots of Mr. Poe nicely wrapped up in this little collection of short stories. The author's own excellent narration brings another level of enjoyment.

The Agora Letters: 19th Century Historical Murder Mysteries.. Great entertainment, a collection of cases from the Agora society. Well written and thought out, though as a Sherlock Holmes fan I do find them a little simplistic. But a great read none the less.
Clay Boutwell the author also narrated this book - and it is excellent and easy to listen to, he is obviously also a talented narrator.
I was given a free copy of this audiobook at my own request, and voluntarily leave this review.