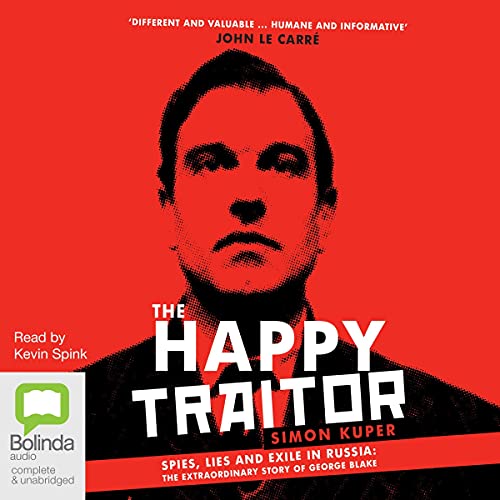 By: Simon Kuper
Narrated by: Kevin Spink
Try for £0.00

Those people who were betrayed were not innocent people. They were no better nor worse than I am. It's all part of the intelligence world. If the man who turned me in came to my house today, I'd invite him to sit down and have a cup of tea.

George Blake was the last remaining Cold War spy. As a senior officer in the British Intelligence Service who was double agent for the Soviet Union, his actions had devastating consequences for Britain. Yet he was also one of the least-known double agents, and remained unrepentant.

In 1961, Blake was sentenced to 42 years imprisonment for betraying to the KGB all of the Western operations in which he was involved, and the names of hundreds of British agents working behind the Iron Curtain. This was the longest sentence for espionage ever to have been handed down by a British court.

On the surface, Blake was a charming, intelligent and engaging man and, most importantly, a seemingly committed patriot. Underneath, a ruthlessly efficient mole and key player in the infamous 'Berlin Tunnel' operation. This illuminating biography tracks Blake from humble beginnings as a teenage courier for the Dutch underground during the Second World War, to the sensational prison-break from Wormwood Scrubs that inspired Hitchcock to write screenplay.

Through a combination of personal interviews, research and unique access to Stasi records, journalist Simon Kuper unravels who Blake truly was, what he was capable of and why he did it.

"Kuper provides a different and valuable perspective, humane and informative." (John Le Carré, author of Agent Running in the Field)

"A deeply human read, wonderfully written, on the foibles of a fascinating, flawed, treacherous and sort of likeable character." (Philippe Sands)

What listeners say about The Happy Traitor

An extraordinarily fascinating story. Never boring.
Sadly it was written from a non-Communist western perspective and it would have been better had this not been evident.
The narration had a fair amount of horrendous mispronunciations.
All in all, a gripping book and story.