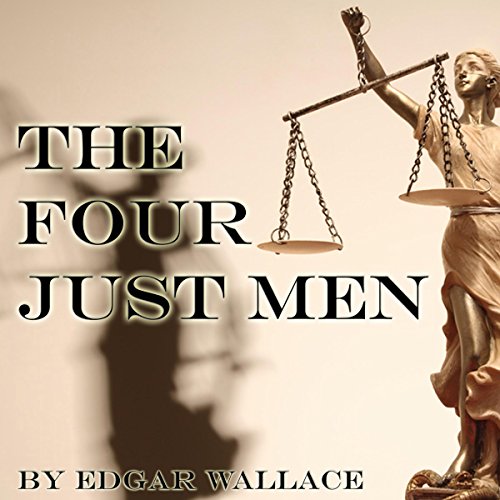 By: Edgar Wallace
Narrated by: Walter Covell
Try for £0.00

Edgar Wallace's early 20th-century thriller The Four Just Men, a best seller in its time as the result of a botched and ultimately disastrous whodunnit competition, recounts the thrilling tale of its titular protagonists as they attempt to exact violent justice on a British official hell-bent on passing a so-called Aliens Extradition Bill in parliament.

Voice actor Walter Covell skillfully inhabits the characters of this suspenseful work, deftly differentiating each from the others and creating a strong sense of ensemble in this engrossing audiobook.

When Foreign Secretary Sir Philip Ramon receives a threatening, greenish-grey letter signed 'Four Just Men', he remains determined to see his Aliens Extradition Bill made law. A device in the members' smoke room and a sudden magnesium flash that could easily have been nitro-glycerin leave Scotland Yard baffled. Even Fleet Street cannot identify the illusive Manfred, Gonsalez, Pioccart, and Thery, the Four Just Men dedicated to punishing by death those whom conventional justice can not touch.

Edgar Wallace was a soldier, poet, war correspondent, reporter, author, and playwright. He wrote more than 170 books, which have been translated into 28 languages, and sales of which have exceeded 50 million copies. Over 160 films have been made from his books, more than any other author. He was working on the original screenplay for King Kong when he died. In the 1920s, one of Wallace's many publishers claimed that a quarter of all books read in England were written by him.

What listeners say about The Four Just Men