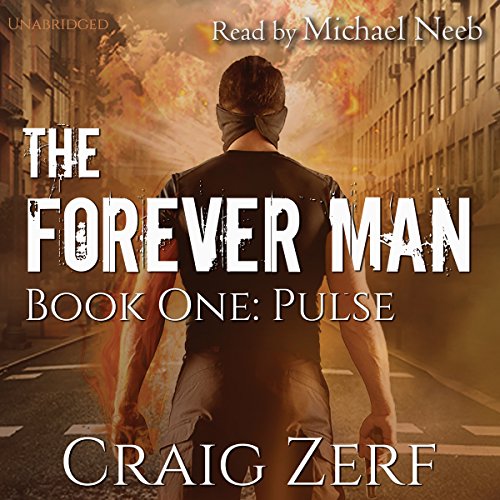 The first pulse occurred in the old calendar year of 2022. A sequence of gigantic solar flares created a series of massive electromagnetic pulses that stopped the heart of our modern world and returned us to the Dark Ages. Tens of thousands died within the first few hours as airplanes fell from the skies, hospitals ceased to work, and every form of modern transportation ground to a halt. Within days the death toll had reached the hundreds of thousands. Fires raged unchecked through the cities, water supplies ran out and survivors turn on each other as mob rule surpassed all else.

And Marine Master Gunnery Sergeant Nathaniel Hogan finds that he has been changed by the huge amounts of gamma radiation in the solar flares. They have enhanced his natural abilities, giving him increased speed, strength, and healing; indefinitely extending his life span and enabling him to be able to draw on the power of the solar flares to create magik. Making him - The Forever Man. But even The Forever Man was not prepared for what happened next.

What listeners say about The Forever Man

Good story, shame about the narration

I really wanted to enjoy this but the narrator is not suited to this at all. he pronounces words badly, for instance he say Basil as the Americans do for the plant when the word is the name Basil as in Basil Rathbone. I cannot get over how badly the narrator pronounces so many normal English words, it gets quite silly at times. He say remet instead of remit. Just a very few examples out of soooo many, atrocious mis-speakings, is that even a word ?. His ability with accents is, not good to say the least. Fyi, just speaking in a high pitch is not an Irish accent. Would not listen to anything with this narrator again, sorry.

I love books by Craig Zerf, he writes a cracking story and interesting characters, but the quality of narration on this audiobook really lets it down. Michael Neeb has the world's worst Irish accent (the priest) and seems unable to pronounce many simple English words.

Story is fine, but only 5 hours for a credit is expensive. Also the narrator's Irish and British accents are poor, which is disappointing given that the book is set in the UK.

Spoilers: I liked the premise but not the execution. The MC was a caricature of a U.S. Marine and a bad one at that. No Marine would ever do what he did and leave his men behind. Period, end of story. I did like the idea behind the book I just couldn’t get over how horribly portrayed some of the characters were. Not sure if I will listen to the next one or not.

This author's portrayal of the marines is just insulting. The soldiers in this book are like a troop of 10 yr old girl scouts crying in a corner waiting to die. Also, the pseudoscience in this book is so poorly thought out and explained, it goes something like this: Hello soldier guy. I am science man. I have determined with nothing more than a basic microscope that the bad free floating cancer genes in your body have mutated and you are now basically wolverine without the claws. I are smart...... On a side note, this book is only about 5hrs long and the author feels the need to tell you multiple short stories about unimportant people who die in really stupid or horrible ways and none of them have anything to do with the story.

I enjoyed the storyline but some what predictable. The narration was not varied or consistent sounded like a teen trying to deepen his voice for older characters. This first book will be my last book for this series

I let this chatter on in the background while cooking and really only got half the story. The reader seems to be going for speed and misses most of the books inflection while jamming through the punctuation. I do not expect full dramatization from the reader, but this felt like the guy in the back of class reading fast to get the assignment done. Redo this as it is a shame the way it stands.

Great beginning premise. Unfortunately weak characters with even weaker character development. And too many genres in one story line. Like putting every idea you ever had into one story. Also when your story is set in England use an English narrator. Not an American who can't affect any kind of accents and has no vocal skills

So I just finished listening to Book 4, which tells you that I enjoyed the storyline and the performance. It doesn't have high brow science, nor is it trying to - it's just an enjoyable romp about the end of the world - Orcs not Zombies, American Marine saving the world, magic, immortality and a few twists and turns along the way. For me, I'm leaving it at Book 4 for a couple of reasons unrelated to the writing: 1. They are short books. 1 Audible credit gets you one book that comes in around 5 hours (they're all the same length). That means that I was burning through credits a lot faster than I would with other books (most are around the 10 hour mark). 2. No offence to the narrator, but if you're narrating a story set in England - please can you learn how to pronounce words correctly. A minor thing for sure, but it's just so annoying and not just present on place names.

Almost didn't buy it because I saw a few stinker reviews but those folks are cantankerous crank cussers. Forever Man was a fun listening to on Audible.

I just don’t like the story. Not bad writing at all l just don’t get into it.