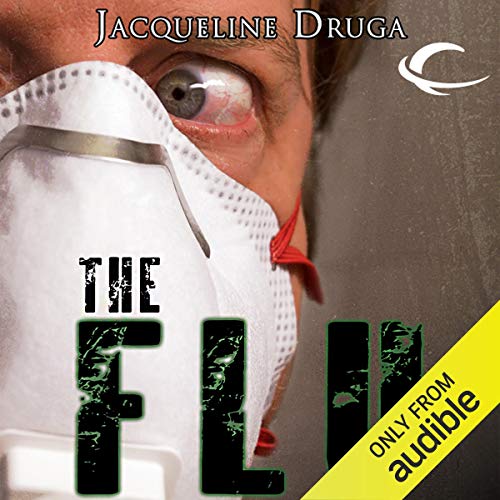 Dave Courvoisier gives a steady performance of the apocalyptic novel The Flu by Jacqueline Druga. His clear voice is an excellent counterpoint to the chaos of the story. One day, a mutated version of the Spanish Flu returns, and becomes a plague upon the human race. This strain is much more deadly than its 1918 incarnation. As people begin dying in droves around the world, Lodi, Ohio, somehow remains free of the flu. The people of Lodi discover that their test isn’t the illness, but their luck in remaining healthy in the face of death, destruction, and disaster.

Throughout history there have been several thousand different strains of influenza. Each year hundreds are active. Chances are, this year, you will catch one of those strains. You will cough, sneeze, and your body will ache. Without a second thought, you'll take a double dose of green liquid, go to bed, and swear you'll feel better in the morning. Not this time. In 1918 forty-million people succumbed to a particular strain of swine flu. It appeared out of nowhere, and just as quickly as it surfaced, the Spanish Flu vanished. Gone for good. Or so we thought. Though mankind has anticipated its resurfacing for some time, mankind is ill prepared.

Mutated and with a vengeance, the Spanish Flu returns. In a world blackened with plague, a glimmer of light exists in the small town of Lodi, Ohio. They shine as a sanctuary because they ... are 'flu-free' In the wake of the reality that they are spared, the spirit and strength of Lodi is tested. It becomes a fight against what is morally right or wrong in an increasingly difficult battle to stay healthy and alive until the flu has run its course.

It was okay. Not my favorite.

I'm a big fan of apocalyptic novels, but this one wasn't my fave. It was a bit of a struggle to listen to. It was very "conversation heavy" and didn't have enough narrative, so the characters and scenes were flat. I also thought the characters weren't very likeable. Mick came off as a "Rocky" type guy with an IQ of about 60. And Dylan was shallow, petty and immature. There were far too many scenes and conversations that were irrelevant and slow, not moving the story forward. Some scenes were great and well-written, others (especially the dialog) were really bad. it was almost as if two different people were writing it. I will listen to another book by Jacqueline Druga because I think she has tremendous potential. But I have to rate this accordingly. Sorry.

This story was more poorly written drama than a thriller or scary story, as the summary suggested. Also the narrator read annoyingly inconsistent. Overall I am glad I listened to it but the narrator and the drama ruined a good story.

I am happy with this book, the story and the narration is good. I must say I found it enjoyable, compelling to listen too and interesting. I am still unsure if I liked the character Dylan basically for the way she treated our poor Sheriff but then that was part of the fun of it all.

I would have preferred more about the FLU and the effects, but as a story it is enjoyable.

A little bit of everything...

Would you listen to The Flu again? Why?

Yes. I love these characters now. I love the way they are with each other and who they are. I would like to revisit the ones lost to the flu.

What was one of the most memorable moments of The Flu?

I loved the comical conversations between the characters, especially when Rose, Mic's mom explained the facts of life to Dylan's sons... and the moment Mic realized it.

He was as moved by the story as I was, so his emotional delivery matched my mood upon hearing it. His voice changes for different characters got a little out there sometimes, but I think it added to my ability to distinguish different characters from each other early on.

If you could rename The Flu, what would you call it?

Sanctuary. I think that word has a double meaning in this story. At first it's the town as it holds off the flu, but even when that fails, the bonds between the characters create a peace for the survivors from which they can rebuild.

Sometimes the language was a little graphic, although I must admit, it somehow worked for Rose (to a point), and the homosexual love scene made me uncomfortable with openly recommending this book to just anyone categorically. However, the characters, writing and performance were SUPERB! I appreciate any author who doesn't lazily rely on pure villainy to drive conflict. These people are complex and flawed and so appealing. I intend to visit them again someday, and I look forward to sampling the author's other works.

What disappointed you about The Flu?

This writer has a tin ear for dialogue. Really, it's kind of painful. And hello? If the speaker is petulant, I don't need the writer to point it out to me. The swifties came so fast and thick, it almost seemed like a joke.

Aaargh, the voices! Look, it's great when a narrator can develop voices for individual characters, but it's not necessary, and skipping it is better than doing it badly.

What disappointed you about The Flu?

Romance novel with a few deaths thrown in for good measure.

Has The Flu turned you off from other books in this genre?

I expected better. There was too much time and detail spent on mushy stuff nd not enough detail about the flu.

Mechanical sounding in places. Not sure if this was an editing problem.


You didn’t love this book... but did it have any redeeming qualities?

Both Story and Narrater. UGHHghh. I forgot I returned it once already. I like J. Druga, but this one is TERRIBLE

I was interested in the novel’s concept. However, development of the novel is so slow, so monotonous, so cheesy that it’s hard to get to the finish. Yes, I chose to finish the book hoping as it went on that it would turn pick up an hold my interest. The first quarter of the novel was okay, otherwise I would have given the novel one star.

It wasn’t just the novel though that made it so incredibly difficult to finish. It was the narration. The voice didn’t really have anything in it to hold my interest as somebody is reading to me. It was more like a teenager in a junior high classroom reading aloud. There were efforts made to change the modulation of the voices of the characters but it was not well done.

My advice to you is if it is one of the free selections maybe consider it. it if it is free. Do you not spend money on this book. This author will go on my do not read authors list.

Could have been good, but the dialogue was awful as was the execution of the plot. I have tried several books by this author and she really hasn’t grown much. She is one of the worst I’ve read. And I tried and tried. The narrator can’t and doesn’t save this mess.

TAKE TWO ASPIRIN AND READ SOMETHING ELSE