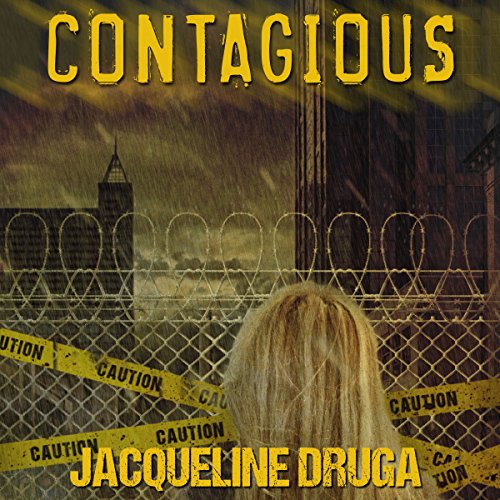 By: Jacqueline Druga
Narrated by: Andrew B. Wehrlen
Try for £0.00

What starts as an emergence of a new virus quickly turns into Mother Nature’s ultimate population control.

While attending a seminar at the Ambassador Hotel, Ava Mason is unknowingly exposed to a carrier of a highly contagious virus. The next morning, she wakes to a steady pounding on her door. Within minutes, her home is stormed and she and her three children are apprehended, placed in a van and taken away.

They are told nothing. No one is. Ava, her children, and others are brought to the Ambassador and sealed in. It is one of many locations quarantined in an attempt to contain the virus . The outbreak rapidly spirals out of control and the world is thrown into chaos and economic collapse.

What was once their prison becomes their safe haven from a world besieged with violence, illness and a world that desperately stops at nothing to end the virus.

While quarantined, Ava and the others form a bond and they watch as not only the world, but those around them fall victim to the virus.

To Ava, what happens outside the hotel is minuscule compared to what happens inside. Everything she loves and cares about is in the Ambassador. She wants only to protect her children. But can she against such an invincible foe such as the virus that pushed the world to the brink of extinction.

What listeners say about Contagious

This book was very enjoyable to listen to, though maybe not if you're depressed. The situation and characters were believable and well portrayed.

Premise we are all familiar with. And unfortunately the author doesn't really branch out from it. She doesn't make it new or interesting. I did finish it, but almost without realizing it. The ending was rushed and not satisfying. I didn't connect emotionally with any characters.... So I must say, this one is not one I would recommend if anyone asked me for a recommendation on post-apocalyptic fiction.

This goes into my do-not-repeat pile. Which is too bad.

She is a master of weaving tales

Firstly, I’ve read Jacqueline Druga before so I knew what I was getting myself into with this one. She is a master of weaving tales of all the different people that are affected by a virus and their responding attitudes, crimes, or praying!

This was no different. I loved The Flu, however, in this book we really get to delve into people’s lives. I liked being able to follow someone as they are faced with the plague and/or their loved ones dying. I think it lends itself to the reader being able to really get invested in the characters much more than when they are killed off suddenly or when they just fall out of the plot.

I also love that she isn’t afraid to start a plague at the beginning. She lets us follow the virus as it goes across the world. This particular story is mostly in America but she allows her readers to view what is going on in the rest of the world as well.

I really enjoyed the characters. I was also surprised that there was only one narrator. Andrew Wehrlen does such a good job that I thought there were at least two, if not three narrators. I easily could tell the characters apart and never had a difficult time keeping up with him. He also has a great way of really inflecting the drama into a scene that allows for the reader to feel like they are in the situation. Scary to say the least.

The overall audio was also pleasant to listen to. The performance was obviously amazing and the production quality kept up with the fabulous job that Andrew Wehrlen did.

The storyline was intense and made for a fantastic story. The ideas that Jacqueline Druga comes up with are so upsetting because I do not think she is far off from reality. It makes for an intense plot. She keeps the pacing and the characters do not shy away from danger. Sometimes stupidly, sometimes heroically.

This is definitely one you’ll want to listen to while you don’t have your mind occupied elsewhere. There are so many subtle events that missing them could create some questions. My favorite was the bit of a twist with the virus. She does this so well that she winds up adding in drama and tension seamlessly. She was also able to create drama by making the base for the virus an hotel. The hotel seems to add even more tension but as the story progresses it seems that there isn’t a safe place anywhere!

I loved how this ended and cannot wait to read more of her work.

Audiobook provided for review by the Author.

I liked how the characters were fleshed out so you were able to get to know them. The plot was plausible and the situation was believable. I looked for opportunities to listen to the story. I don't often give a five star review but this one earned it.

Well written story! With all the virus scare of today - it gave me hope.

I was engaged from the first moment I started listening! I loved this book and look forward to listening to more! I highly recommend this book! You won't regret it!

A virus starts with a sniffle and ends up with people quaranteened,where most die.If they don't,the governt will take care of them.Another great book by Ms Druga. Andrew B Wehrlen is a fine narrator

I really liked this book and was surprised how really good it was.

The character development was done very well and the emotions came through.

As always Andrew B. Wehrlen’s narration was excellent.

A world doomed by a common virus

This is the second audiobook by this author and the same with the narrator I like the way she weaves a tale so you see, feel, weep and laugh with characters. In addition she creates her story's from common virus that we may see in our area or from another country like a flu virus. And how it can and would effect our country, or other countries and finally tells of what governments might do to stop the spread of the virus and how the virus may mutate.
In this audible it a story based on families, friends who are effected by a virus something is the flu but soon it discovered it not and it was actually from India and the doctors and health agencies thought they had cured the virus. The virus starts from one cough on a plane from India to Paris for a fashion show she takes sick a doctor is called in and gives here flu medicines but in four days she passes away and for the world it is the start of doomsday for many people and soon afterwards many cities that is nuked to try control the virus.
You live the lives of a family who in the end are lost to virus and one member shot by over zealous military personnel, then you meet a pro wrestler who puts himself in harm way to help other who are sick or dieing, a nineteen year old punk rocker who starts off reckless and watch his friends die at the hotel and has to grow up fast and finally you meet the manager and staff of the hotel were most of the story is told from after everyone is quarantined at.
You find some laughter but as the story is told you feel sadness, death and shedding of tears.
I recommend this audible to everyone it is well written and told.

Jaqualine is my new favorite author! Absolutely loved this story! I can't wait for more of her work!!

I am hooked on Druga now

This was the first book by Jaqueline Druga but it won't be my last for sure.

I loved all the different story lines and how she took us out of one environment to let the reader know what is doing on beyond the core cast of characters.

There are a lot of different characters and with out the excellent narration of Andrew Wehrlen I would have been confused. I was worried when I started this book if I needed to take notes but the stories all flowed together so perfectly.