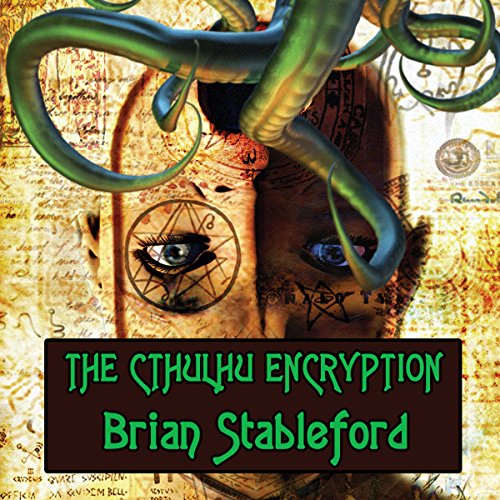 By: Brian Stableford
Narrated by: Derek Perkins
Try for £0.00

"They had been so horrible before that I dare not say that they were any more horrible when they came again, but their presence was certainly more visible and more tangible, if no less easily describable. They were still unspeakable, still unthinkable - but whether I could speak or think of them or not, they were here."

Auguste Dupin is one of the few persons in Paris who can identify the rare Cthulhu Encryption inscribed in the flesh of a dying madwoman. The Comte de Saint-Germain has a second cryptogram that's a partner to the one Dupin now owns, and believes it to be the key to a fabulous treasure hoard buried by the pirate Levasseur. Harassed by shoggoths and tracked by Saint-Germain, Dupin must find the key to the complex puzzle. Can the might of Cthulhu be held at bay? And will any answer that Dupin finds enable him and his friends to escape with their lives?

What listeners say about The Cthulhu Encryption

Edgar Allan Poe's great detective, Auguste Dupin, combined with H.P. Lovecraft's Cthulhu mythos? I had to read this novel. And I'm glad I did.

Stableford's novel, which is a first-person account by Dupin's friend, describes the unfolding mystery of the "Cthulhu Encryption," an inscription in the flesh of a dying mental patient who appears to be a prostitute but believes herself to be the legendary Isolde Leonys (of Tristan and Isolde fame). What follows is a mystery-adventure that doubles as a cultural literacy test, invoking not only knowledge of Poe and Lovecraft, but also the history of the 16th-century English occultist and medium Edward Kelley (also known as Edward Talbot) and his alchemist associate John Dee, the so-called "immortal German alchemist" the Comte de Saint-Germain of the 18th century, and both Arthurian romance and Shakespeare's play A Midsummer Night's Dream. Did I mention there were pirates, too?

I didn't realize this was part of a series (which includes The Mad Trist, The Quintessence of August, and Valdemar's Daughter) when I first listened to the book, but I think now I may have to read the others.

Derek Perkins's narration occasionally suffers from "accent drift," and his pronunciation of Cthulhu is a bit tortured, but on the whole he offers a solid reading.

What I appreciated most was Stableford's adept handling of Victorian Gothic language and description, as well as the great texture and literacy of his descriptions.

Here is an example:

"I'm surely superfluous to requirements, and far too vulnerable to bad dreams."

"Never superfluous, my friend," he said, "and not as vulnerable as you imagine."

I was flattered by the compliment. "And we have Chapelain too," I added. "All for one and one for all - like the three musketeers, Athos, Porthos and Aramis."

"More like Ethos, Pathos and Logos," he muttered, drawing his cloak around him to protect him from a sudden gust of wind. He had named the three components of classical rhetoric, from which Dumas had presumably derived two of his musketeers' names, but not the third. Chapelain, I presumed, was Ethos or Athos, and I was Pathos or Porthos. I hoped that the adventure confronting us was one in which a Logos would, after all, prove more useful than an Aramis.

There is nothing new here but a clever blend of Poe, Chambers and Lovecraft's Cthulhu Mythos.

Dry, nothing like HP Lovecraft, felt a lot like a history lesson on fictional pirates, dull conversations between characters, no mystery. Just a wast of time.

Hard to get into

I don't know if it was the narrators reading style or the story itself, but I had a very difficult time getting into this one. The story tends to evolve quickly at times, and if you get distracted you are quickly left confused as to what's going on. The narrator uses slight inflections to differentiate between the characters, but there is something almost clinical to the cadence of the narrators voice that made it very difficult to pay attention to.