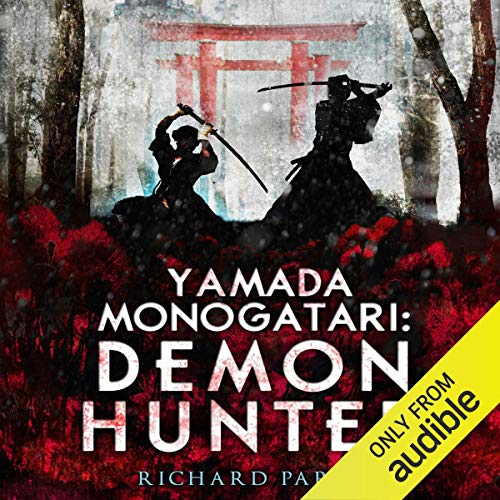 In an ancient Japan where the incursions of gods, ghosts, and demons into the living world is an everyday event, an impoverished nobleman named Yamada no Goji makes his living as a demon hunter for hire. With the occasional assistance of the reprobate exorcist Kenji, whatever the difficulty - ogres, demons, fox-spirits - for a price Yamada will do what needs to be done, even and especially if the solution to the problem isn’t as simple as the edge of a sword. Yet, no matter how many monsters he has to face, or how powerful and terrible they may be, the demons Yamada fears the most are his own.

A mixture of Dresden Files and Japanese folk tales

Impoverished nobleman Yamada no Goji is a demon hunter in an ancient Japan, where the existence of ghosts and yōkai is a fact of life. His craft is difficult and requires intelligence and understanding as often as it requires his blade or tailsmans and his trade draws him into the schemes of humans seeking power, as well as those of the demons themselves.

This book has a lot going for it. The main story is broken up into a series of interlinked shorts, each involving a different task. All are plot heavy and there wasn't a point in the book that my interest wasn't held. The characters are good, the descriptions beautifully written and the mysteries intriguing.

Brian Nishii's performance was impressive, partly because he can clearly speak both Japanese and English fluently, helping evoke the setting of the story. He has a great voice to listen to and I really enjoyed the way he acted out the parts of the different characters.

There are two reasons this is a four star, rather than a five star listen for me. The first is that earlier on in the book both author and narrator fail to give a completely credible impression that the world we're visiting is ancient Japan. The language and the way the hero speaks are a bit too modern at times and the narrator also often lapses into a more Americanised accent for the hero. Also, it didn't give me what my audio-book group describes as a 'book hangover', that feeling where nothing else seems as good and you can't wait for the next one to come out.

Overall if you only have one credit a month and don't get through many books a year there are better fantasy books out there to spend it on. On the other hand if you read a lot like myself and enjoy paranormal fantasy books with plot as well as punch, I really recommend this.

The story. Little clues here and there that later turn out to be huge clues because of the way the main character engineers things. It's very derivative.

What could Richard Parks have done to make this a more enjoyable book for you?

Have you listened to any of Brian Nishii’s other performances? How does this one compare?

Could you see Yamada Monogatari: Demon Hunter being made into a movie or a TV series? Who would the stars be?

Brian Nishi is the only good thing about this book. Brilliant as ever.

If you want a very simple, drab sort of story to listen to, one that'll help youget to sleep, but this book!

This is a series of short stories presented in order. There isn't a lot of spells and sword play being done. Instead our hero is a down his luck noble who is hired or finds demon related jobs. This novel gives an insight into demons and the like from a different culture. The setting is in an ancient time. I enjoyed it a lot. I especially enjoyed narration by Brian Nishii. It is obvious that he has some degree of being bilingual. But his voice is English speaking with the foreign words being spoken correctly. This adds an enjoyable flare to the stories. I recommend this for those looking for something different.

I had great hopes for this book but i was sorely disappointed. The main character is supposed to be a Demon Hunter as the title suggest but he is more like a Demon Soother He brings comfort and well tiding to monsters everywhere. I can literally count the number of times he use his sword on one hand. Now don't get me wrong I love a good story where the hero uses his mind instead of brown. But in every situation the problems were so simply solved that the people with the problems should have solved them long before he ever arrived.
Plus all of the spell work and important life saving stuff was all done by his side kick a disreputable monk. who is like Watson to his Holmes.

A new kind of fantasy world

What an entertaining group of fantasy mysteries!

The feudal Japanese setting mixed with Demons, ghosts, court politics, and mystery wasn’t the angle I expected when I picked this book up. I was so pleased, short consumable stories, with a pair of broken heroes to guide us through a little more of the world they inhabit in each story, so well done and satisfying. The narration was excellent, voices consistent across the stories for repeat characters, 5* performance. If you are looking for an enjoyable book that leaves you wishing there was more, pick up this little gem.

A very enjoyable way to experience Japanese history and myths. this book is a mix of a Japanese myth and legend anthology and Sherlock Holmes detective stories.

It was like short murder mysteries written in time of the samurai. I wish there were more.

Picked this book up on a whim, and man I was caught up in the characters and stories! This is such a great book. So glad I read/listened to it!

The best way to describe Richard Park's first installment in the Yamada Monogatari series, Demon Hunter, would probably be as a pre-warring states era japanese Sherlock Holmes for supernatural incidents.


The book is set up as ten short mysteries, not directly connected to each other, but still following a single thread (as in they are set after one another). It was something I wasn't expecting going into the story, but it was not bad, and I actually quite liked it.


There are only three reoccurring characters in the series (four if you count a certain fox that is introduced in the first chapter and takes a role in the last), but that doesn't stop the other side characters to feel unimportant, and they're all well descibed and developed.


The main character, the fallen noble Yamada no Goji and his assistant, the drunkard priest Kenji, have a very nice chemistry, not entirely unreminicent of the famous Sherlock Holmes and his partner Dr. Watson.


I very rarely read mystery novels. Almost never in fact, so I cannot claim to be an expert on them, yet the feel I get from having read it, Yamada Monogatari feels more akin to the mystery style of Sherlock Holmes, or at least the way I've gotten it described to me. As in, the mystery itself is not the main part and is usually not meant to be solved by the reader, but rather by special circumstances and the detective's intellect. However, in this case the detective is not an unparalleled genius, but more of an expert on the supernatural, or Yokai.


The setting of the book is quite interesting, since most western novels set in Japan, that I know of at least, are mostly set in the warring states era, or later, yet Park decided on the time right before, and will probably follow the rise of the samurai throughout the series' progression. It also adds on the fact that Yokai (essentially monsters and ghosts) and Kami (gods, or rather nature spirits) are really, making the mysteries presented have another dimension to them.


For the most part, the book was a great read, however I do think you need to have some basic understanding of Yokai and some knowledge of historical Japan to fully enjoy this book, but lost things are explained as they appear,so this knowledge is not nessesary, it would only make the reading experience more fluent.


Overall, I'd like to give the book a solid 7/10 for an interesting experience.

This is the perfect book for light reading, I.e, for when you’re listening to a book but focusing on other things. It takes place in a series of short stories, and it’s easy to follow.
If you’re like me and have hundreds of books in your various audio libraries, then you will appreciate this as a
good beach book or vacation book.

Uses the tropes of traditional Japanese supernatural to tell thrilling stories involving characters we care about.