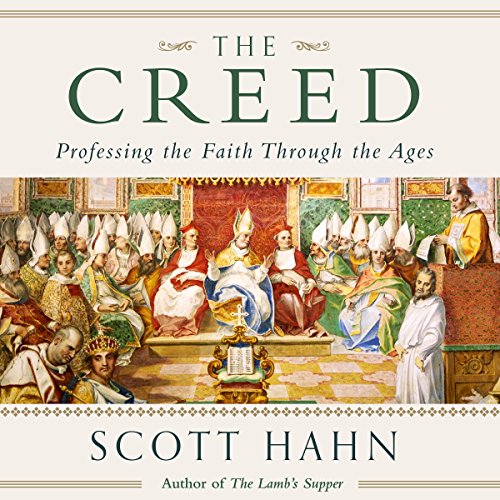 Why were the early Christians willing to die rather than change a single iota of the creed? Why have the Judeans, Romans, and Persians - among others - seen the Christian creed as a threat to the established social order? In The Creed: Professing the Faith Through the Ages, best-selling author Dr. Scott Hahn recovers and conveys the creed's revolutionary character.

Tracing the development of the first formulations of faith in the early church through later ecumenical councils, The Creed tells the story of how the very profession of our belief in Christ fashions us for heavenly life as we live out our earthly days.

What listeners say about The Creed

The Creed have open my eyes to the beauty of our Creed. I highly recommend this.

Scott Hahn does an excellent job of showing how the whole of Salvation History is faithfully contained in the Creed. A must for anyone who is serious about understanding the faith of the Church founded by Jesus Christ and handed down through the apostles.

I am taking Catikism classes & this book is helping me to understand what they are talking about in class. My family wasn't really religious when I was growing up, so this book has answered a few questions I have had.

didn't put it down wonderfully written on where each part reflects Scripture from the Bible. A must read.

A very good listening and plan on getting the book

I have many of Dr Scott Hahn's books and this one by far is the most fascinating one I heard on on audible so far andthis being my first time using audible, I do plan on buying the book.

Scott is great for converts to Catholicism like me.

He so carefully clarifies the creeds of the church and their significance that you are drawn deeper into the faith. He can do that because he, like me, had to struggle through the process of going from Presbyterian minister to Catholic bit by bit. He does this so well. At the end, you are drawn closer to God through the creeds.

Some good information but like a not so good chowder, too many potatoes, little meat.

Light on history, great on doctrine/presentation

A great introduction to the traditional Christian creeds, and some historical context. Probably ideal for someone who heard the cterds growing up but never had their depth explained.

I was hoping for more of the story of how the creeds came to be in a historical sense, but I still greatly enjoyed listening to Dr. Hahn.

Even when his writing didn't quite align with my expectations, I still felt like it was worth my while to listen.

What did you love best about The Creed?

Excellent presentation of material on the subject of the book. The material is accessible but not simplistic and can really help one grow in their understanding of not only Christian belief, but the importance of articulating it in concise formulas.

What other book might you compare The Creed to and why?

The Creed is similar in style to Hahn's other books.

He is a prayerful man of deep convictions who allows his life to be transformed by the truths he explores in his books. It is deeply edifying to listen to this material by the author who is not simply performing, but sincerely wants the listener to understand and experience the life giving power of the truths in the book.

Why Christians State What They Believe

Would you consider the audio edition of The Creed to be better than the print version?

I've had the book for months and have only gotten part way into to chapter 2. After a week with the audio book, I was already done. It's so much easier for me to find time to listen than to read. A book for which I have time is much better than a book I have no time to read.

Dr. Hahn does a great job of presenting the history of the how Christians have used creeds to protect the understanding of what God has revealed about Himself from being corrupted with errors (which were many throughout time).

What does Scott Hahn bring to the story that you wouldn’t experience if you just read the book?

Dr. Hahn is a great speaker, so his own voice inflection and passion helped bring the book alive.

As a non-fiction book, it was good to digest it in pieces--mostly as I drove back and forth to work.

Have you ever wondered how the early Christians fought off not only physical persecutions but also serious errors in teaching (both from within and from without)? Read this book.