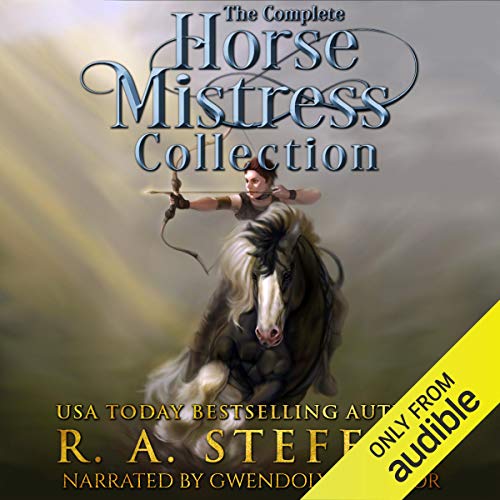 Carivel was born female, but she has been secretly living as a boy for years in her adoptive village of Draebard. The last thing she needs is to fall for not one, but two unattainable men—a fierce warrior and a reluctant wolf-shifter with a horrific past. Now, the Alyrion Empire is poised to invade, and Carivel must choose whether to keep her secret or reveal it—not only to the men she loves, but also to the powerful female ruler whose army could help protect Draebard during the coming war.

Steamy and spellbinding, The Complete Horse Mistress Collection combines detailed world-building and a heartfelt romance between three noble, damaged people who have no one to turn to but each other.

The Complete Horse Mistress boxset contains Books 1 -4, as well as an exclusive series epilogue not available anywhere else—"Return of the Wolf". That's four full-length novels and a bonus short story for the price of a single audiobook.

What listeners say about The Complete Horse Mistress Collection

An exceptional piece of story telling

My first piece of advice... if you don't like anything other that vanilla sex, then don't waste your time going any further with this title.
My second piece of advice... get the box set a you get additional content on top of the massive value for money price.
I found this title by chance and I'm so glad i did, so much so, that I'm on to the lion mistress and will definitely be continuing with the dragon mistress!
there's only so many times I can say excellent/amazing/brilliant/fantastic/awesome... you get the picture, so I'll say this...I loved this book and I love this author!
The narrator was unbelievably talented with the verity of voices and accents AND put emotion into her performance in a way I've never heard from anyone else before, I felt like i was in the story with the characters every step of the way.

The world of the Horse Mistress is vivid and engaging. It is set in a world similar to Britain of the Druids at the time of the Roman invasion. It concerns three main characters who find each other, and against all odds fall in love and become the best versions of themselves.

Our characters are Carivel, the titular Horse Mistress, who has been living as a man so she can do the job she loves. It’s not just a story of cross dressing as she has always felt that she was born in the wrong body. Andoc is the warrior, who contrary to many warrior stereotypes, is kind and nurturing. Senovo is the eunuch priest who resents his forced castration at the hand of slavers and fears the wolf that is the other side of him that comes out in times of stress.

As the collection begins, our characters are thrown together because of a devastating attack on their village that leaves them in positions of new authority. Through the set of four novels, they must learn to cooperate both personally and professionally with each other. They do everything they can to make sure they invading empire doesn’t take over their island. They also navigate the tricky waters of having a three-person relationship built on communication and true feelings for each other.

The fantasy setting for this story is very approachable. The characters feel real and familiar without being directly from out history. It would be kind to those readers who aren’t yet sure if they want to give the fantasy genre a shot.

As for the narration, Gwendolyn Druyor is wonderfully gifted. I do most of my book consumption through audiobooks, so I have heard many performances from big name narrators to those with only a few indie titles. Druyor did a few things with this 1st person narration that I just hadn’t heard other performers do. For example, when Carivel finds things funny even in her narrative bits, Druyor’s voice subtly shifts so we imagine a laugh could follow at any second. When recounting a different character’s dialogue, if the person is yawning, we hear that. If the person is eating or has something in his mouth, we hear that, too. Druyor brings the sounds of life to this audio and makes it compelling and engaging because of it.

I definitely recommend both this author and this narrator. The series was an unexpected find that is full of action, adventure, humor, pathos, and blistering scenes of intimacy. The audio performance makes it that much better. I plan on seeking out their individual works in the future, and I suspect they may work together again on the connected Lion Mistress series set in the same world.

A content note: This complete collection has an epilogue short story that isn’t available anywhere else. If you are going to go through the trouble of reading or listening to any of the novels in this set, do yourself a favor and buy the complete collection. You save money and get more content. Win-win for all.

Disclaimer: I received a free copy of this audiobook from the author in exchange for an honest review.

This will not be everyone's cup of tea. If you are open minded and you can really get to know and understand these characters. The entire book was written well. While there is graphic sex that sex is not the point of the book. Even with all sex was removed or played down this is an unusual and beautiful story of love and self acceptance.

The performance however is amazing

Just a bit to much sex

I love a good romance as good as the next person, but when the encounters go into several chapters and are a bit over the top on crud...umm no, I do however love the story line and had great potential, but really?? It got a bit annoying to have to move forward to get back on the story itself....to bad, it had some really great characters ..not going to go any further on this series.

Love the idea, hate the execution.

Honestly nothing wrong with a person feeling like they were born in the wrong body but for her to be terrified of being penetrated; to love these two men but want to be a man and also not have to go through with intercourse but want to be "accepted" despite being a female.....too much!! And why would the village hate her so much? She didn't cause any problems, stress or harm to anyone by pretending to be a dude. I'm over this.

what a wild ride

This is by far one of the wildest books I have ever read/listened to. I liked the plot in its entirety, the characters were believable, the only thing I didn't really like were the love scenes. For me, a couple of them just didn't move the story along, I don't feel like they added or took away from the characters or the storyline. It just felt like fluff. Aside from those couple of scenes I would recommend this series. I very thoroughly enjoyed it.

Well written and well read.
Just the right amount of tension and few spots where you want to smack the characters and tell them to get get back to their lovers.
One of the best poly stories I have seen in quite a while. Nicely balanced.

The truth! It was well written and exceptionally narrated. You have to have an open heart and mind to fully enjoy it.